Today we take a closer look at a compact heatsink from Silverstone, their NT05 is designed to give a very good performance/size ratio and to test this we used an Antec Aria with an Athlon 64 system to see how cool this heatsink can keep the CPU.

Installation on either S775 (Intel) or S939 (AMD) requires some manipulation, for S939 the heatsink uses the two mounting holes around the socket, the standard heatsink back plate remains in place and two screws (with springs) are used the secure the unit in place. On the MSI motherboard we used for this test the back plate is slightly different from the reference design, the mounting holes are smaller (in height) and the screws were to short to reach these holes, swapping out this custom back plate with the a reference AMD one fixed this issue, but do keep in mind that you have to check what type of back plate your motherboard has as the NT05 doesn’t come with one.

With NT05 mounted all you need to do is hook up the fan, it takes it power from a 4-pin PSU connector and has an RPM connector for the motherboard sensor. The fan controller plugs in a custom connector close to the side of the fan.

We would like to have tested the Thermalright XP-90(C) but unfortunately it didn’t fit inside the case:

So for comparison we’ve included the default AMD heatsink which is delivered with all single core models and dual core models below X2 3800+ (3800+ inclusive), it’s a rather simple aluminum block with a 70mm temperature regulated fan on top. The second AMD reference heatsink used comes with dual core models above X2 3800+ as well as dual core Opteron units. This upgraded heatsink features 4 heat pipes, a copper base and 80mm fan which is also temperature controlled.

In the first test the onboard VGA was used, a dBA meter was placed at the ~10cm from the right side panel (the side of the CPU fan). Room temperature was 24°C during the tests. 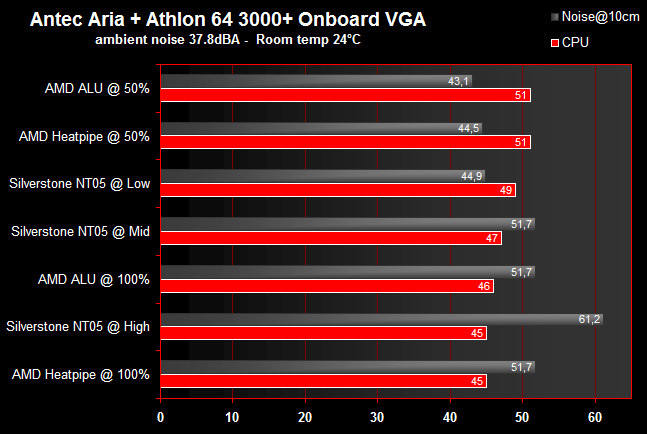 This motherboard from MSI offers no control over either CPU vcore or HTT speed, so no overclocking action, what we did to increase the heat was add a Powercolor X800GTO, in small case like this it will surely effect case temperature, let’s see how the CPU coolers hold up. 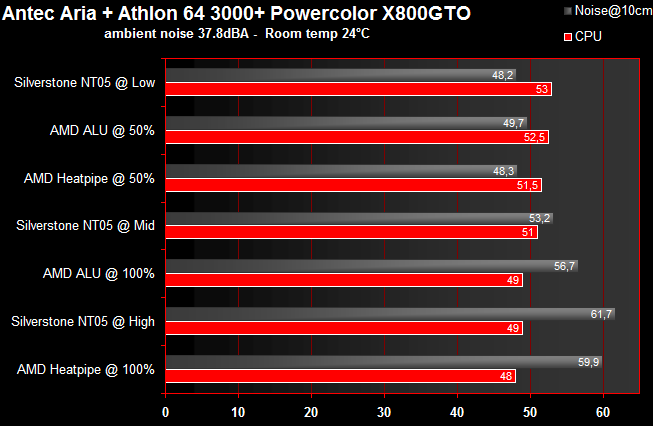 Priced at about ~€30 it’s offers an alternative to the default cooling if you are in need of a compact heatsink, the NT05 doesn’t improve performance over the default AMD coolers in our test setup, but with the fan controller set to low you can get a near silent system without risk of overheating the CPU. The installation is not plug and play but is simple nonetheless; the lack of AM2 compatibility is a drawback and we hope Silverstone can look into this.

We like to thank Jurek from Silverstone for setting us with a test sample.