In-Win began over ten years ago in 1985 fabricating PC-chassis, today were testing their 460W PSU solution which uses a 12cm lighted fan for cooling. At 150x86x140mm (W/H/L) the unit is diminutive and will fit any ATX case. Stay with us as we discover if the In-Win 460W packs a performance punch.

In-Win located in Taiwan, has been building PC-chassis since 1985 and began designing PSU's six years ago. Essentially 21-years would classify In-Win as a pioneer in the chassis fabrication department when you consider the PC-industry is still in its adolescence and some might say infancy. Econo-centrism often distorts thinking such that many American's upon learning a product is built in "Taiwan" incorrectly assume it's somehow inferior. While it's true Big Blue built the first computer placing the birth of the Computer in the US, so too did the Automobile industry begin here. We all know how that story turned out. In-Win hasn't been a household name in the USA; however, that may soon change. 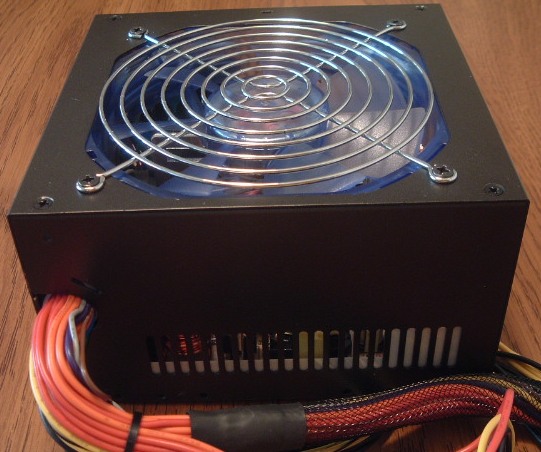 The In-Win IP-P460 Q3-2 460W arrived in a box as unassuming as the PSU itself. Thankfully In-Win doesn't assault their customers with marketing fodder plastered all over their box, including depictions of scantly clad female Anime warriors swinging a spiked Medieval battle Flail crying out "We crush the competition." Obviously if a PSU maker to weld spikes to their PSU, attach a chain and handle then proceed to CEBIT wailing through PSU maker booth’s, they would literally be "crushing the competition" In-Win has chosen a more civilized advertising approach. Still they couldn't help themselves and chose a symbol for their circuitry using a little man holding a lightning bolt over his head, withy the moniker "Power Man." 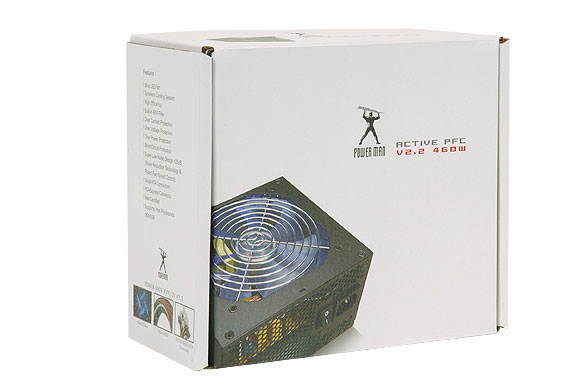 The IP-P460 Q3-2 is well packaged and wrapped in the best bubble-wrap bag I've seen yet. While this may appear trite or patronizing, given the distance these PSU's travel and the fall-out when a customer gets a DOA unit these details are important. The unit arrived in perfect shape; the box also contained a multi-language manual, 20-pin/24-pin adapter, mounting screws and an 18AWG power cord. 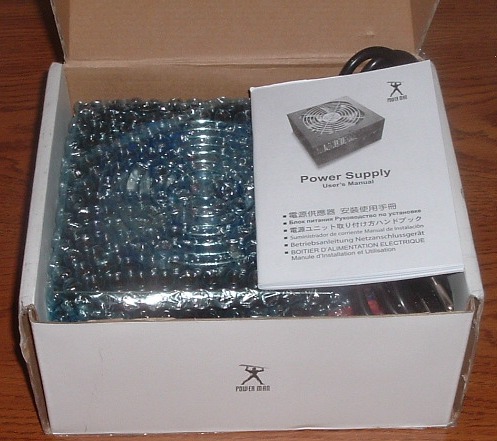 Removing the PSU from its packaging reveals In-Win took a straight forward approach to their P460. The unit is compact and its 120mm fan occupies nearly all of the PSU enclosure. IN-Win used classic cabling over a Modular design which we'll discuss in detail later on. The appearance in flat black paint is clean looking and should accent the blue LED fan nicely. 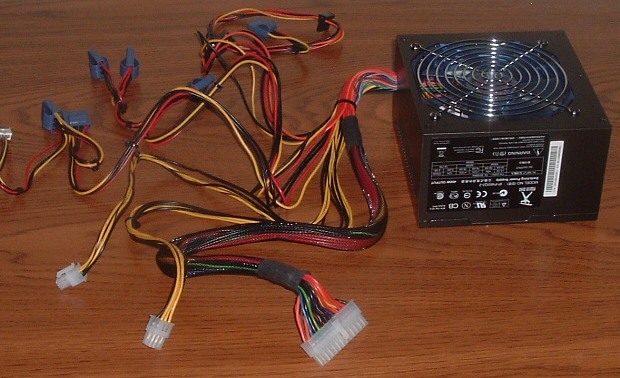 The now infamous "Split Rail" circuit design, which basically states any PSU which utilizes more then 18A on the 12V-Rail will provide an additional 12V-Rail which is not to exceed 18A, thereby maintaining a 240VA current limit. This ranges from 18A maximum to a 22A max on the 12V4 rail at 800W and total amperes for all 12V rails at 800W no more then 64A, 70A Peak. For the 12V-rails which are the only rails which present a electric shock hazard this is accomplished by "splitting" the 12V rails from their single 12V-transformer so that they originate from independent sources at the PCB. Needless top say this has handicapped PSU makers wherever their attempting to increase amperes for today's power hungry Dual Core CPUs. Below we see In-Win has followed those specs. 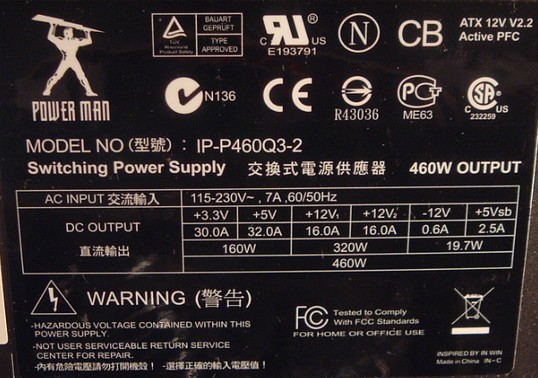 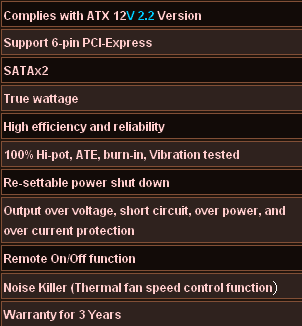 The P460 is not intended as an SLI/Crossfire ready PSU. The unit features Active PFC (Power Factor Correction) circuitry and follows the "split rails" guideline providing 19A maximum on the 12V2-Rail (CPU). The additional current will keep your CPU running stable when it counts, overclocking as you'll see later on. If In-Win chose not to follow these guidelines (it states in the guidelines no PSU maker is obliged to) the P460 would offer a single 12V-Rail at 34A if we interpret the 16A 12v1 and 19A peak on 12v2, this would surpass the OCZ Powerstream 520 at 33A? Compare the Ii-Win I460 specification above to the OCZ Powerstream Specifications (.pdf). The Efficiency rating on the In-Win is rated at >75% efficiency. Of course there's more to these specifications then raw numbers which is what makes the PSU industry so ambiguous to the layperson.