6 different VGA coolers are tested in our latest roundup, products from Arctic Cooling, Sytrin and Zalman stressed using an XFX 7800GT running at default and overclocked speeds, while each heatsink is tested at different fan speeds and GPU temperature and noise readings are recorded. What cooler will suite you best? Read on to find out.

The XFX 7800GT video card was kindly provided by Comtechnology.be

The system was installed inside an Antec Lanboy, a mid-sized tower case made of aluminum, it doesn’t come with case fans, but supports 2x80mm (1*font/1*rear) – I placed a very silent Sharkoon Silent Eagle 1000 in the rear running at 12v.

I placed a dBA (AR824) meter next to the closed side panel at approximately 10cm; without the system powered on the ambient noise in the test room measured 35.6dBA (in the photo below you’ll notice that even the slightest noise of the camera is picked up). When the system is powered on without a VGA fan running the noise increased to 37.8dBA. Some VGA coolers dropped below this noise level making them extremely silent (~2dBA over ambient isn’t particularly bad).

I placed a thermal sensor at the in-take of the case measuring the temperature of the air that’s being pulled into the case, with the case closed the ambient temperature inside the case easily surpassed 25°C with in-take temperature at 23°C. The closed environment leads to higher temperatures for all coolers, testing them inside a case gives real-world results which will differ quite a bit from those tests done outside a case.

Outside a case there is plenty of cool air for the cooler’s fan to blow onto the heatsink, inside a case however the air blowing onto the heatsink will be higher causing higher GPU temperatures (logical) but not all coolers behave the same when changing inside/outside testing scenario. It’s not like you can simply add X°C to all your results and be done with it.

To test the impact I tested the Zalman VF900-Cu and VF700-Cu with the case panel off and measured the difference: 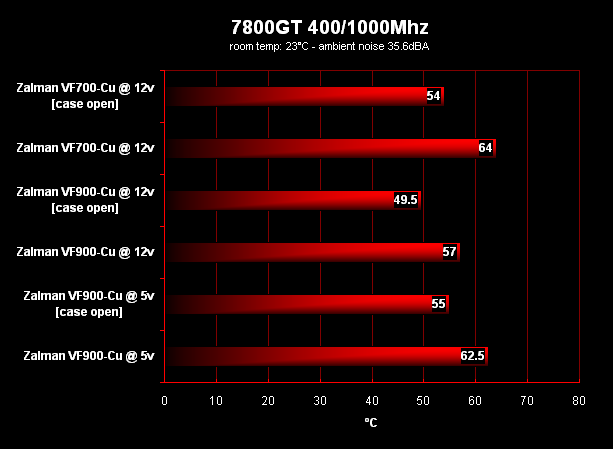 So choosing to test the VGA coolers inside a case will indeed give a more realistic overview of their performance.