It?s always a pleasure to review equipment that you never have tested before, certainly if you have just the right setup lying around. A heavy storage server in 3U rack housing? I-Star?s D-300 believes it can be done!

Maybe it's not such a good idea to go discuss the looks for a server case, better call it structural integrity… with a layer of paint! Why would anyone care about how his server, which is located in some rack at the other side over the country, looks like? Even our [M] server has some weird kind of brown color nobody ever heard about.

Here is a first curiosity. The paint on the front is so raw you can write on it with your fingernails. What does it spell? That's right, [MAD]! The overall paintjob is pretty good, better than you would expect from rack housing. However, it's not as good as a tower model, on the inside there are traces of paint from when it way sprayed on.

Doors closed and doors opened. By turning the lock sideways the doors are shut in place. Of course it's only a generic lock, easily opened by any expert but for keeping people away from your removable disks it serves its purpose well

The dust filters are removable and washable. Over the four weeks of continuous uptime, these became dirty but not as dirty as the ones that were in front of my intake fans. This means they hold back some dust, not quite enough. Some improvement here could be nice, as dust is one of the factors that lead to a sure dead a 24/7 server. 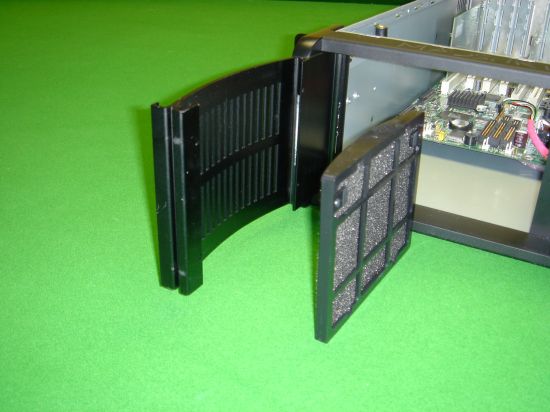 Now let's remove the cover: shiny internals. The two front containers are left out on this picture to give a better look at the internals. 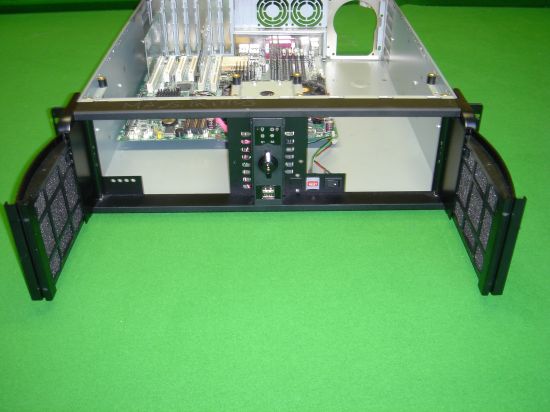 The leds, the lock and two USB ports for easy access. I don't really know if they have any positive use on a server case, someone can easily hook up a disk and steal all your data this way.

Extra Comments by Jay-Jay (our free-lance IT Tech): Front USB is quite handy, you don't have to muscle yourself behind the racks if you want to install something like say a network driver. Server rooms themselves are mostly secure enough. But maybe they could have put them behind the lockable doors for increased security. 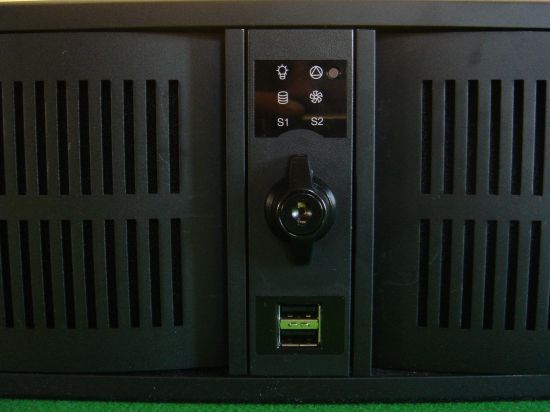 Warning! The red RESET button, only to be pushed in emergencies. A nice pro over any other generic pushbutton. Sure makes you think twice before rebooting the machine. 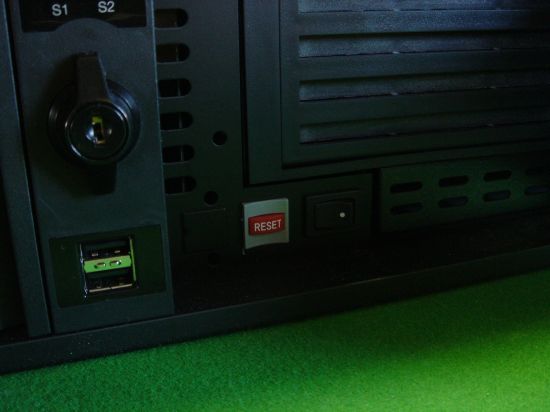 Like any rack housing, it has these grips for easy handling. I carried this case back and forth a couple of times and it feels very sturdy. However, the rails were missing which was strange since what can you do with this case if you have no rails? 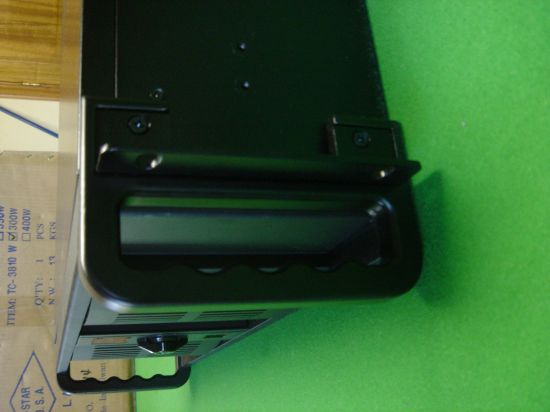