After serving you very well for a few years, the boxed Pentium 4 cooler has become noisy. And you just want something new and better...
Spire is offering some very budget minded coolers, one of them is the QuieTude VI. How does it stand against the boxed cooler ?

Although Spire was founded in 1991, it's PC coolers are not highly accepted by computer enthusiasts, particularly amoungst overclockers. But, the price may attract many others. With production facilities in China, Corporate Office in the USA and overseas branches in The Netherlands, U.K., Germany, France, Taiwan, Japan and Brazil, Spire is ready to provide the best service for the resellers and end users.

Nowadays Spire is offering a wide range of CPU coolers, computer cases/ecnlosures, power supplies and many more you probably will hear in the near future or found their products in the shop down the street near you...

Today I'll be taking a closer look at the SP495S11-U, a.k.a. Spire QuieTude VI. Manufactured for the budget minded computer users, the name reveals part of its' capabilities; Silence.

After a year (or more) of continuous usage of your boxed Intel cooler, there's a big chance that is has become noisy, producing a rattling sound, and filled with dust plus other terrible things.... This review compares the cooler with the Intel boxed unit in not only performance wise, but also the sound level and design closely.

Let's take a closer look at the cooler itself: 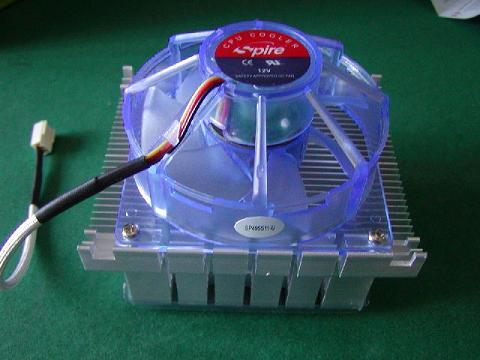 The cooler is packaged a basic designed box. Inside you'll find the heatsink itself, a short manual and two clips you'll need to install the cooling. There's no extra tube of thermal compound added, because a layer of TIM is re-applied on the heatsink base.

The cooler is made entirely of aluminum except a small part of the base, the center. But it’s hidden …
After cleaning the pre-applied thermal grease off, the copper core presents itself.