Over the last few years Thermaltake has transformed themselves from what I once considered to be a midline OEM supplier of heatsink/fan combos, into one the of most inventive companies on the market. I've truly enjoyed my recent experiences with Thermaltake products, where I'd once felt their products had great potential yet fell short in performance. This was based primarily on my experience with their original Volcano 7 which became an example in design futility (at least early on). The unit had serious potential as it was well built and one of the first ever HSFs to incorperate a thiermistor which dictated fan RPM based on temp. Problem was poor thermistor placement constantly slowed fan RPMs to a minimum unless case temps were exceedingly high. The end result; just about everyone who purchased the original Volcano 7 experienced high CPU temps because the fan wasn't producing adequate CFM, of which it had plenty to offer. Thermaltake eventually rectified the issue in later revisions of their Volcano series.

My first experience with Thermaltakes cases was their SHARK tower case which was one of the better cases I've tested. When I first saw their Kandalf which closely resembles their Armor (both in form and function) the case looked to be a potential winner. As soon as the box arrived, which was large enough to move into, I knew I was in for an experience. In the photo below you can see how it dwarfs the TTGI tower in the back ground. 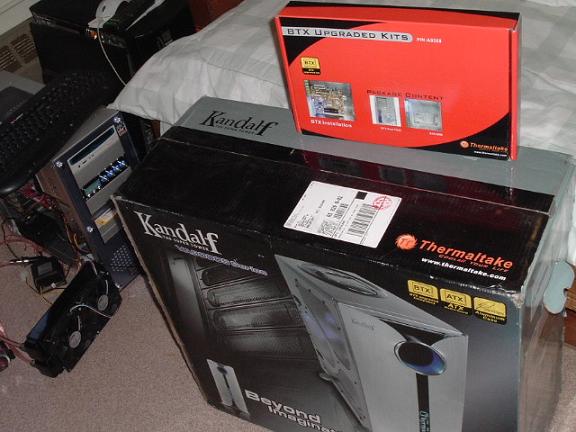 Thermaltake packages their cases very well and it arrived in perfect condition. In the photo above the included BTX kit was also shipped making the case future proof. Its reassuring when the box eschews fancy graphics for a simple digitized photo on the front and the entire reverse side is devoted to features. Thumbnails below detail box graphics and included hardware. The aluminum "arm" in the right thumbnail photo is used to secure the PSU. This is the first case where I've seen the PSU mounted on its side, a space saving idea which I'm surprised hasn't been used more often? Kandalf is constructed primarily of 1.0mm aluminum. 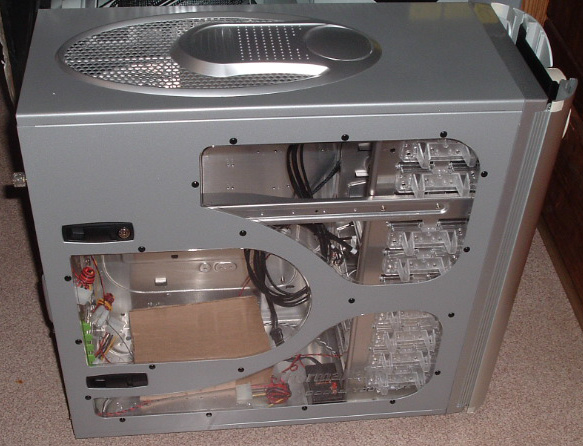 I was very happy to find a case in which I had ample room to work. Trying to reach into smaller cases can be very frustrating, especially if you intend to house a water-cooling system. In their concern for safety and thinking of the many Enthusiast's whom will be tinkering with a unit such as this, Thermaltake has beveled all edges. 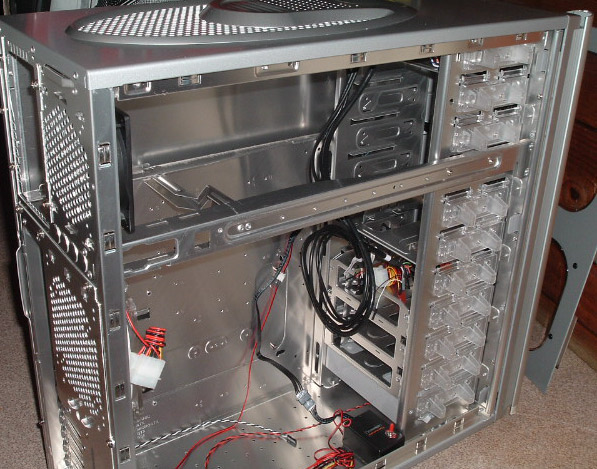 There are two (front/rear) HDD racks each can accomodate up to three HDD's. The upper rear HDD rack rests along the PSU and has a 90mm exhuast fan just behind it., it's easily removed via a clamp and hand fastener. The front HDD rack also doubles as the 120mm front intake fan's mount and this HDD rack can be re-positioned anywhere along the front of the case where there are bays. This allows you to experiment with the front intake fan's location and overall case air-flow. Note the clear retention mechanisms along the height of front rack. this Tooless design securely locks in any DVD/CD drives or other devices into the front bays. 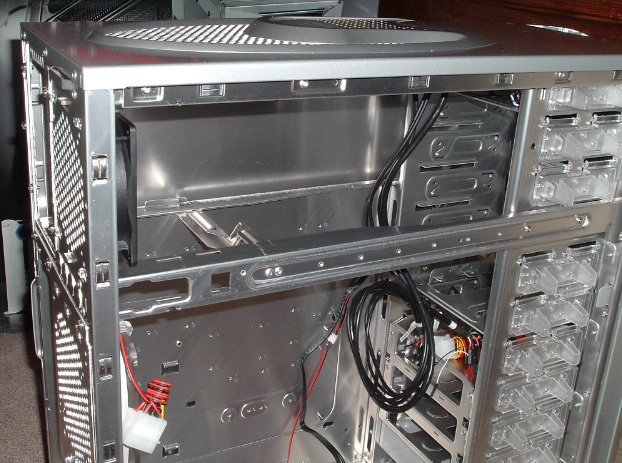 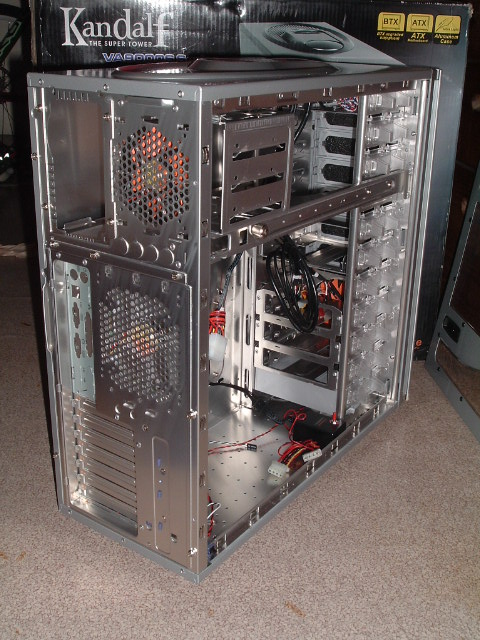 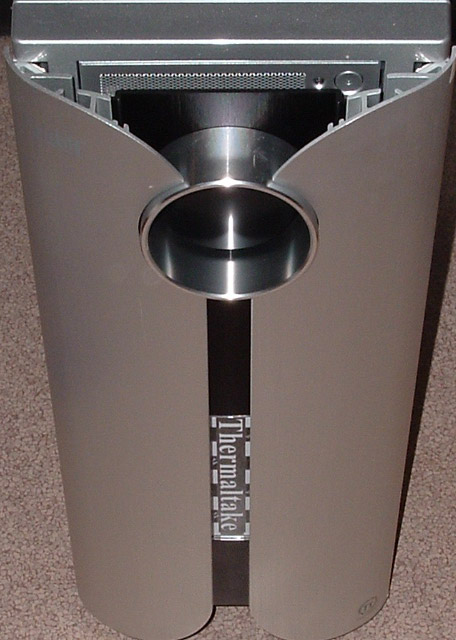 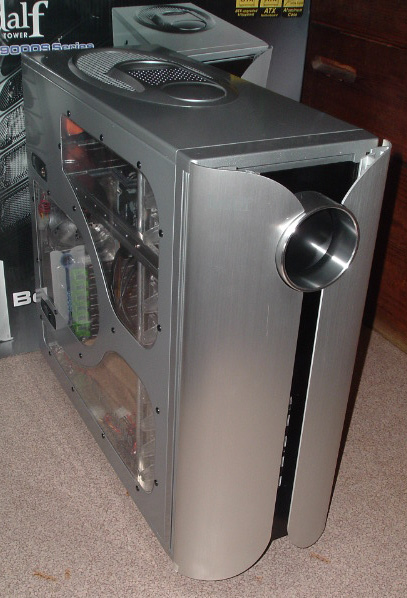 Swinging open the heavy "doors" exposes a stack design reminiscent of Server style cases. Kandalf accommodates as many as 9 x 5-1/4" bays the top (10th) bay housing Power/Reset switches and Power/HDD LED indicators as well as a floppy. On the very bottom hides a slide out storage drawer for CD/DVDs, tools, etc or can be used as your Fluffy's food dish (Thermaltake probably never thought of that innovation). Unfortunately what originally drew my attention to this case was the "illusion" up to three 120mm front intake fans can be stacked as intake fans. Once the case arrived I realized the image at Thermaltake's site was simply showing how a SINGLE 120mm intake fan can be positioned anywhere along the face of the front of the case. As your about to see on page-2 each bay cover doubles as an intake grill and each has a foam micro-filter behind it. 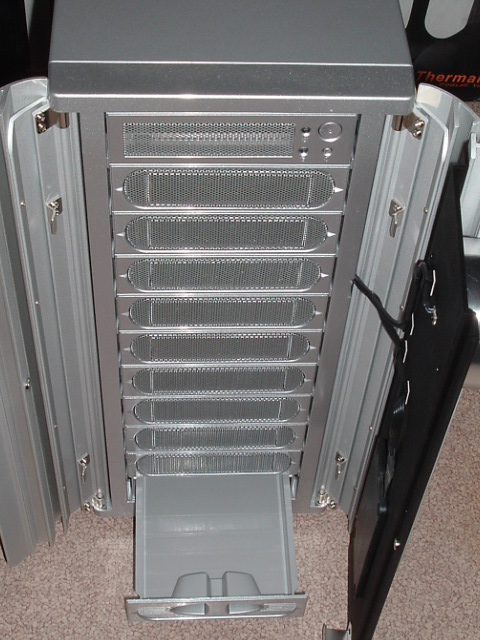 Depressing a small spring-loaded cover on the top of the case exposes 2 x USB, 1 x 1394, Audio and Mic connections. This is the only instance where a material other then aluminum is used (plastic). Just behind the pop-up access cover Thermaltake has mounted a internal 90mm exhaust fan. 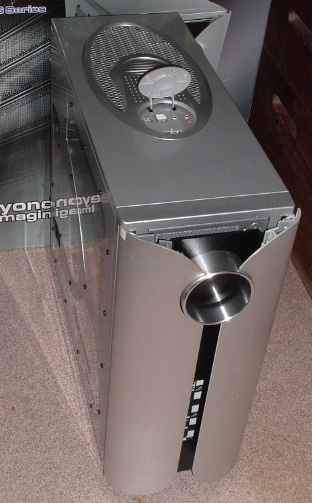 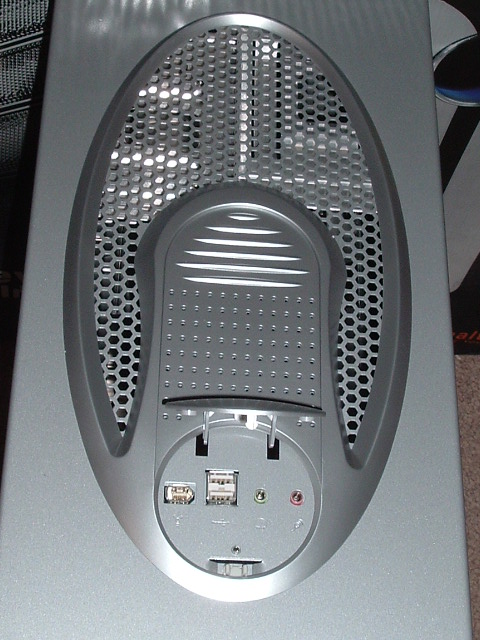 Onto the case mechanics, specifics and thermodynamics--->