Transcend makes memory simple, absent are the neon, anodized, reflective, platinum, copper, titanium, and heat spreaders capped off with a scrolling LED marquee displaying New York Stock exchange symbols. Transcend simply spec?s quality ICs mating these to a specific PCB for a given part and sells their products world-wide. Naturally this keeps overall production costs down and savings can be passed on to the consumer. Their PC2-4200 did quite well in our recent DDR2 Round-up and today we take it on a little overclocking expedition.

As mentioned prior the memory was tested at just about every conceivable CAS Latency, BIOS enhancement, and memory divider. The goal was to find the highest memory speed grades beyond default (533MHz DDR) while maintaining the lowest latency possible. Ironically the highest memory frequency did not always equate with the highest CAL Latencies. Stable was defined as passing all benchmarks included below, additional 3D, multitasking, and instances of S&M memory test.

I've included thumbnails below corresponding to CPU-Z screenshots verifying dividers, speeds, and latencies. I've translated FSB speeds into memory speed by its DDR spec. For example 15x265FSB give us a processor speed of 3982MHz and if we were to run the memory at a 1:1 ration the memory speed would be 285MHz or 572MHz DDR.

Multipliers and dividers can become complicated and the 925x chipset offers three, each accommodating a different DDR2 speed grade. DDR2-533 or PC2-4200 can be achieved from the JEDEC specific FSB or DDR speed of 400MHz DDR or 200FSB using the memory multiplier or raising the FSB and matching the memory's default speed at a 1:1 ratio. To do this we would have to raise the FSB to 267MHz or DDR533. The formula may seem simple enough, however; using a memory multiplier does complicate matters. For example employing the 3:4 divider we're able to run our memory at 354MHz (DDR709MHz) from a 265FSB at CL4-4-4-11. At the other end of the spectrum in the absence of any divider or 1:1 we increase speeds to 285FSB running our memory at 285MHz (DDR572MHz) yet are limited to CL5-5-5-15. VDIMM increases did not allow complete stability at tighter timings.

A bit of a conundrum arises pertaining to effects on latency when utilizing memory dividers. It seems logical if we're able to run the memory as high as 362.4MHz (DDR724) off the 3:4 divider while maintaining timings of CL4-4-4-11, we should be able to retain lower latencies running a lower memory speed. Yet at 285FSB 1:1 or DDR572 I was only able to run more lax timings such as CL5-5-5-15 ?

The answer may reside in the P5AD2E-Premium motherboard itself, in particular the way in which dividers change between 265FSB and 266FSB speeds.

From a prima facie perspective the divider change simply mitigates system load as FSB/CPU frequencies increase. How dividers, or more importantly, "where" dividers effect memory frequencies will be ad rem to our understanding the quandary above. 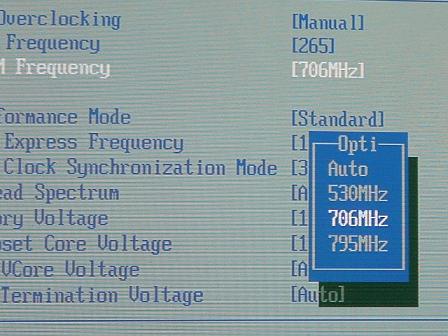 Inquiring about the results several "experts" told me to simply leave the issue alone. After all "Better to remain silent and be thought a fool, then to speak and remove all doubt."

Disregarding the aforementioned, my theory is that similar to Intel's PAT which arbitrates at the MCH (North Bridge - Memory Controller Hub), dividers also interpose at the MCH, ramping up frequencies which are then imperial to the overclocking effects one would normally see at 1:1. Maintaining a 1:1 ratio during overclocking places more stringent demands on the FSB and therefore on CAS-Latencies. A divider can then be thought of as an artificial boost and regardless of what one may think a penalty must be paid at some point. As seen below once the 266FSB is reached divider options change depriving us of a 2:3 option: 400MHz (Penalty), 533MHz (1:1) and 711MHz (3:4). I would appreciate feedback on this issue; 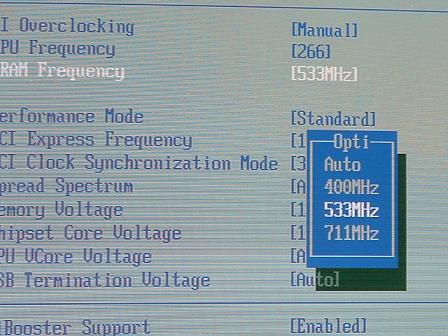 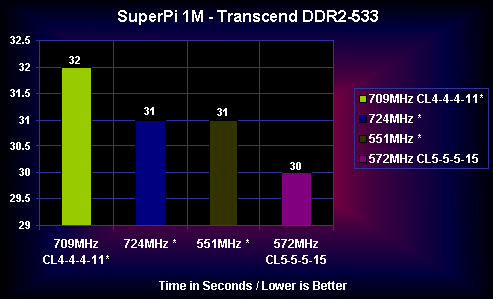 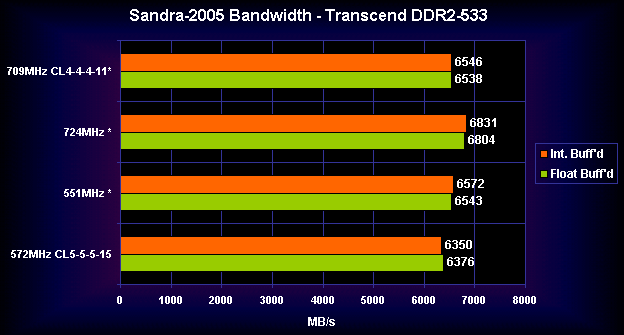 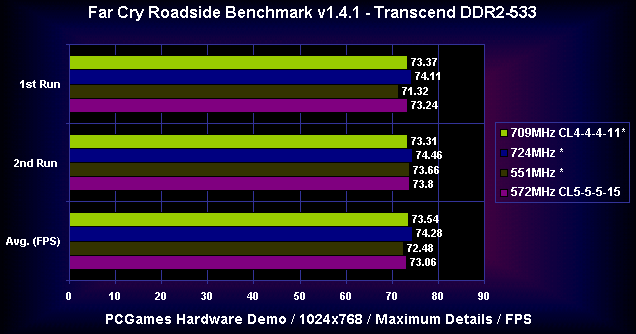 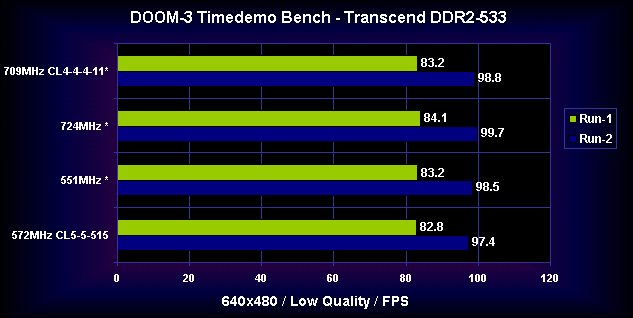 I believe we have found a valuable Overclocking part in Transcend's 512MB DDR2-533 or PC2-4200 modules. As our results show we have a part which exceeds PC2-5400 (DDR2-667) performance at CL4-4-4-11 and most importantly without the need for any voltage (VDIMM) increase.

This is most likely indicative of Transcend using ICs found on other PC2-5400 parts, although it’s difficult to validate this because more costly competition has their ICs buried beneath heat spreaders. Removing your Heat spreaders is not recommended, unlike DDR where there’s a probability you may damage the memory in the process, with DDR2 this is almost a certainty.

Transcend has earned a place in the overclocking ranks and their products deserve some looking into. The price of these modules from Transcends Online store is just $67.40 per 512MB module, or $140 for 1GB total. This has to be one of the least expensive 1GB PC2-4200 options available and there's very a good possibility you'll end up with PC2-5400 performance for the price.

Eschewing the need to raise VDIMM we've found a product which harkens back to the days of traditionalist (budget) minded overclocking. This memory is Highly recommended!.

I would like to thank Amanda for all her help and stay tuned for our Transcend 2GB review where we combine two 1GB DDR2-533 modules. At just $130 each these may be a great 2GB DDR2-533 option for fewer than 300 clams.