Arctic Cooling, maker of the coveted VGA silencer series also make PC-cases. Where thermodynamics and air-flow are concerned their Silentium-T2has to be one of the most astute engineering designs we?ve seen. The case is an all steel affair sporting a slightly under powered integrated 350W PSU and is relatively small, but still may have some serious potential. Let?s just see how much.

Arctic Cooling is an International company headquartered in Switzerland, with offices in Hong Kong and manufacturing facilities in Asia. The company was founded in 2001 and their company-profile states their objective is to manufacture "trendsetting" thermal solutions for Personal Computers.

Given the unique design attributes of the Silentium-T2 and their recent success with the VGA-Silencer series, Arctic Cooling seems to be heading in the right direction. While the Silentium-T2 is a well intended design its execution and performance offer up some troubling characteristics. Perhaps I'm guilty of a fundamental error in any "scientific" process, ethnocentrism, however; I was somewhat concerned to find a 350W Seasonic integrated into a chassis diminutive in size.


As an American I love my country, unfortunately I fear we have strayed far from the principles of equality this country was supposedly founded upon and that document which began "we the People..." It's now been twisted into "How MUCH can 'We the People own, spend, how wealthy can any one person be." Point being we are used to excess and waste, our homes are some of the largest in the world per square foot and we have little concern for natural resources.

While this isn't Sociology 101, where and by whom a device is designed will literally shape that device. The most basic prima facie example, US vs Euro electrical specifications.

Arctic Cooling's Silentium T-2 has been designed from another mindset. While I wouldn't insult any one country by by prejudicial misconceptions, Swiss Engineer's designed the Silentium and it's therefore geared twoard the "Euro" way of thinking. Americans whom ofetn visit European cities are taken aback by such sociological aspects such as the size of Flats. Don't misunderstand me I absolutely love European or German watercooling systems based on "Low Flow" designs and 10m tubing. Compact and highly effective one gets ergonomics resembling a work of art. So will a case designed by a Swiss Engineer appeal to the American mindset? An even better query may be, when will we as Americans infamous for being a wasteful society going to start thinking "Green"? Will we be forced into efficient means of PC-cooling nsuch as H20 after we've melted the Polar Ice Caps via the burning of fossil fuels to power our homes? Picture you and your PC bobbing in the Ocean (yet 20 miles inland) praying for waterproof WiFi?


The Silentium T-2 arrived fairly quickly which I always appreciate especially since so many product requests simply go unanswered. At the risk of further verbosity I dedicate this proverb to all those PR's whom fail to return emails;

Waiting is worse then knowing, knowing rends the heart cleanly so that it may begin to heal. Waiting shreds the spirit. (and could manifest itself in a writer unintentionally bashing a product (unintentionally of course)).

Arctic Cooling packs their products well as the case arrived in perfect condition however, the outer box was somewhat worse for the wear. 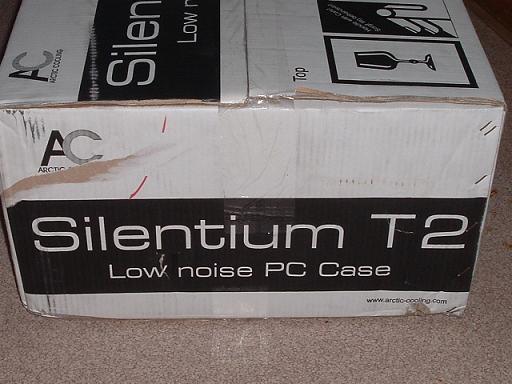 Thanks to Arctic Cooling's excellent packaging the Silentium-T2 survived this tossing across the Pacific and cross country without a scratch. Upon opening the box everything was in perfect shape and I was pleasantly surprised by the adding of a thick black foam insert on the bottom. I bring attention to this subject because the T2 is shipped with a 350W PSU inside and to have one or the other damaged is no fun. 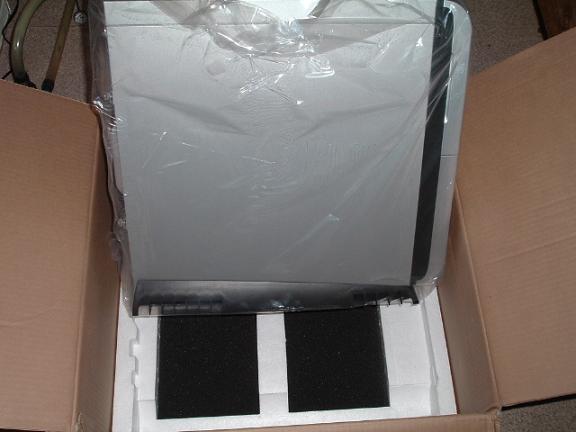 After removing the plastic bag which protects the unit from moisture and scratches I angled the case bottom upwards to view its unique base plate architecture. Notice the small vents on either side, which are critical because the base is literally the basis for its cooling prowess. Removing the base plate reveals the primary air-intake (rear) and the PSU / secondary exhaust (front). This is the first case design I've seen which places the primary air-intake at the very bottom and for that matter an exhaust at the bottom as well. Speaking from a thermodynamic perspective, unless you have a radiated floor-heating (which are becoming more common) there's no cooler air then at floor level. 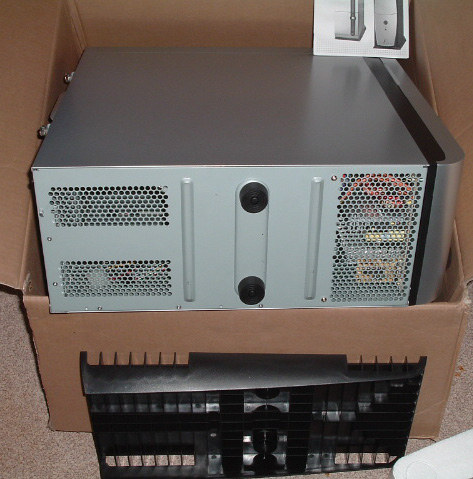 Standing the case upright, from the rear it's deceptive in that the exhaust fans briefly give the illusion a PSU is there, until you notice there are two side by side (although that might be an excellent idea for a PSU?). At the very bottom you can just make out the PSUs AC plug connector, this is because a modular extension inside the case is required. 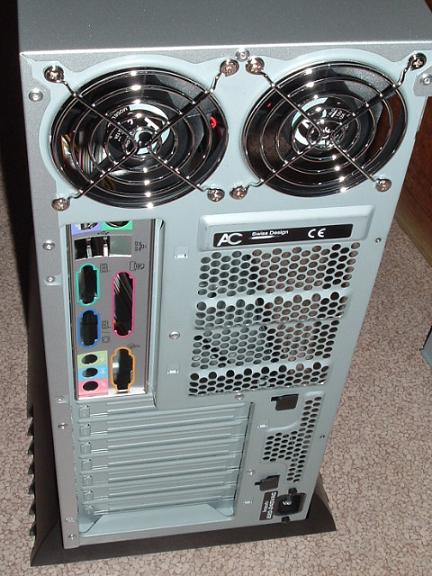 Looking at the case form a side-view we begin to get an overall perspective on the Silentium T2's design philosophy. I'd originally thought the case was aluminum, it does have an aluminum aura although think this is a result of the name sounding similar (good psycho-marketing). 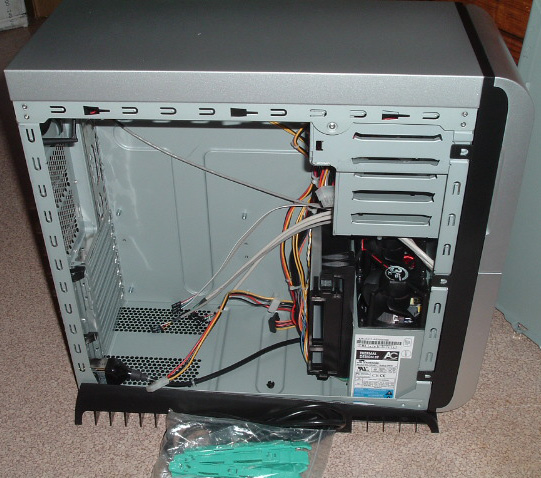 I've taken the front photo from an downward facing angle because we rarely stare Tower cases (most often placed on the floor) at eye level. If you want to see enhanced photo's of the case simply click on Silentium T-2. Aftyer reviewing many cases I've come to the conclusion they look very different from their web-site photos because we're almost always looking down at the case. Here at the [M] were keeping it real. 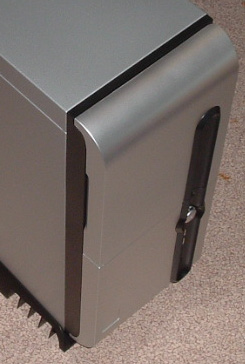 The T-2 is clean and sophisticated. A nicely designed door which blends perfectly with the front of the caase swings smoothly on sturdy double hinges. 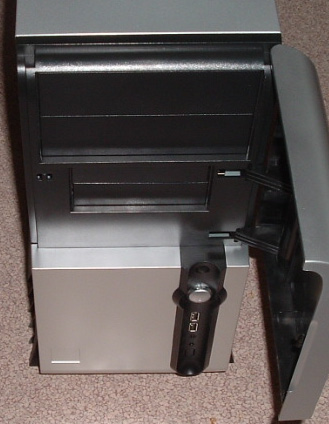 Delving into Silentium T2 innards we see the Seasonic PSU placed on the bottom adjacent to the HDD drive enclosure. Unfortunately the Silentium only accomodates one HDD drive in a specially designed enclosure given the moniker "HDD muffler."

While Arctic Cooling describes their reasoning behind this enclosure as an aid in cooling the HDD and to isolates its vibration the rest of the system; the thick aluminum shell may also protect the HDD from magnetic fields from the PSU. 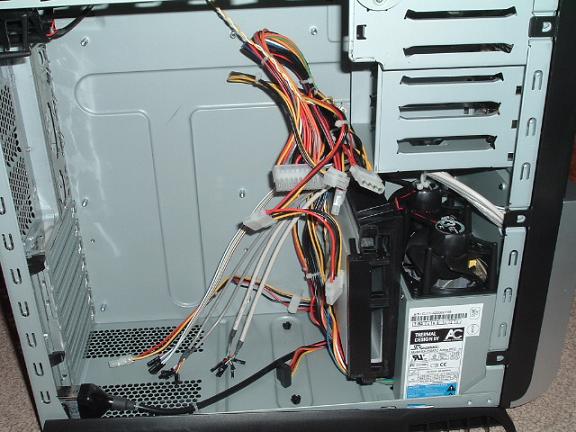 Let’s take a closer look at the “HDD muffler” ->