biCker takes a look at this all-in-one watercooling solution from Koolance. The PC2-C is tested here with an Athlon AMD 1.2ghz heating the water, will it boil? Find out in this review.

In the early computer days nobody made a fuss about his pc being loud or having trouble with rising temperatures when oc-ing. Well, you may have noticed that today a cpu needs decent cooling even on standard settings, which involves off course the use of at least two and preferably more fans. The more fans, the more noise and the lower temperatures get. So eventually a genius came up with an idea: hey, why not cool the cpu (and other heat developing parts) using water? And yes, watercooling was born! Today, we’re going to check out a product made by Koolance: the pc2-c case.

What does one get when buying this case? Off course the case itself, with the radiator positioned in the upper part of the case , reservoir and pump, the top cooling module with three fans (one for exhaust and two for intake) the led display and the power control board, a 200cc bottle with cooling fluid, a user manual and a lot of smaller components.

Normally the cpu cooler is not included in the package but at Loveno you can buy the case with a cpu100 waterblock for only €296. If you really see things big you can always order a bigger cpu cooler, a chipset cooling block and even a gpu cooling block!!

Since the koolance pc2-c is presented as a midi tower one cannot expect to house 15 drives inside but there is room for 3cd/cdrw or dvd drives, 3 hard disks and a floppy. So the average user won’t have any problem housing his or hers components. 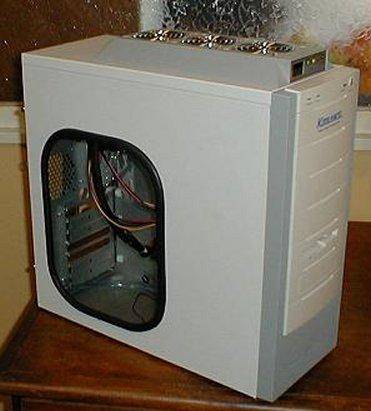 Let’s take a look at the case itself before we fire here up and see what she can do… The guys at Koolance certainly have an eye for detail; notice the thumbscrews witch make opening and closing the case just that little more easy and for frequent lan-visitors, you can even put a lock on your side panel to make sure that everything what’s in the case stays there! 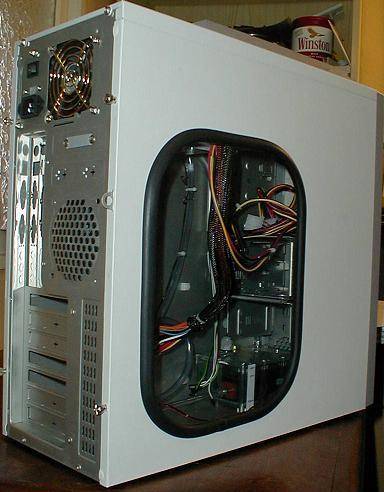 On top off the case you can see the temperature control panel: from the left to the right you see: the water temperature display, a power on led, the indicator led for “accelerated mode”, a selector knob for degrees Celsius or Fahrenheit and the fanspeed control knob

And last but not least the inside. Here you can see that some cutting skills are required as it is very difficult to close the case without cutting a power cable lane, and if you use a power supply with two fans you also need to cut the hole for the intake fan yourself. Nothing a little bit of a casemodder can’t accomplish though! 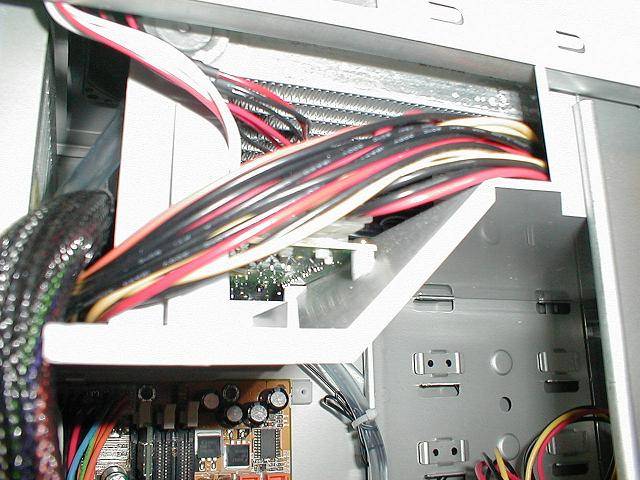 Since I received the case with the pump, waterblock etc already installed and filled there’s not much I can tell you about it but a quick look at the manual learned me filling the system is quite easy: on the bottom off the case is a filling plug, just open it, poor 100cc off the Koolance fluid in the reservoir, add distilled water, use the included bridge for the power supply so you get the pump running and purge the system and you’re set to go… So let’s hook the mobo and cpu up. Attaching the waterblock on the cpu is really easy, just apply thermal compound on the cpu, put the waterblock in position, install the clip on the socket and tighten the screw, thanks to the ingenious system crushing the core is virtually impossible. That’s all there is about… 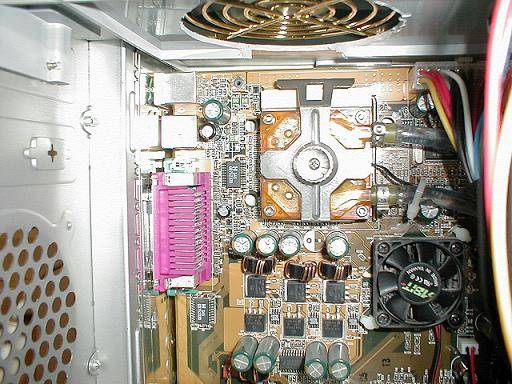