Danger Den continues to be an innovator in water cooling. Their NV-68 Rev. 1.1 GPU/memory water block is a massive H20 copper cooler designed specifically to tame the nVidia 6800 line of graphic cards. Incorporating both GPU and memory cooling this is bound to be an Overclocker?s dream. Madshrimps bolts this baby to a BFG 6800GT PCI-ex OC (370MHz core speed) and tests the NV-68 in linear as fed from a PolarFLO TT CPU-water block. In this respect we will also measure performance difference (if any) from single, then twin outlets (ports). You might need your thermal-undies and a dictionary for this one; so bundle up, hang on, read on.

If your located in the USA and have some PC-water cooling experience, your no doubt familiar with the name Danger Den. Based in Oregon, the company rose from a niche copper water block maker to one of the largest names in the business. Danger Den attracted their current market share incorporating cutting edge design, reliability and affordability. With the release of the triple barb RBX followed by the diminutive foot-print of the TDX Danger Den design's offer righteous performance value. Today we evaluate their NV-68 Rev 1.1, one of the earliest of a rapidly growing number of graphic card cooler's designed to cool both the GPU and memory on nVidia 6XXX series of graphic cards. 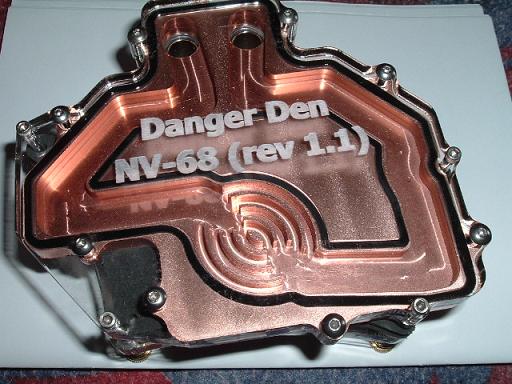 Perhaps the most critical aspect of any water block besides basic material (copper, silver, etc.) would be impingement and flow characteristics. Where multi-block systems are concerned the secondary block in-line such as GPU and chipset coolers are often designed differently from CPU water blocks. Many don't meet the criteria for an impingement zone per-se. The impingement zone is usually defined as the area within the water block sitting directly above the CPU-core and it's this surface the incoming water-stream will first "impinge." Ideally the impingement zone is where most of the processor's heat will be conducted. There are several basic designs for impingement zones and some work in conjunction with a specific Intel design. For example, Danger Den utilizes "accelerator nozzles" on their TDX water block, thereby fine-tuning the inlet water stream. Where multiple blocks are used in linear there's bound to be a drop in pressure as well as a rise in temperature from block to block. For these reasons many graphic card coolers are designed around minimizing flow restriction. The NV-68 seems to epitomize these characteristics with it's wide channels seen below. 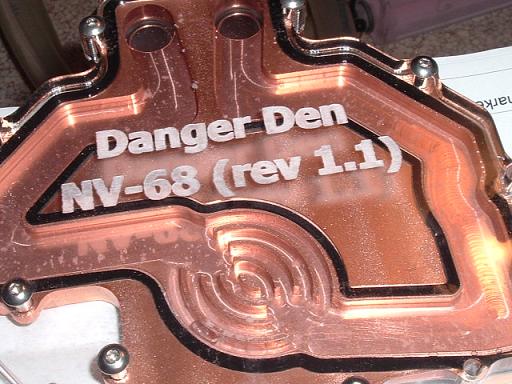 As seen in the photo above, Danger Den engineers machined a continuous channel originating from the inlet wrapping around the block over each pair of memory chips to the outlet. The area above GPU has a series of small curved channels which concentrate water-flow above the GPU creating an agglomerating effect for maximum heat absorption.

Below we see the NV-68's mounting system utilizes four spring-loaded bolts which slide through the water block, the graphic card, finally pass through a foam pad and Lucite plate. Copper hand-fasteners tighten down springs securing the entire assembly for an even distribution of mounting pressure. The system is simple and works very well. I was able to mount the NV-68 in matter of seconds and the most time consuming job was removing and re-applying the included thermal paste for Arctic Silver Ceramique. 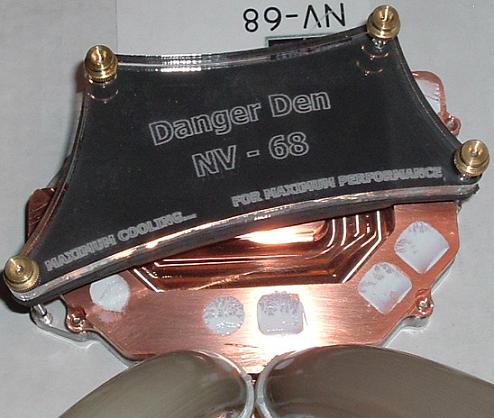 This card features 256MB of Samsung 2.0ns memory and based on NVIDIA’s NV45 GPU with HIS bridging chip the card features 16 fully active pipelines. BFG overclocks the GPU from NVIDIA’s default speed of 350MHz to 370MHz. To prepare the card I used Arctic Silver ArcticClean to remove any thermal paste and prep surfaces for Ceramique. This paste’s non-conductive properties are essential given the number of SMDs on the NV45. Removing the active cooler (fan assembly) reveals an aluminum heatsink and black aluminum heat-pipe memory sink to cool the BFG 6800GT's Samsung memory. Most 6800's now utilize heat-pipe technology. 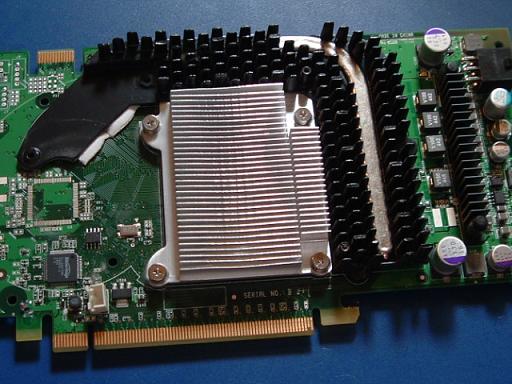 Disassembling the BFG 6800GT I came upon the realization this card may not be so easy to "tame" after all. Its heat signature is somewhat more involved then simply cooling a "single" GPU. In the photo below it's clear from the thermal paste "foot-print" on the underside of the GPU heatsink, there's not one, but two chips to cool. 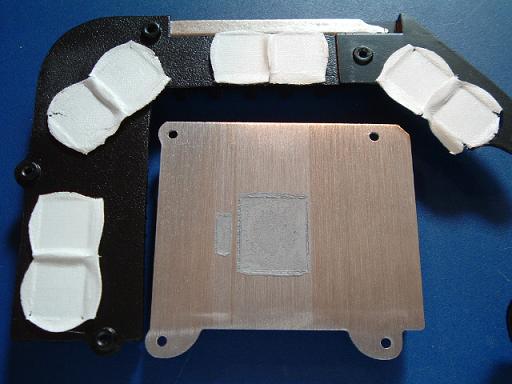 Native PCI-ex GPUs for 6800 series graphic cards have been absent from the market to date. This has left manufacturers with NVIDIA’s ad hoc solution in the form of a PCI-ex "bridging-chip" located just below the NV45 core (seen in the photo below after cleaning with ArcticClean). 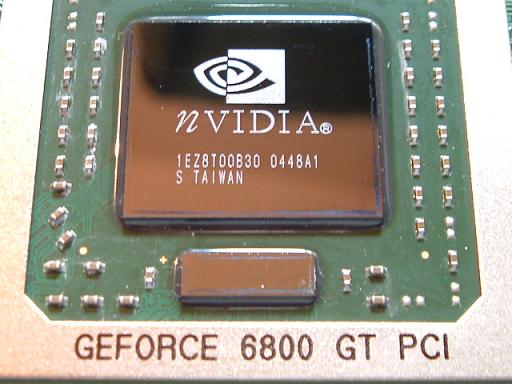 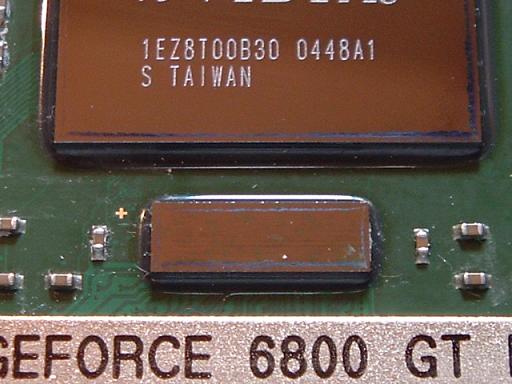 The NV45 is basically an NV40 with a PCIe bridging chip. The chip has no discernable marking's and it's generally agreed the HIS chip has no adverse effect's on performance. Given the fact PCI-ex 6800GT versions have this additional chip; we can safely assume they have their own heat signature as well. Reading through 6800GT reviews, technical articles and countless forum posts, I discovered many end-users whom had previously owned an AGP version 6800GT, then purchased the PCI-ex 6800GT version were seeing an approximate 10C rise in temp between the two. This piqued my interest for several reasons, foremost were my temps which I felt were quite high. I thought perhaps this was a result of the BFG 6800GT OC which is overclocked 20MHz by default to 370MHz core speed. I decided to "under-clock" the card running it at NVIDIA’s specified 350MHz core/1000MHz memory frequencies. On the left the BFG is running at the model’s OC frequency 370MHz/1000MHz, on the right the same card running at NVIDIA's stock 350MHz/1000Mhz frequencies.

I originally tested the NV-68 on the eVGA 6800GT AGP version mated with the Asus P4C800E-dlx and Prescott 3.0E. I used exactly the same components found in our proprietary H20 system for this review, as follows: Hydor L-45 pump (2800l/h 2.3m Head-ft), Danger Den double heater core (2x120mm/92CFM Sunons (pull)), and a Danger Den Bay reservoir, on 1/2" tubing. Below I’ve provided two thumbnails to screenshots comparing these cards running on the same dedicated system (proprietary) used in this review. On the left the NV68 cooling the eVGA on the Asus P4C800E-dlx/3.0E test system cited above. The system is running at default speeds (15x200FSB = 3.0GHz) the eVGA is overclocked from 350/1000MHz to 425/1151MHz IDLE. The right thumbnail shows the NV-68 cooling the BFG 6800GT OC for this review, same dedicated system at IDLE, however; the BFG is running at default speed for that card, 370/100MHz. Although the AGP based eVGA is overclocked, it's still running showing a 12C drop in temps compared to the BFG PCIe card with the additional bridging chip. While the theory may not be irrefutable the premises is valid, and the results were repeatable. The ambient temp was a few degrees lower during the eVGA test, however; it certainly wouldn't account for such a large discrepancy between temps.

Installing the NV-68 GPU/memory cooler wasn't difficult, however; I was somewhat concerned about the weight (leverage) acting upon the PCIe 16x slot. The NV-68 is undoubtedly the heaviest water block of any type I've ever used. Without a proper scale I cannot be sure, but I'd venture to guess this cooler weighs at least 500gr. 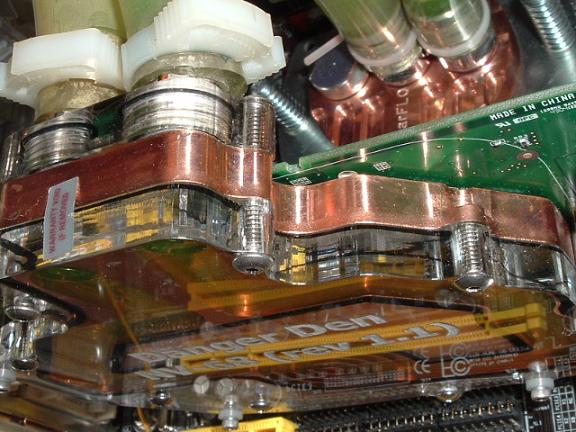 Visible in the background, our PolarFLO TT is feeding the NV-68 from a single port (outlet). Given the flow characteristics I alluded to earlier, we'll begin by determining if there is a difference in temps if the NV-68 is fed using the PolarFLO-TT's single or dual outlets.