Tired of those whining fans, want some peace and quiet when starting your PC? Read on to find out how you silence your system without turning it into a small oven.

It's all about the: case fans 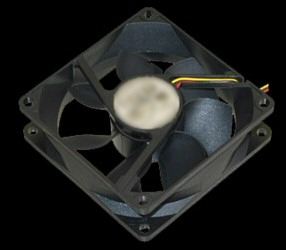 Case fans at half speed:

Let's start of with the easiest of manipulations: reducing the speed of the two case fans should silence the system a bit, without losing too much cooling power.

Each fan's rotation speed was cut in half using the Aerogate II fan controller:
(number between () is compared to default configuration)

Reducing the airflow inside you can see some changes; the hard drive benefits most from the front fan, without it the temperature rises 7°C , the other components only become a few degrees warmer. CPU actually becomes 1°C cooler, this is within the margin of error though, and it's quite possible that the two case fans were disrupting the airflow towards the CPU's fan.

Now let's see how the system does without any case fans running:
(number between () is compared to default configuration)

The noise doesn't decrease a lot when compared to the system running with the case fans running at half speed. The temperatures however increase quite a bit, closing in on +10°C for the HDD.


Conclusion: a fan controller should be near the top of your purchase list

Cost of the modification: $15-$70 depending on your needs. 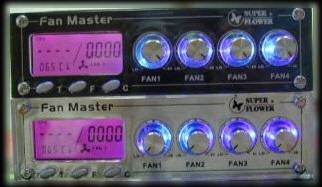 Adding a fan controller can help reduce the noise generated the system's case fans effectively without affecting temperature a lot. Even a little bit of airflow proves to be much better then none at all. You can go all out and buy a fan controller with all the bells and whistles (memory card readers, LCD display, and allow control through software in Windows) or stick with a more modest model which features a series of knobs which control the fan's speed.

Do it Yourself solutions :

1) Case exhaust is vital.
2)There are other heat generating components in a PC other than CPU and Graphic card we commonly talk about.
3) Good CPU cooling is only part of the equation.

Using sound meter is the best for sound evaluation; because some people just couldn't hear much of anything

Comment from BugMeNot @ 2005/03/12
You should probably have made a temperature target for each component.
Obviously a lower temp is always better (unless you are keeping your coffee warm on your case), but if the CPU can live forever at 70 degrees it wouldn't matter what temp you got as long as you didn't go over that max temp.
That said bearings would be the only thing that would be hard to nail down. I would suggest putting in a buffer temp into the bios to save the cpu.
The best thing would be to have a PSU that keeps running even when the mobo powers down.
Also, BTX should solve many cooling problems by using less fans.
Comment from Sidney @ 2005/03/12
Quote:
Let's "hope" so.

BTX is focusing on CPU cooling from front inlet via duct work. I have not seen HDD cooling solutions in BTX. CPU will only be made cooler not hotter would be the better solution.
Comment from Gamer @ 2005/03/12
good work there.
Comment from SuAside @ 2005/03/12
euhm

wtf is upwith the NSYNC pics? finally showing your true nature jmke? ^^
Comment from jmke @ 2005/03/12
actually I added it to please you