The successful Hyper 6 has sprouted a successor; today we take a closer look at the Hyper 48 from Coolermaster and see how it stacks up against the competition using a variety of fans.

When Coolermaster introduced their new high end heatsink last year in March it took the first spot in the performance ranking, the Hyper 6 featured 6 copper heat pipes which dissipated their heat into a series of fins placed in a tower configuration.

While the Hyper 6 boasted extreme performance, it also had extreme specifications, close to 1kg in weight and using a plastic bracket for installation, it was best not installed on your CPU when moving your case around.

The Hyper 48 from Coolermaster

Coolermaster went back to the drawing board and produced the Hyper 48, a multi-platform more compact heatsink, which uses a 92mm fan, furthering the move towards a silent cooling solution. Their new high performance heatsink comes with the necessary gear to install it on Intel's socket 478 and 775, and AMD's socket 754/939/940. The included fan is a new generation Delta fan which features good airflow at low noise levels. I found the same type on fan in mainstream PC's from Siemens which operate at low noise levels. 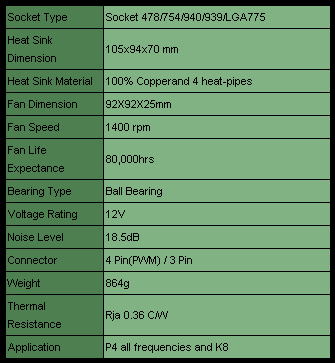 The heatsink is considerably smaller then the Hyper 6, however in the weight department it still surpasses Intel's maximum by quite a margin. The included fan is rated at 18.5dB but no information is provided at what distance this was measured.

It's all about the fan

I will be testing the Hyper 48 with 3 different 92mm fans and different voltages:

The Delta fan on the Hyper 48 has a rather unique design; the sides of the fan's bracket are removed:

Let's take a closer look at the copper Coolermaster heatsink ->