Today we?re evaluating an all in one water-cooling solution from Thermaltake, the Big Water 12cm internal H20 kit and see if it can tame a Prescott powered system.

If you've ever seen the movie Disclosure with Michael Douglas, and Demi Moore, Douglas play's a computer company engineer who meets an odd character on his daily commuter-fairy ride to Seattle. One morning Douglas is using a new cell phone his company developed which draws the attention of this acquaintance that was forcibly retired by IBM after 28 years. Upon seeing the size of the cell phone carried by Douglas he launches into a diatribe:

"Remember the first cell phones, the way you lugged them around like a suitcase? People were amazed, like showing a Polaroid to a Bushman. Today everything is smaller, better, cheaper, faster... They get a red-ass if it's bigger then a credit card. Did I ever tell you what they said to me at IBM after 28 years? That I was being surplused. If they wanted a euphemism, they should have used sodomized...smaller, better, cheaper, faster"


In the PC industry, smaller, better, cheaper, faster is a formula for success. The underlying philosophy is miniaturization, hence the term "micro-processor." Yet manufacturers are faced with a design conundrum. As the modern CPU die-size decreases, their transistor count increases. Fundamentally a transistor is a capacitance switch with no moving parts, holding a constant electrical charge. It's either on or off (binary), and with hundred's of millions of these charged switches in a semi-conductive medium (silicium), there's a propensity for current leakage. Although manufacturers have employed technologies such as SOI (.pdf) (Silicon On Insulator) the fact remains the modern CPU is heading towards a thermal exigency. In order to keep pace with the surmounting heat problem, heatsink manufacturers have had to adapt, increasing mass, and fin-count on their coolers. Today's copper heatsinks regularly weigh upwards of 630gr, and since a heatsink is often only as effective as its fan, some radical blowers have evolved. Fans have even taken on the appearance of Jet turbines. Unfortunately for that particular blower, at just 22CFM all it had in common with a turbine was aesthetics.

Thermaltake has been producing heatsink-fan combos for PC's since 1998. One of their earliest models the Orb sold over 2-million units and its unique shape influenced the way many HSF's were designed thereafter.

Their Volcano series evolved through 12-versions in under three years keeping pace with CPU changes and user needs. Innovations from Tt include one of the first HSF combos to employ a thermistor which adjusted fan-speed based on temperature change. Not without its problems early Volcano-7's suffered as a result of poor thermistor placement. Placing the thermistor up near the fan (seen below) gave artificial readings slowing fan RPMs. 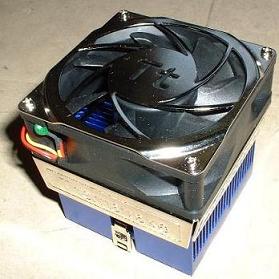 The issue was rectified in subsequent versions and it's this commitment to product improvement which keeps many PC-Enthusiast's loyal to Tt products. Most successful heatsinks have evolved in parallel with the often misunderstood thermal ramifications of Moores Law (originally an economic theory) covered in our transistor definition above. Heatsink makers have had to keep pace with this engineering trend and Thermaltake, at least, have done well to date. To exemplify how heatsinks have adapted over time, I've placed my original Thermaltake Volcano 6Cu+ side by side with their recently released Polo-735 (reviewed here). 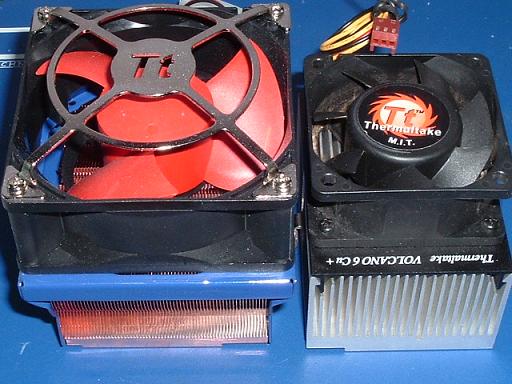 I'm sure many of you have seen the Tower Coolers of late resembling multi-storied Apartment Buildings with external plumbing (heat pipes). Most of these weigh over 700-grams including fans. Worse yet with their approximate 17cm height one must account for leverage exerted at the socket. The PC-industry rapidly approaches the inevitable: going beyond the 65nm die-shrink air cooling will be impractical.

If you've ever tried to install a tower-cooler as I have, you've probably asked the same question; "...Where will it end?" The PC industry's best answer; H20. Hydrogen, as the key element in water has some amazing bonding properties. H20's cost and wide-spread use in mechanical applications make it the ideal medium for cooling the modern microprocessor. These facts have not gone unnoticed by Tt who in 2002 delved into water cooling with the introduction of their Aquarius external H20 cooling system. Thermaltake's initial foray into water cooling left much to be desired, however; in Tt tradition they went right back to the drawing board. 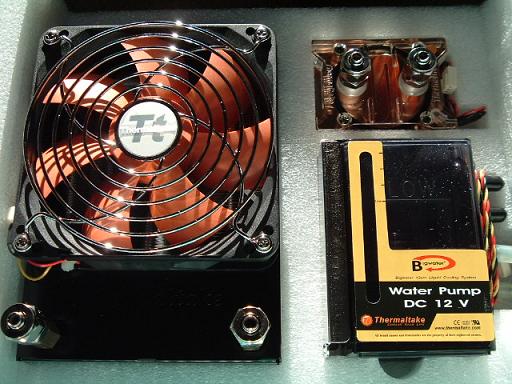 Today were evaluating the Big Water 12cm internal H20 system. While the Aquarius H20 cooler didn't fare so well, the company has been working to improve their designs. The new Big Water kit is specifically designed for internal installation, and more specifically with their line of aluminium tower cases has proven to be more effective. While I will be focusing on the case featured today in it's own review, Thermaltake's newest aluminium full tower, the Shark is designed specifically with Tt water cooling systems in mind. We'll also discover this case to be a key ingredient in Big Water's cooling recipe. Below we see the Shark case, with Big Water system installed inside (the small "reservoir" or filler bottle on the right can/should be removed). 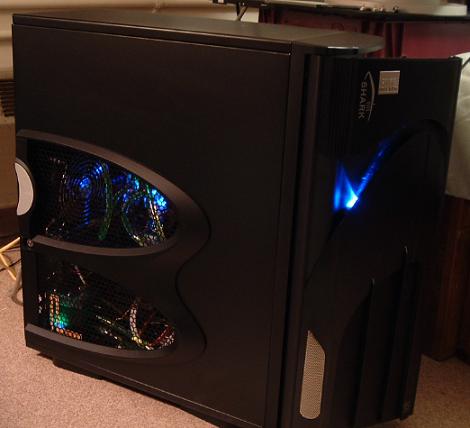 The photo above is a milestone for me as I've been an adamant defender of placing cooling apparatus outside the case. My reasons were that a closed case no matter how well ventilated, most often exhibited internal temps significantly higher then ambient room temp. In addition double fan heater-core's and AC powered Hydor pumps were difficult to pack into a case. Removing side panels and placing components on the floor (where temps are lowest), improved the performance of every system I've tried this with. Throwing open the window above my PC to the cold New England air resulted in temps on par with phase-change. As a Reviewer, however; such data is completely worthless to the average reader. My early h20 reviews were self-cantered, and only applied to hard-core PC-enthusiast's. This was most unfair. I've found a balance, and while testing all cases are buttoned up, and room temps are maintained at a minimum 60F/17°C (still chilly but not unacceptable). Here's what my setup used to look like. 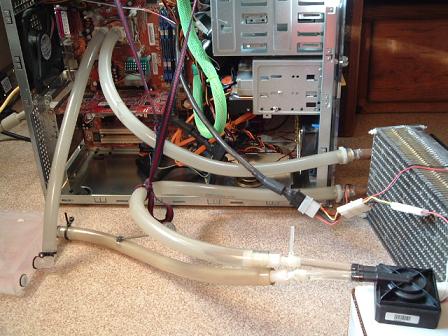 While the system above is obviously an ergonomic abomination, it was at one time, a utilitarian utopia for me. Beyond the prima facie temp advantages, for a Reviewer ease of access to components is a blessing. Where I once thought I was doing my readers a service, I had every wife of a PC-enthusiast irate with me, and more then a few house pets injured from fans on heater-core's lying all over the floor. Now with a wider selection of quality aluminium cases at affordable prices and a return to larger server-style cases, installing H20 system's internally is more sensible. With my discovery of some excellent H20 systems such as Alphacool internal installation has become practical without sacrificing performance. Even Danger Den whom at one time designed their block's around 1/2" ID tubing, and Hydor AC pumps have introduced smaller DC pumps such as their DDC-12V shown in the photo above. Thermaltake isn't as affected by USA design philosophy and this is evident in Big Water, which seems to exude; Smaller, better, cheaper, faster...