In part two of our roundup we compare 11 different P4 heatsinks made by Thermalright, Spire, Primecooler, Zalman, Evercool, Vantec and Titan. Using different fans at low and high speed we try to find the best bang for the buck, best performer and most silent HSF combo out there.

Welcome to the long overdue Part 2 of my P4 HSF roundup, this will be a to the point review, each heatsink will be evaluated on easiness of use and installation, compatibility with different platforms and of course its performance will be thoroughly tested.

My previous roundup from Q4/2004 can be found here.

This review is split into 2 parts; the first part describes each heatsink in detail with pictures, good/bad points and performance with different fans and settings. In the second part I’ve combined all results in 2 graphs sorted by cooling performance and noise/performance ratio.

I’m including some of the heatsinks from the previous roundup as I’ve moved the test setup to a more enclosed location, which leads to different results as less “fresh” air is provided to the heatsink, so higher temperatures can be seen. 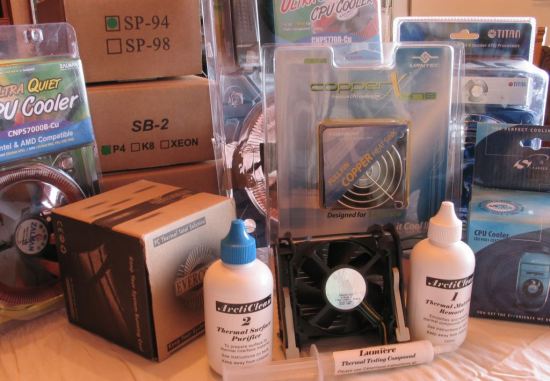