Not too long ago, the outlook on performance ram modules was looking a bit bleak. Now with the addition of some newer revisions of ram chips being implemented by OCZ and hopefully other companies as well, we are realizing the performance we once had and then some. Let?s find out how OCZ?s latest revisions perform on our Intel P4 and AMD A64 test platforms.

OCZ Technology has grown from a small independent producer of overclocking memory into quite a success story. Although OCZ Technology is still a relatively small entity, the quality of their product has become a substantial presence on the memory market. Early on, OCZ catered specifically to a few knowledgeable PC-Enthusiasts and avid overclockers. Just four years ago, there was a very limited number of overclockers, and even less products made for them. Today manufacturers such as Abit and Asus are designing platforms with the enthusiast in mind.

While the mid-level products pay the bills it's the high end which sells the technology. OCZ took another path to success. They designed for speed and performance, and never looked back. It was fairly late in the game OCZ decided to meet the demands of the average desktop user and server market. The trickle down effect has worked well for OCZ and even better for their clientele. In fact, OCZ Technology, is partly responsible for bringing the esoteric art of overclocking to the mainstream. When I'd first purchased their memory several years ago, that standard was almost a year from JEDEC adoption. OCZ now produces memory for just about any application, albeit Server, Workstation, Desktop, Budget, Gaming, and of course Overclocking.

Recently OCZ has further diversified, now building high-quality cost-effective PSU's, Memory Voltage Booster's, and Heatsink-fan combos. In fact my OCZ PowerStream-420, has been the central component in one of two reference systems. My primary system houses a PCPower&Cooling TurboCool 510 Deluxe. This is a testament to the quality of the OCZ unit. This review will cover OCZ Technology Gold PC3700 Rev.3 in 1024MB kit form and their Platinum Series EL3200 Rev.2 also in 1024MB kit form. 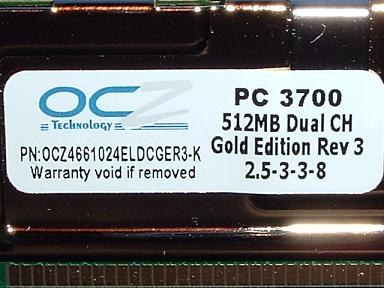 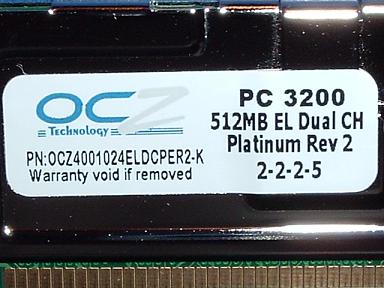 The review is divided into two parts; the first section covers tests on the Intel platform while part two features the popular Socket 939 platform.