FSP group brought 2 kits on the market containing PSU, HSF and a casefan. Can we expect any quality from this all-in-one soltuion? We?ll be testing and comparing both the S478 (Intel) as the S462 (AMD) so it?s time to power up those test setups!

To give you a better idea of how noisy each heatsink/fan combination was we ranked them according to this table. A bit too subjective for you? Fine, just skip it then. ;-)

Some pictures of the Socket 462 HSF... (click for bigger picture)

The performance of this cooler is good. Not only is it silent, but it also manages to keep temperatures at plausible levels.


Some pictures of the Socket 462 HSF... (click for bigger picture)

Here I got the same remarks as with the S462 cooler. Silent and cool ! The boxed cooler wasn't able to keep the overclocked CPU below shut down temperature, so that's why there's a "0" in the graph.

After some stressing on a powerful setup, MBM gave me following results: 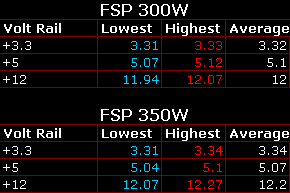 We can see that both the PSU's seem to have decent voltage rails. The 5 V rail manages to stay always above 5 V and within an acceptable margin (maximum difference of 0.06 volt). It's pretty much the same story the 12V rail. Fluctuations are again within plausible ranges and on both PSU's the average look good. The PSU testing is only short in this article. Why? Well, I included these PSU's in a bigger PSU roundup, which should be finished within a couple of days, so keep an eye out!

On to the conclusion ->>