Liquid3D takes a closer look at this fine TTGI offering, an aluminium fully featured case with an attractive pricetag.

The most important 6.5Kg aluminium "Heatsink" you'll ever own!: 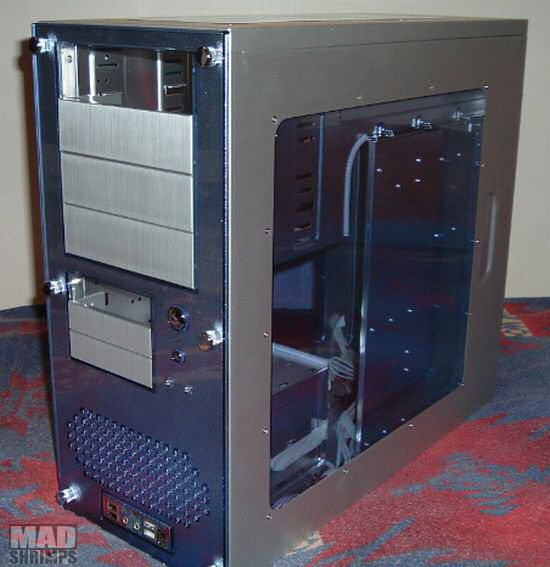 Some may find my description of a PC-case interesting to say the least. It took me several years to fully realize the impact on system performance it's immediate environment (case) has. As you begin to understand your PC's worst enemy, "heat" you begin to appreciate any device which aids in conducting heat away from the components. I won't delve into the drama supporting Mores Law, where CPU scaling exponentially increases heat per square centimetre on each consecutive model by its wattage increase. The analogy has the wattage burned per square centimetre approaching the heat of a nuclear reactor by 2005. Let’s just say microchips run very hot. Heat is an integral design consideration for chipmakers.

The modern CPU runs at between 32C to 42C if air cooled, lower if water-cooled. GPU's run at 42C, the North Bridge chip lower. Mosfetts, Hard Drives, CD Optical drives, Floppies, Soundcard's, your PSU, even the many feet of electrical wiring which run fan motors dissipates heat. Electricity is heat, and it flow's concurrently through every component in your system, 24/7 x 365 days, if you leave it on. Which by the by, is preferable to the stress of temperature extremes imposed on micro-devices from shutting the power on and off. There's no doubt about it, heat is the most commonly overlooked, albeit prima facie cause of system anomalies, and eventually failure. When heat builds it stagnates a device's performance potential, having detrimental long term ramifications. It's been proposed by engineer's, an overall temperature drop of just -10C, can effectively double the life of the average processor.


TTGI USA has been well aware of these facts for some time. They are the makers of the TT-550TS quadruple fan, aluminium PSU, coveted by many Enthusiasts’. Recently reviewed here, and at Lost Circuit's by yours truly. Since I've had the TT-550TS in my system, I've experienced not a single power related anomaly (spike, dip, or re-boot). The rails remain steadfast, just slightly over their perspective voltages. For the price there is no finer PSU on the market then TTGI, or Super Flower as they are known in the East.

TTGI pioneered the aluminium, quadruple-fan PSU, paying close attention to detail and maintaining the highest manufacturing standards, all at an affordable price. This same philosophy, intricate detail, and exceptional build-quality, reaches a pinnacle in their TT-201T3 case.