Many years ago, computer cases were simple, heavy, beige monsters. But since a couple of years, case manufacturers give more attention to the design. Although we will probably pay for the extra costs, many of us will buy a case that looks sw33ter then all the other cases… don't hesitate to read this review of the beautiful Chieftec DA-01BD

Many years ago, computer cases were simple, heavy, beige monsters. But since a couple of years, case manufacturers give more attention to the design. Although we'll probably pay for the extra costs, many of us will buy a case that looks sw33ter then all the other cases… So, let us start with the review of the beautiful Chieftec DA-01BD.
To make the pro and contra's more clear, I'll compare it now and then with the widely spread Aopen HQ08.
The two cases in this review came from our local sponsor Comtechnology, thanks go out to them! 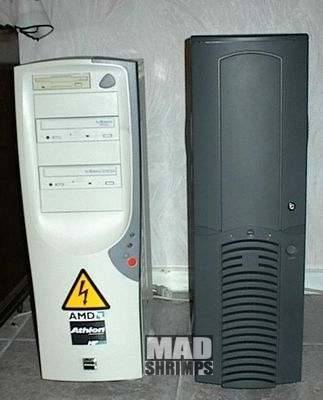 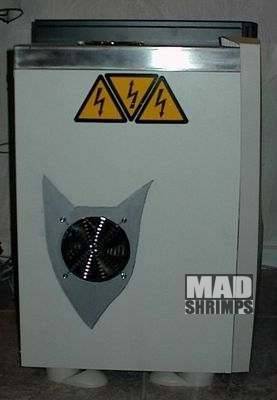 the to cases compared head to head, the chieftec is remarkably bigger.

First of all, when I lifted the box, I noticed it was heavier then the HQ08 box which I had bought a couple of months ago. This can mean 3 things:
1) The Chieftec case is heavier
2) I should start eating bacon and eggs again
3) Combination of 1 & 2
Anyway, I quickly opened the box and: "WOW!" (= first impression)
I couldn't wait to open the case, thinking about the "screw less design" I heard about. (Instead of regular screws, thumbscrews are used). Well, I was disappointed here, since there were no thumbscrews and I still had to use my screwdriver. So I started getting those screws out of the back, to open the side panel of the case. After unscrewing the 2 screws, I only had to pull the latch and the side panel clicked open. Much better then the Aopen-way, but still, I want thumbscrews! 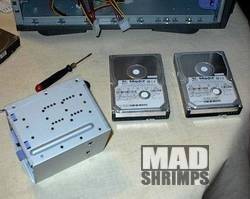 After that, I start studying the inside of the case, and the first thing I noticed were the smooth edges. You won't cut your fingers on these plates. Everything is very firmly put together. In a short: very very nice! Second thing I noticed where the very handy removable hard disk-racks. Extremely handy if you ask me! Chieftec also includes 5 80mm fan holders (3 normal and 2 for the 2 hard disk-racks, cooling your disks!). One thing should be clear by now: the Chieftec people really did their work thoroughly.