We go for silent! The average AMD setup still sounds like a jet taking off. Swiftech, Thermalright and other heatsink manufacturers are trying their best to provide us with a silent solution to cool these hot potatoes. Do they succeed? And which one does it best?

For our second test with all the heatsink together I chose an older CPU: 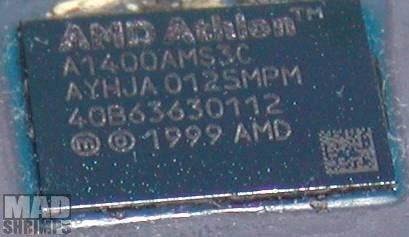 This CPU produces 72Watt at default speeds and voltage, very close to the current top crop of Socket A CPU's. But when pushed to a speed of 1533 MHz with 1.9v vcore it comes close to producing 100Watt! Cooling this down with air-cooling is always a challenge.

Here are the full specifications of our test setup:

We chose to divide the results up into 2 groups as shown below; the high end heatsink will be tested with the CPU putting out 92Watt of heat, while the budget-friendly heatsinks were tested at the default CPU speed (72Watt).