"OCZ Performance Series PC-4200 Dual Channel memory using state of the art HyperSpeed? technology is capable of achieving outrageous speeds of up to 533 MHz at CL 3-4-4-8. OCZ PC-4200 Performance Series Dual Channel memory has been designed and fully optimized for use on Intel i865/i875 chipset-based systems." Liquid3D puts this statement to the test.. and then some! 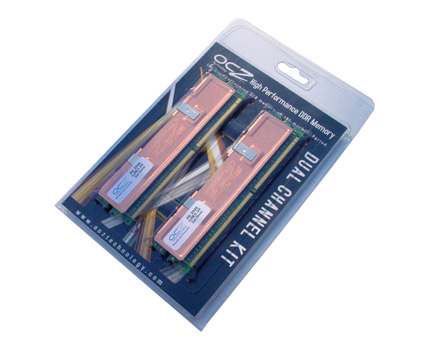 OCZ Technology has been finding some very inventive ways to extrapolate every possible MHz from modern DDR IC's. They have done it once again with their Premier series PC4200. Dressed in an attractive black heat spreader, with gold clips, it's much lighter then their GolD series, and to be honest I prefer it over the much heavier, and may I say heavy "Gold" series. The jet-black light-weight aluminium heat spreader simply exudes "fast," and "cool." First off let me say I've been running this memory for almost a week now at 280FSB with absolutely no stability problems. I originally ran it on my Abit IS7-E, and the gists of the becnhmarks were run on the venerable Asus P4C800E Deluxe using a 1GB-kit. I have not removed the heat spreaders to verify the IC's, and believe them to be Hynix, although I haven't empirically verified this. Suffice it to say, if they were Samsung TCB3 DDR333, then I shave my head, in honour of Belt sanding, C02 lasers, or pixie dust. Given the fact there are no Fab's actually designing, and building 4.0ns IC's, the first stage is the binning, and that in itself will only get you so far. I do know where OCZ has made significant strides is in their researching different PCB's. And at these speeds given the jump-off point (silicon limitations) choosing the correct PCB has just as large of an impact on performance as the IC's themselves.

I don't remove heat-spreaders all that often. Unless there's some compelling mystery to warrant it I see no reason to. In fact I was slightly suspicious when Lost Circuits decided to "unveil" the "hidden" secret under OCZ's GolD3700 Heat Spreaders some time ago. In fact I found it to be in poor taste to suggest OCZ was claiming there was actual "gold" in their Heat Spreaders. I've come to respect Lost Circuits for their in-depth, most often educational articles. Yet I must say their removing one heat spreader, on one particular memory brand, of all the memory they've reviewed over time seemed somewhat nefarious. So long as the module does what it supposed to do, why bother? If OCZ was specifying 3.10VDIMM as the default required voltage, I'd most likely become suspicious. None the less, Anand Shimpi countered in his article on the Gold3700 and coming from Anandtech, that's a powerful endorsement. When Lost Circuit's attempted to discredit OCZ with the words, "belt sander" line drawn through it, I found that to be personal. As they say, "that's all IC's under the heat spreader..." Speaking of Anandtech, they published their review on OCZ's GolD series 4200EL just recently. I like to run memory for at least a week, to allow the silicon to under-go, what some may label as "burn-in."

This article will not only be a review, it will discuss the discrepancies found from the label on your DDR, to the chipset claims of bandwidth. As Overclocker's (Enthusiast's), we can be an overly demanding and fickle bunch. We are insatiable when it comes to hardware performance, and whether it be DDR, Graphic's, or CPU's, we plug them in and immediately begin seeking the performance ceiling. Yet when we overclock our memory, we overclock the FSB, ergo the Processor. While we can use memory dividers, any experienced Enthusiast knows, this is simply slowing the system, and even with the best latencies, the divider defeats that purpose. This is especially true so long as were discussing the Canterwood/Springdale chipsets, for which OCZ Technology PC4200 was generally designed. At present the i875 MCH is the best "peak bandwidth" chipset available on the market.