We test a PCI SATA controller from ACRyan. Allowing you to connect 2 SATA hard drives to any system that has a free PCI slot. Does it perform better or worse then an onboard solution? We installed it and let you know.

Today we take a look at the latest offering from ACRyan. They decided to reach out to the hardware enthusiasts out there and release a PCI SATA Controller.
Their offering is powered by a Silicon Image Chip which goes by the model number of 3112. This particular chip supports 2 SATA hard drives.

But the fun doesn't stop there; ACRyan has added an extra SATA connector at the back of the PCI card, meaning that you can hook up your hard drive without having to open your PC Case.
The second addition which sets this card apart from the rest is the possibility to connect 2 of your older hard drives to this PCI Hard disk controller (if you use the PATA connector you’ll lose one SATA) 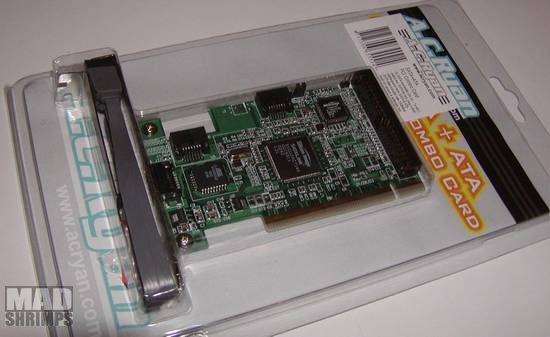