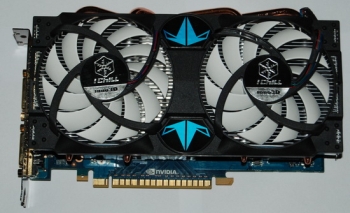 At first I would like to thank InnoVISION for making this review possible.

“ InnoVISION Multimedia Limited is a pioneering developer and manufacturer of a diverse range of cutting-edge multimedia PC hardware products established in 1998 Hong Kong. Our manufacturing operations have been set up since 1990 in Shenzhen, China. In this short period of time we focus on manufacturing OEM/ODM products as well as contracting out extensive production and research facilities to specialist companies. We have accomplished international recognition by PC’s top reviewers as becoming an outstanding success and one of the most fast growing companies in Asia.

Our company's objective is to deliver the ultimate multimedia experience to the masses of PC users and multimedia professionals at an affordable cost. InnoVISION was then created to build brand awareness for the continuously growing product range in order to meet the fast growing market.

InnoVISION's ISO9001:2000 certification assures not only a world-class standard of product but also production, management and distribution efficiency. The company's talented and dedicated R&D teams both in Hong Kong and Shenzen are continually carrying out research of the highest level to design the next generation of groundbreaking products.

InnoVISION boasted a significant rate and increase in the market share of graphics card sales over the past years. To maintain InnoVISION highly respected image we will continuously focus to achieve a competitive advantage by maintaining constant product quality by continuous research and advance technical support to target customer needs.

InnoVISION will constantly grow and develop for future innovation of new and existing products. We are determined to reach beyond limits and stay focused on our company’s objectives for future prospects.”

Expand your games across three displays in full stereoscopic 3D for the ultimate “inside the game” experience with the power of NVIDIA 3D Vision and SLI technologies. NVIDIA® Surround™ also supports triple screen gaming with non-stereo displays.

By tracing the path of light through a 3D scene, ray tracing uses the power of the GPU to create spectacular, photo-realistic visuals. Get a glimpse into the future of gaming with ray tracing.

Industry leading 2-way NVIDIA SLI technology offers amazing performance scaling which allows you to upscale performance by pairing your GTS 450 card with another GTS 450 of any other brand.

CUDA technology unlocks the power of the GPU’s processor cores to accelerate the most demanding tasks such as video transcoding, physics simulation, ray tracing, and more, delivering incredible performance improvements over traditional CPUs.

Designed for the new PCI Express 2.0 bus architecture offering the highest data transfer speeds for the most bandwidth-hungry games and 3D applications, while maintaining backwards compatibility with existing PCI Express motherboards for the broadest support.

Able to drive industry’s largest and highest resolution flat-panel displays up to 2560x1600 and with support for High-bandwidth Digital Content Protection (HDCP).

Nvidia has finally launched a mid-range video card, also with the modular Fermi architecture, named GTS 450. They have tried to release something in the mid-range segment in the past too, the GTX 465, based on the GF100 chip, but people lost interest in it fast because of its relatively low price/performance ratio; this chip also consumes a lot of power and dissipates a lot of heat.

The GPU codename for the GTS 450 is GF106 and it is basically pointed towards the mid-range solutions from AMD, the RADEON HD 5750 and 5770. Thanks to its reduced core size, we can expect from this card to draw less power compared to the other Fermi cards, but also to dissipate less heat. Compared to the GTS 460, we can observe that the memory bus was shrinked too, from 256-bit to 128-bit; this reduced available memory bandwidth to half.

The GTS 450 does have 192 shader processors which are found over 4 Streaming Multiprocessors. The reference clock of the GTS 450 is 783MHz, but manufacturers have decided to go beyond the reference specifications and we can find chips clocked at 810MHz (Zotac, Gigabyte), 820MHz (InnoVISION) or even 925Mhz (ASUS). 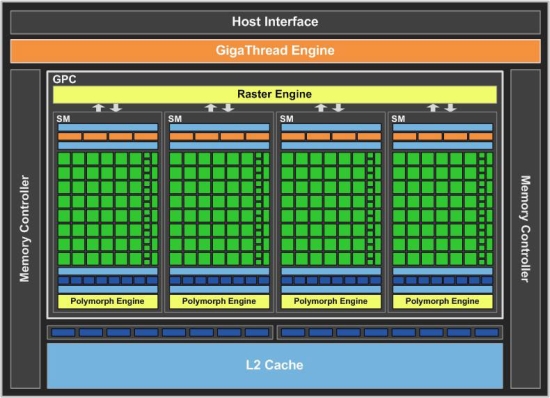 In Polymorph Engines that we can see in the diagram we can see the five stages:

These stages process the information from each Streaming Multiprocessor they are associated with. The data will then get to the Raster Engine which has 3-pipeline stages that pass data from current to the next.

In conclusion, we can find a total of 4 Polymorph Engines and 1 Raster Engine.