The launch of AMD´s hexacore Thuban CPU was combined with their new 890FX chipset. The old RAM wall was history. All over the net we saw screenshots of benchmark-stable rigs with ram speeds way over what was imaginable a few weeks before... Let us pop in Gskill´s latest AMD X6 compatible high speed ram: the 4Gb Flare 2000 CL7 kit. Can these do better than our Corsair Hyper GTX2 kit ?

Even though I had zero luck during the 1090 Thuban review to get the ramspeed stable at +2000mhz, I was pretty confident that the elaborate work between G.skill and Asus, would pay off. Most pre Thuban CPU's top at 1900ish ram level. Combining the strengths of the latest 890 chipset with a hexacore monster had obliterated this "so called hardware wall" on several forums on the net.

What I tested are the most common ram speeds used : namely 1600 and 1800Mhz. To top it off some runs at the rated 2000mhz speed of this particular G.skills Flare kit. Let's have a brief look at the Test setup specs :

3 Synthetic (Superpi 32M, Everest Bandwith and X264HD Video encoding ) and 2 Game benchmarks (Resident Evil 5 and Far Cry 2) should give us a good indication how performance scales with 1) increased total ram speed, 2) Tighter timings and 3) a combo of the previous.

All tests were repeated 3 times (each time after a fresh reboot) and the average results were calculated.

When comparing results there were slight differences in overal CPU speed and NB speed to. A small chart on the used HT clocks, multipliers and NB speeds.

As you directly see there's a small advantage NB wise for the 1600mhz setting. The 1800Mhz has got the better overall CPU clockspeed, though a lower NB speed. It's a small discrepancy you have to keep in mind when comparing the results.

Let's start off with Superpi 32M : 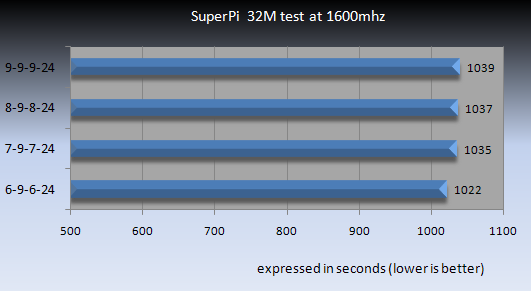 Not surprising that the tighter setup is overall fastest. Nibbling off a solid 17 seconds from the loose Cas 9-9-9-24 setup. Differences between Cas 7-8 and 9 are negligible. Now let's bum up the ram speed and see how the story turns out. 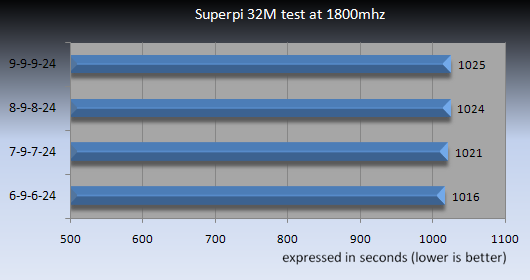 With the increased ram speed, even the slowest C9 test environment is almost as fast as the 1600C6 runs. Also the gap between the tight Cas 6 and the ultra-loose Cas 9 is far less then when tested at 1600mhz. Early conclusion is to run the ram at 1800mhz as the importance of the timings is reduced.

If you assumed that 2000mhz would go faster, you will be in for a surprise. The Asus 890 series are to my knowledge the only boards that can do 2000 and beyond out of the box. Though apparently this at the sacrifice of efficiency. The extra 200mhz ram speed isn't faster than the 1800mhz run at similar timings. Okay there are minor differences between the 3 test setup. Though 50mhz more or less on the NB speed shouldn't harm results. Let's see in Everest where the performance hit comes from. 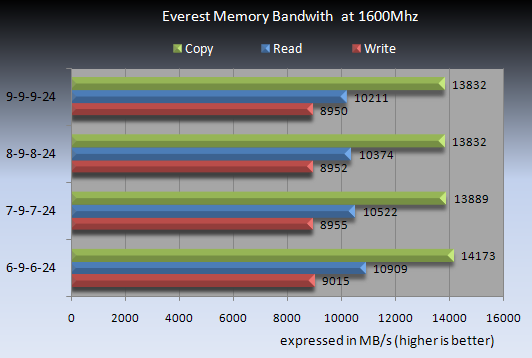 I think the above graph doesn't need many words. It clearly shows at 1600mhz ; the tighter the timings, the better the performance. 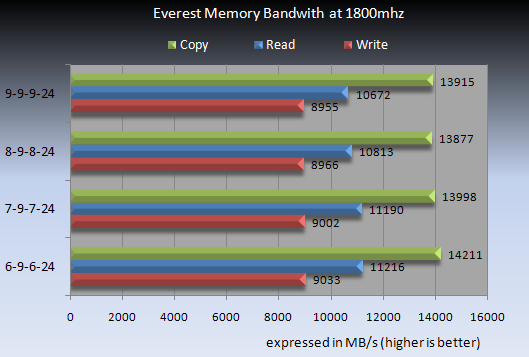 The 1800mhz runs seem basic too. Yet we see that the extra 200mhz only gives a small boost in Copy and Read numbers. The Read test with the Cas7 and 8 runs are especially performant over the 1600 rated results. 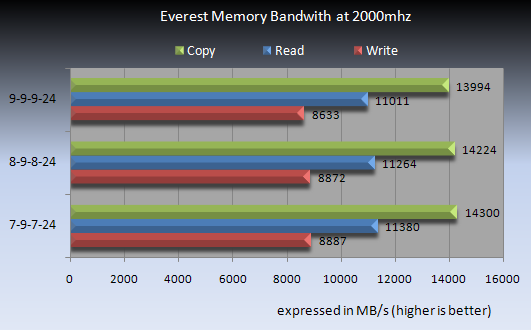 Bumping ram speed to 2000mhz clearly indicates the drop in performance in the Write department. Copy and Read still increase, though the gain over the 1800mhz isn't as impressive as when comparing 1600 vs 1800.

With the X264 HD encoding test I wanted to see if this synthetic gain would pay off in a sort of real world application scenario. 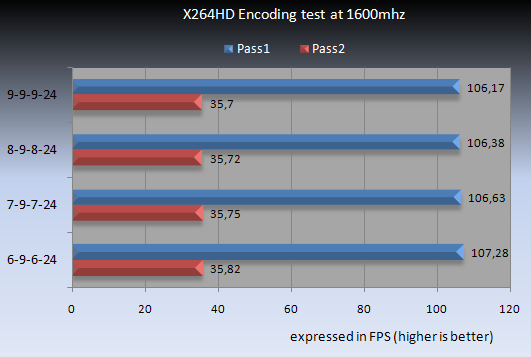 No surprises here as there's a small gain in encoding performance with the tight timings. It isn't much, but when encoding every time decrease counts. 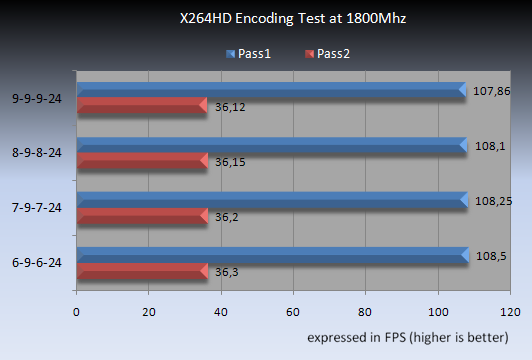 The 1800mhz test runs show a healthy boost over the fastest 1600 setup. The extra bandwidth created by running the rams an extra 200mhz faster even allows the loosest timings to beat the Cas6 1600mhz test. 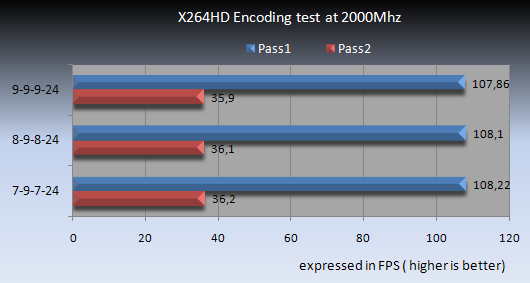 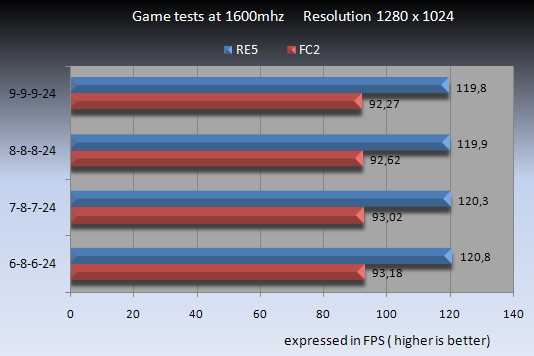 When conducting the different timing tests we noticed very little gain in the above two games. A mere 1fps gain going from Cas 9 to Cas 6 is negligible. Both games produce quite high numbers. Maybe in lower FPS games it could be the difference between just smooth or choppy. 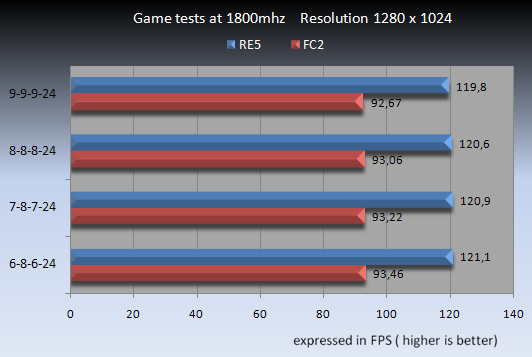 Moving onto 1800mhz : Differences are as meaningless as with the 1600mhz runs. In fact the gain over the previous ram speed is negligible. 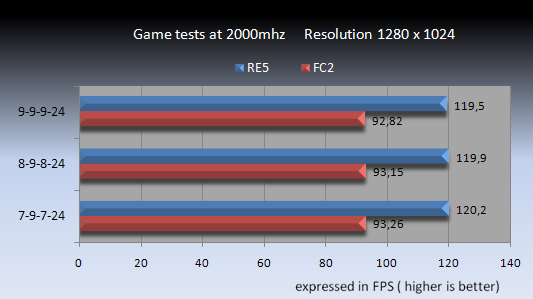 The 2000mhz results are comparable to the X264HD tests; A tad slower than the 1600 and 1800Mhz runs. If Asus could get the efficiency up to the estimated standards, it would be another picture.

Conclusive thoughts on these performance results

Quickly overlooking all the above graphs, it is clear that the sweet spot for AMD is still at the 1800Mhz mark. Running Cas 8 would yield similar results as 1600 Cas 6. Of course Cas 6 is overall fastest, but the gains from the previously mentioned Cas 8 are more for bragging rights. This Powerchip behavior really surprised me. A bencher will laugh my findings away, as every little extra counts. Though for a daily setup it would be nice to get 1800mhz ram action going for optimal performance. The timings at Cas 8 give nicely balanced performance for the buck.

Next up, Corsair Dominator TX2 “Hyper” vs G.Skill Flare ->

One more negative point though. Availability.
G.Skill site quotes a couple of shops in Belgium and the Netherlands.
But that info seems very outdated. So basically no go in those 2 countries.
G.SKill rep gave me 2 shops in France and one in Germany which have em.

I'll definately order one of these kits next month. This months budget has already been blown