The RADEON HD 5830 comes to fill in the gap between the best-buy 5770 and the 5850; it features dual 6-pin PCI-Express power connectors and has about the same performance as the 4890 in DirectX 10 games. The XFX model comes with a custom made heatsink that sports 5 heatpipes, meant to cool the card better than the stock solution.

The RADEON 5830 from AMD was designed to fill in the gap between the 5770 and the 5850, having the same features of the more powerful cards.

RADEON HD 5830 does come with the Cypress LE code name, “Cypress” being the code name for the high end series of AMD’s 5*** generation.

Here is a RADEON HD 5870 Block Diagram which shows the disabled parts on the 5830: 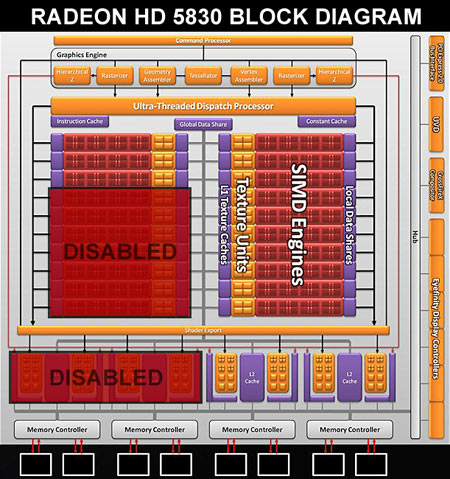 Some people would ask if it is possible to re-enable those missing shader processors; well, unfortunately it is not because they are laser cut. AMD has decided to disable these processors as a process of eliminating wafer errors: the portions of the chip that seemed defective in the initial factory tests were physically disconnected. In the distant past, some ATI cards that were considered to have chip defects had portions disabled with the help of the BIOS and people could re-enable them by a simple BIOS flash or with the help of Rivatuner; sometimes, enabling those parts would get you a much better board performance, but some people were unlucky, meaning that those disabled parts were indeed defective and started to get artefacts.