We show you what you can expect performance-wise on today?s hardware. And starting from 15 September @ 15:00 GMT we will provide you with a local download link!

One of the serious problems in handling huge outdoor scenes in real-time 3D games is the detection
of the potential visibility set of objects to be rendered (referred to as PVS). To extract the PVS it is
necessary to test if an object is being occluded by other objects. For indoor scenarios with a welldefined
geometry and short view ranges, this problem has been partly solved by algorithms like BSP
rendering or portal techniques. Unfortunately, these solutions don’t apply well to outdoor scenarios
(especially dynamic ones). The krassTM engine solves this problem for the occlusion between objects
and terrain, which is the most important portion of the problem. Think of an entire city consisting of
hundreds of individual buildings for instance: If that city is occluded by a hill, no object needs to be
rendered. AquaMark3 solves this problem by implementing a software rasterization process of the
terrain geometry into a depth buffer. Before an object is rendered a conservative estimation of its
bounding shape is transformed and tested for full occlusion. Because this task is purely CPU driven
and no data is shared with relevant simulation data, it fits well to a multi-threading concept.

Before the rendering starts, every object is checked for its visibility with respect to the terrain. This
query decreases the total amount of objects to be rendered significantly (~20% - 90%) and so leads to
less load on the graphics hardware. 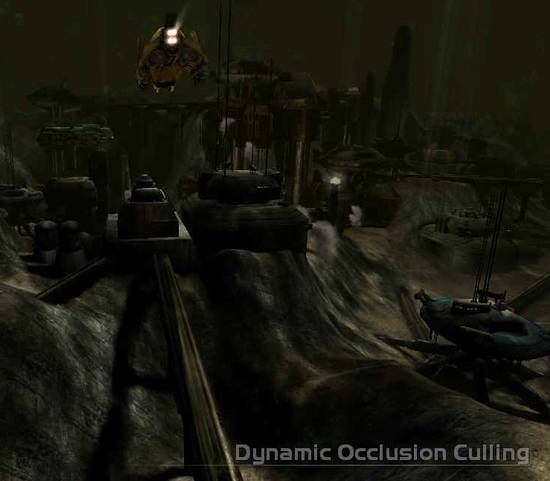 In games particles are a common technique for volumetric effects with high visual quality yet
efficient algorithmic computation. This chapter demonstrates a high number of particles being used for simulating dust and smoke. Other applications include explosions and weapon effects. In AquaMark3 each particle is approximated by a mass point with one degree of freedom for its rotation. 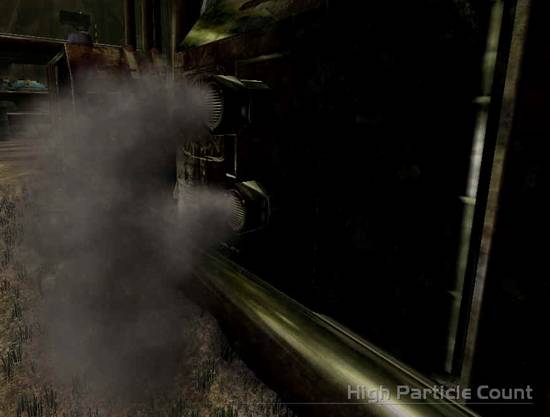 This chapter deals with the use of partial environment mapping on objects with highly specular
materials. The environment map is modulated with a transparency map to determine the relationship
of the incoming light contribution with the diffuse material computation. 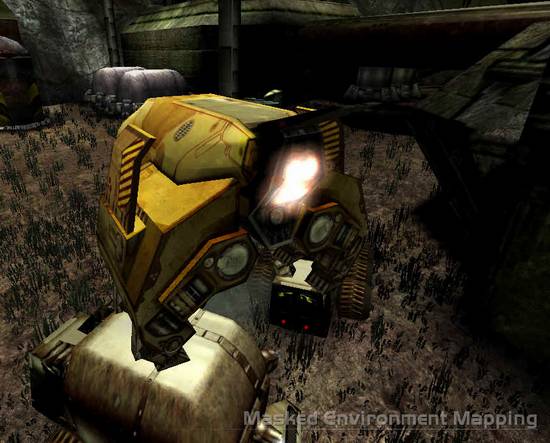 To enrich the lifeless atmosphere of the sea bed the terrain system can be combined with a highly
efficient animated plant rendering system that can generate a large number of similar, but colored and
dynamically lit plants. Systems of this type become more and more popular, because they can be
seen as a Level of Detail concept for simulated artifacts e.g. the plants in our case. In AquaMark3 this
system is designed to fill the gap between rigid and animated objects. Each plant is animated
individually and the animation supports the recognition of huge waves rolling over the sea floor.
AquaMark3 nearly puts the total computational load onto the graphics hardware by utilizing a concept
which we call “Hardware Driven Geometry Instancing”. Therefore the only task of the CPU is to deliver a plant’s size, position, rotation and color. This concept enables processing a huge amount of geometry on the graphics hardware. In this chapter, the number of polygons per second goes up to 25 million depending on the graphics hardware and the CPU, and so reaches the highest polygon throughput in the entire benchmark. 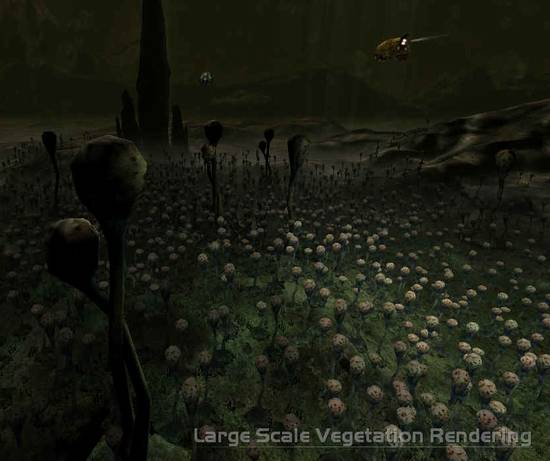 The AquaMark3 terrain system enables scenes with large viewing distances while still having complex surface materials with several detail and light textures. The AquaMark3 terrain database is represented by a discrete height map defined on a rectangular grid that covers the entire game world.

The height data taken from satellite surface scans has been adapted manually to fulfil our requirements: it can be used to build the level structure and its tile can be repeated unlimited times in each direction without cracks. 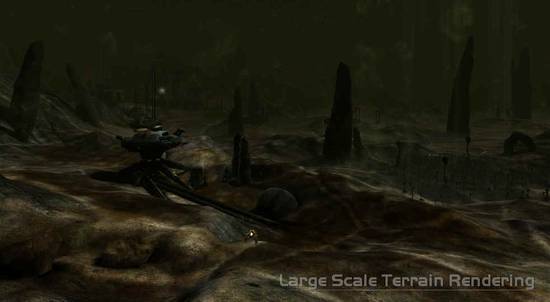 The objects in this scene show a broad range of different material and lighting effects used in
modern game engines. AM3 tests two things: It applies many vertex and pixel shader changes straining the graphics hardware and its many texture lookups (determining the lighting contribution and material reflectivity) also strain the texturing and rasterization components. 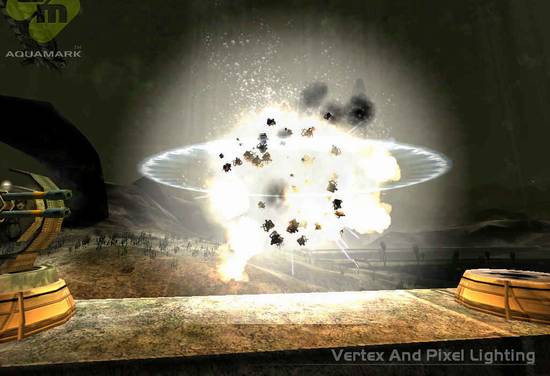 AquaMark3 supports a 3D volumetric fog system providing a 2D texture for every object in the
scene to be rendered. This texture should also be software-based to deal with visibility queries coming from ray casting systems which determine if an object can be “seen” through the fog from arbitrary viewpoints. 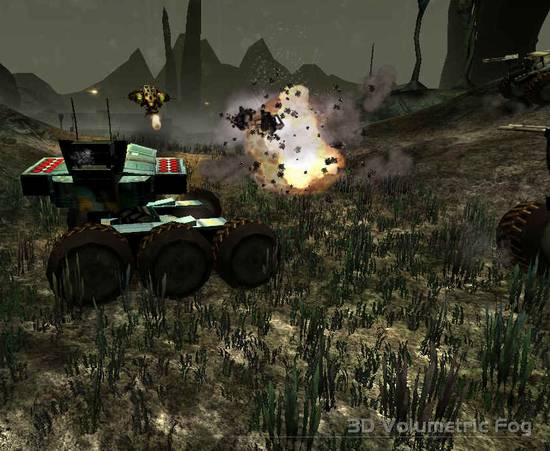 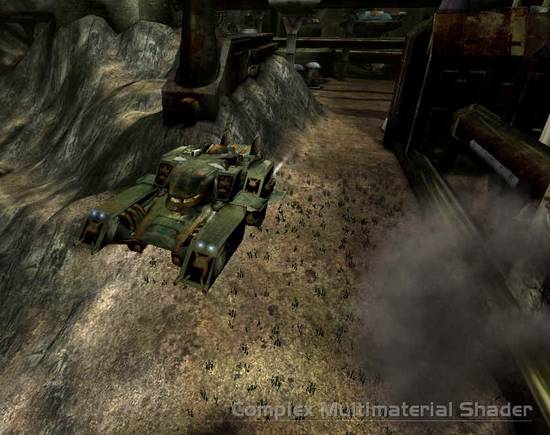 This scene demonstrates the application of the particle system for large explosions. For each
particle a textured rectangle is drawn that gets blended over the previous frame buffer contents. The test stresses the graphics hardware by the high overdraw of textured areas as many particles overlap each other. To ensure correct screen results, the entire particle set is sorted in back to front order for each frame with respect to the viewer’s position. 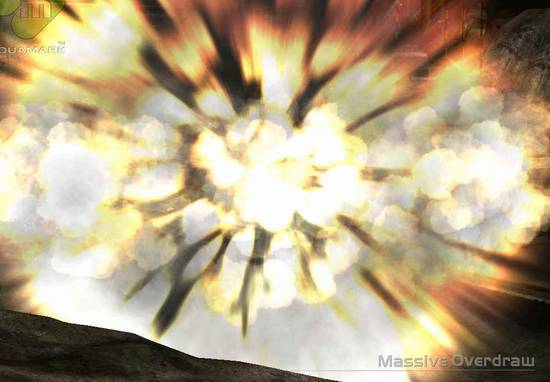