Walton Chaintech are now selling a product both unique and interesting, that is thought to replace the more expensive 2.5inch SSDs on the market. The device looks like a SSD, but inside it hides two removable CompactFlash cards, that can function in both RAID1 and NRAID modes, depending on what we need more: data reliability or more capacity. 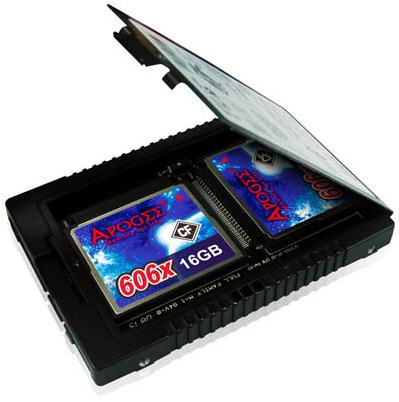 At first I want to thank Walton Chaintech for providing me their Apogee SSD Convertor (RAIDON SF2020-2F-S1 SSD enclosure) along with two APOGEE CompactFlash Cards 606x 16GB for testing and reviewing.

Walton Chaintech are now selling a product both unique and interesting, that is thought to replace the more expensive 2.5” SSDs on the market. The device looks like a SSD, but inside it hides two removable CompactFlash cards, that can function in both RAID1 and NRAID modes, depending on what we need more: data reliability or more capacity.

About Walton Chaintech :
“The Chaintech Computer Corporation was founded in November of 1986 and introduced its own motherboards and video cards into the computer hardware market. Before long, Chaintech earned a reputation for producing state-of-the-art motherboards, boasting unsurpassed performance, extreme reliability, and aesthetical design. Its video cards were also praised by critics and consumers alike, earning recommendations and awards throughout the international community. With an established, technologically sound foundation, Chaintech was now primed to focus on product diversification.

In 2005, a partnership was formed between Chaintech and Walton Advanced Engineering in order to introduce new products into the memory modules markets. Walton Advanced Engineering, known for their integrated circuits (IC) testing and packaging, provided valuable expertise and insight in designing, manufacturing, and packaging the newly introduced products. The partnership was further solidified by Chaintech’s membership into the Passive System Alliance (PSA), whereby a total of twenty companies, five of which are publicly traded, would ultimately mutually collaborate and share resources.

Currently, the products of focus have been on dynamic random access memory (DRAM), flash USB drives, flash cards, graphics cards, and solid-state drives (SSD). Although the products have varied, the high standards have been sustained. Walton Chaintech continues to wholeheartedly devote itself to create products that satisfy the needs and wishes of the consumer.

The scope of Walton Chaintech’s success can easily be measured by its international presence. As favorable critic reviews and product demand increased, distribution partnerships in every major market formed. Walton Chaintech’s reach touches continents like Asia, America, Australia, and Europe as well as traditionally defined markets like Russia, Japan, Korea, and China.

Under the support of the PSA family of corporations, Walton Chaintech is able to take advantage of the plethora of resources provided. Taking advantage of technologies and insights gained from providing products and services like printed circuit boards (PCB), hardware components, and IC packaging technology, Walton Chaintech is in a prime position to push the envelope in terms of design, functionality, and utility.

The expansion of products and services did not end there. Walton Chaintech also began to provide electronics manufacturing services (EMS). Among the available services were subcontracting processes including original equipment manufacturers (OEM), original design manufacturers (ODM), and contract electronic manufacturers (CEM). All operating under the Fortech Electronics name, the Walton Chaintech owned company boasts clients like HannStar, Zyxel, Haier, TCL, BIOSTAR, and PNY, just to name a few. As an award winning manufacturing partner due to our relentless efforts for customer satisfaction and meticulous methodology in quality control, Fortech Electronics provides an EMS second to none.

During the same year in which Chaintech and Walton Advanced Engineering entered the memory module markets through packaging, APOGEE was founded to enter the memory market through innovative product design and functionality. In 2006, APOGEE introduced its first refined product. Integrating excellence in the research and development aspects of the company with the already established rigorous testing methods of Walton Chaintech, APOGEE’s products were of the utmost quality and raised the standard for the entire industry. The only product in the entire market utilizing the “wafer-in” and “module-out” technology, APOGEE stormed into market. In 2008, DDR3 and DDR2 RAM developed by APOGEE gained international acclaim and passed the high standards of the Computer Memory Test Labs (CMTL). In 2009, APOGEE announced that it would enter the Mainland Chinese market with its award winning products.

In the 20 years of Walton Chaintech, success has been founded on the four principles of ingenuity, quality, distinction, and customer satisfaction. With the never ending pursuit of developing new technologies and designs, Walton Chaintech places its focus on the consumer and their demands. As an industry leader, Walton Chaintech proudly takes it upon itself to keep the customer’s needs at the forefront of future products and services.”


“RAIDON Technology Inc. was established in year 2000; as a Professional Storage Solution Provider, RAIDON is focusing on designing and manufacturing RAID and Storage products and developing brand name.

In the further future, RAIDON will keep working hard on designing and developing storage solution for small & medium enterprises, SOHO groups and consumers with professional technology. Combined with the ability of developing and band marketing, RAIDON expects to become a professional small-scaled storage solution provider and provide the most complete and comprehensive data security service.”