The AORUS brand name is a premium gaming brand stemmed from inside the Gigabyte company; look at it in the same way ASUS had started off with the Republic of Gamers brand. Made by Gamers for Gamers would be the easiest way of explaining things. The AORUS brand covers a full spectrum of gaming products ranging from GeForce GTX series gaming VR ready laptops, gaming motherboards and graphics cards, mechanical gaming keyboards to gaming mice, all to offer you the gamer the best gaming experience ever. Today we have a look at one of their high end motherboards, the AORUS GA-Z270X-Gaming 7 motherboard.

The AORUS brand has currently 5 different motherboards in the line-up, all based on the high end Intel Z270 chipset, from the high end watercooling ready Gaming 8/9 versions, to the midrange Gaming 7 Non and K version and to end with the Gaming 5 non and K models. All boards are four dimmers, depending on the model, their sizes vary from  E-ATX to ATX form factor motherboards. It would be nice if Gigabyte would add a smaller mATX board in the pipeline to complete the existing range.

Without going to much in detail, the main difference is that the Gaming 9 is the only motherboard that can handle up to four graphics cards (talk about overkill). The rest of the AORUS line-up has got you covered with up to max 3 GPUs.

The Gaming 8 and 9 both feature either a Bitspower or EK Waterblock to cool down the "hot" VRM areas around the CPU socket.

HDMI 2.0 is only present on the two high end models, the rest feature the standard HDMI 1.4 Display Interface.

Audio wise the Gaming 9/8 and Gaming 7 feature a Creative Sound Blaster audio chip, the other models feature the sound from a basic ALC 1220 audio chip.

LAN is provided by either two Killer NICs for the Gaming 9, or a combination of the former with an Intel LAN controller. Only the Gaming K5 has a single LAN RJ45 port, so yes you guessed it the rest has 2 at your disposal. On-board Wireless connection by the Killer AC 1535 is reserved for the Gaming 8 and 9 models. 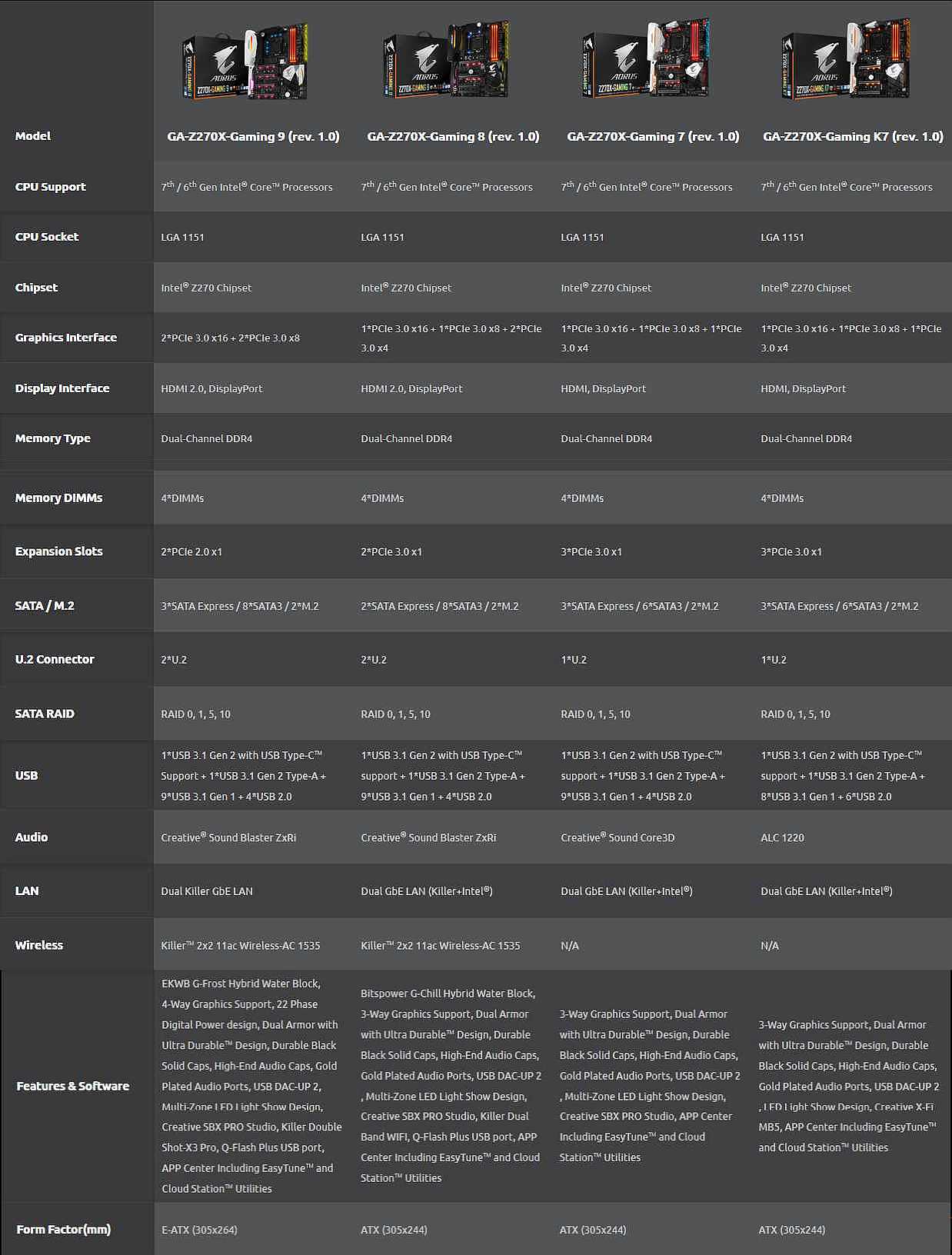