HP notebooks are known to many users as daily or as business products, this as they didn't have any or that many notebooks specifically targeted at the gamer community. From the press release in October we at MadShrimps were intrigued by the direction HP took, so it was worthwhile to test the new gaming notebook and see what it is made off. Best of all HP told us that this new announced product would be very competitive in price too; now I'm an avid gamer too and have never been so found of notebooks being able to replace a high end desktop. Maybe the HP Pavilion Gaming notebook could make me change my mind?

It has been a long time since I've done any notebook review, so plz bare with me. We have received the HP Pavilion 15-ak020NB at MadShrimps; this is the high end offering in the HP Pavilion Gaming series. Other variants will also be available, though we haven't seen anything official yet about the different processor, memory, storage or graphics card configurations, so we have to focus on the Notebook we received. 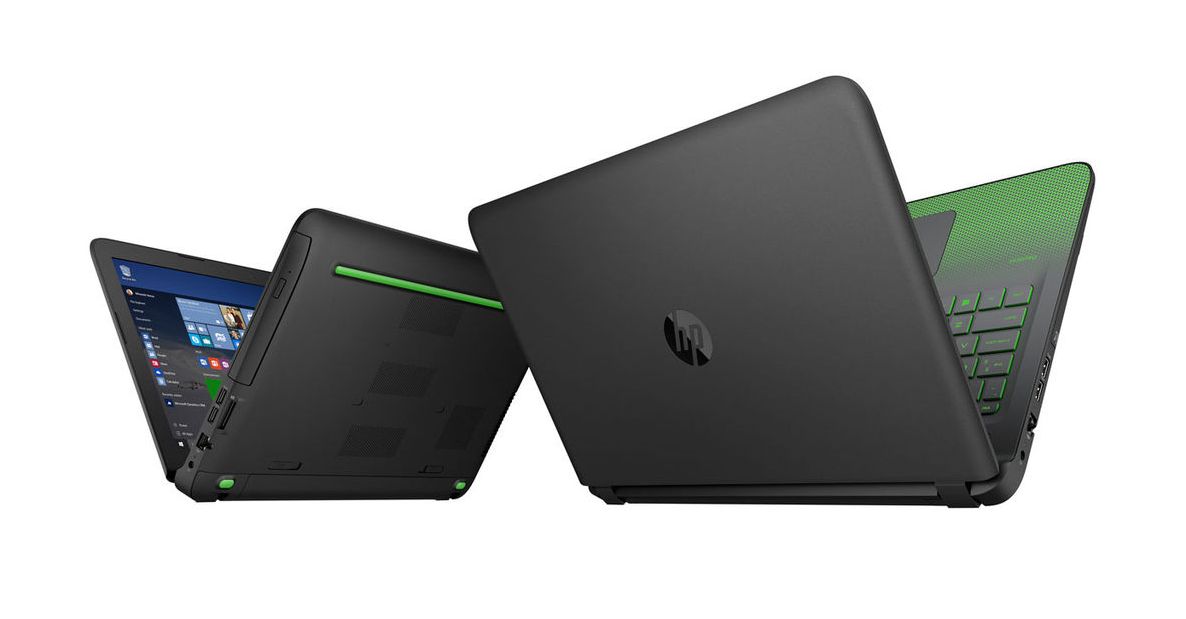 The HP Pavilion Gaming notebook is a slim notebook, measuring under 29mm in thickness, pretty awesome for a portable gaming PC in my book. A few years back we were still used dragging the old MSI GT notebooks, which were bulky, weighed a ton coz they were build like a tank. Gaming notebooks have evolved mainly thanks to the efforts from both the processor and the GPU manufacturers, becoming more and more energy efficient and as the performance per watt increased it resulted in lesser cooling requirements and as a huge bonus thus resulted in far longer battery life. Last but not least the thickness and thus the weight of the modern notebook got reduced too, making the latest Gaming Notebooks  truly portable. 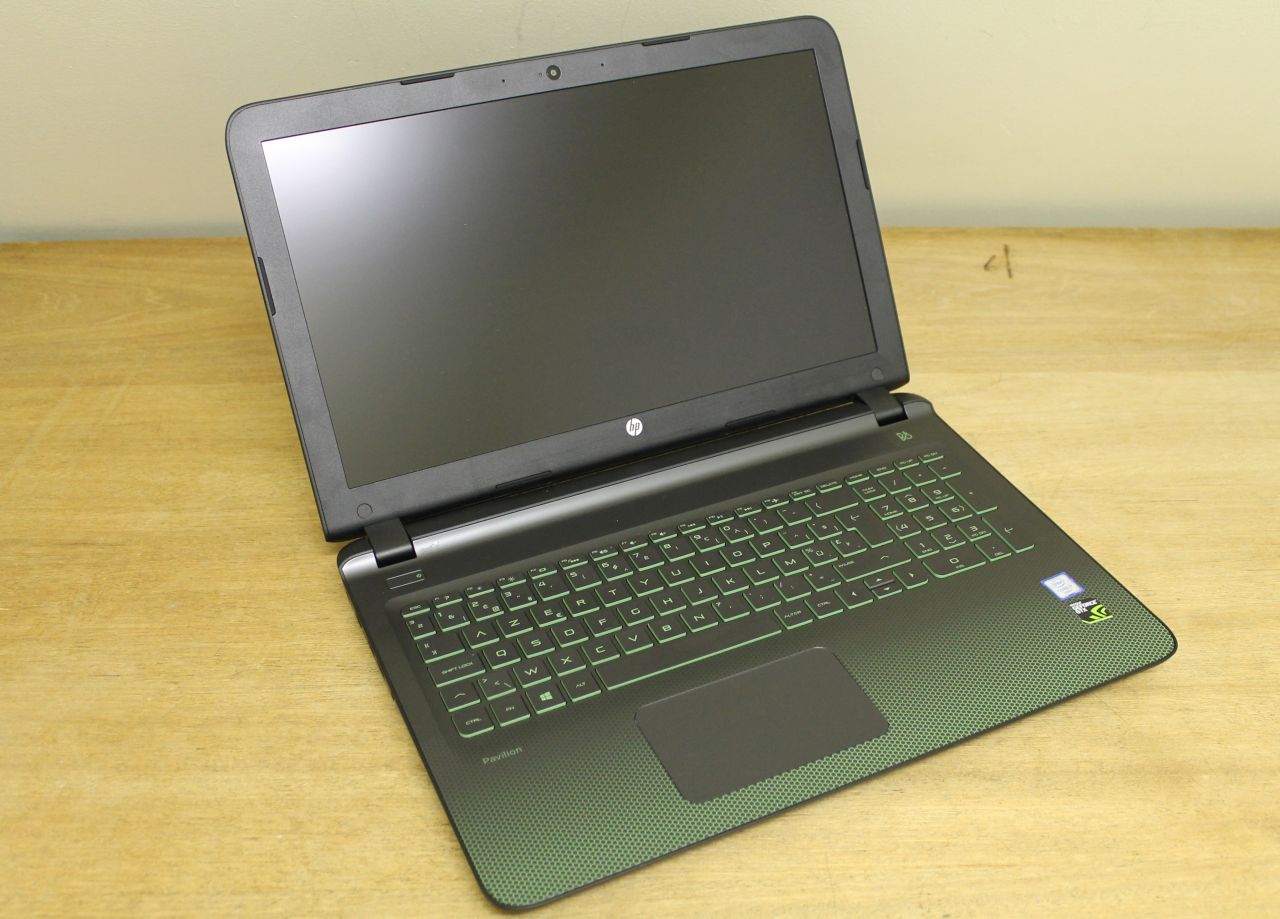 The  Pavilion Gaming notebook is available in one color: black; the outside has no bells nor whistles, it looks like a casual notebook with a nVidia-themed print on it. Looks can be deceiving though as there is some real horsepower underneath that keyboard. Let us list the different specifications before going into detail:

A pretty solid bundle is packed inside the slim HP notebook casing. One always has to take into account that a desktop game PC or even a notebook game PC's is always limited by the weakest hardware part. At first glance HP has got us covered for some hardcore gaming action with fast loading times thanks to the usage of a Solid State Drive. Before continuing let us do a breakdown now of the individual listed components: 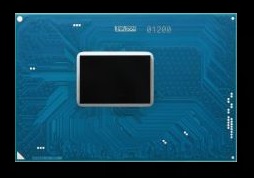 Intel I7-6700HQ CPU: The 6700HQ  processor is a quad core with Hyper Threading functionality, based on the Skylake architecture and manufactured in 14nm technology. The 6700HQ clocks, when all cores are loaded, somewhere between 2600MHz and 3100MHz; depending on the load it can boost up to 3500MHz on a single core. The i7-6700HQ is equipped alike the desktop counterparts with an integrated graphics device, the HD Graphics 530. This should allow the end user to play slightly older game titles on medium or low detail level, though that is not what this laptop was designed for :p 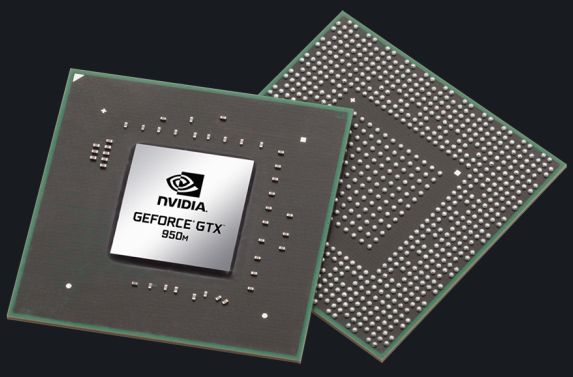 nVIDIA GeForce GTX950M: The nVIDIA GeForce GTX 950M is a DirectX 11-compatible laptop graphics card based on the Maxwell architecture. Manufactured on 28nm, it offers 640 Shader units clocked at 993Mhz with a boost clock foreseen of 1124MHz. Two versions are floating around and the difference is in the usage of the dedicated memory: either it uses the slower 4GB GDDR3 900/1000MHz or the faster, thus more expensive GDDR5 memory running at a whopping 5000MHz. Bandwidth wise this is the difference between 30GB/s or 80GB/s. Looking at the GPU-Z picture below HP opted for the cheaper variant with the GDDR3 memory; this should be responsible for a 10-15% performance loss versus the GDDR5 model. Testing has to highlight if this could be the Achilles heel of this gaming notebook. 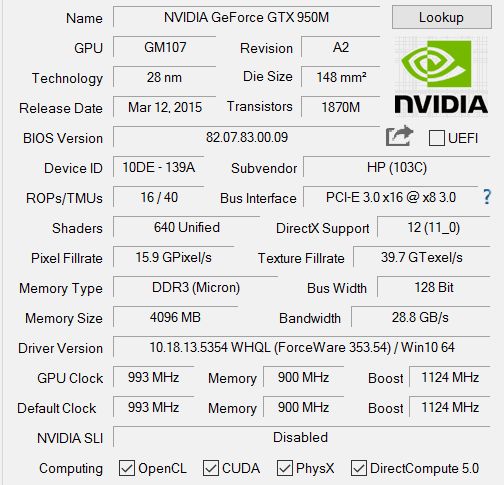 16GB of DDR3 memory is stock with the high end model, running at 800MHz in dual channel configuration. There are no free slots so either you settle with this or have to swap the two modules for higher density ones, though for most users 16GB will be plenty.

For fast loading times HP included a Samsung 128GB SSD. Now 128GB is not a lot, but the full install of the OS and the HP utility software suite and other programs still leaves close to 72GB free on the drive. The end-user still has the chance to install several of his favorite games on the faster SSD; on paper this SSD is not a screamer with a sequential read of around 256MB/s and only a 136MB/s sequential Write, though I've been running an older OCZ OCTANE drive, which was a few years back one of the slower drives on the market. Yet I'm still up and running in a matter of seconds when powering on. Even the slowest SSD will knock the socks off your mobile HDD.

For Storage the 1TB 2.5" Western Digital drive should provide sufficient storage for most mobile users will ever need. This is a 5400rpm version part of the Western Digital Scorpio Blue series and is considered an a medium range drive. While it is equipped with a SATA 6.0 interface, it has to be mentioned that even faster laptop drives were hardly able to saturate the previous SATA 3.0, so consider this more as a PR gimmick than anything else.

Good to see HP opted to still include an optical drive in their Pavilion Gaming notebook. Not all users have abandoned DVDs and such as install, storage or backup medium. 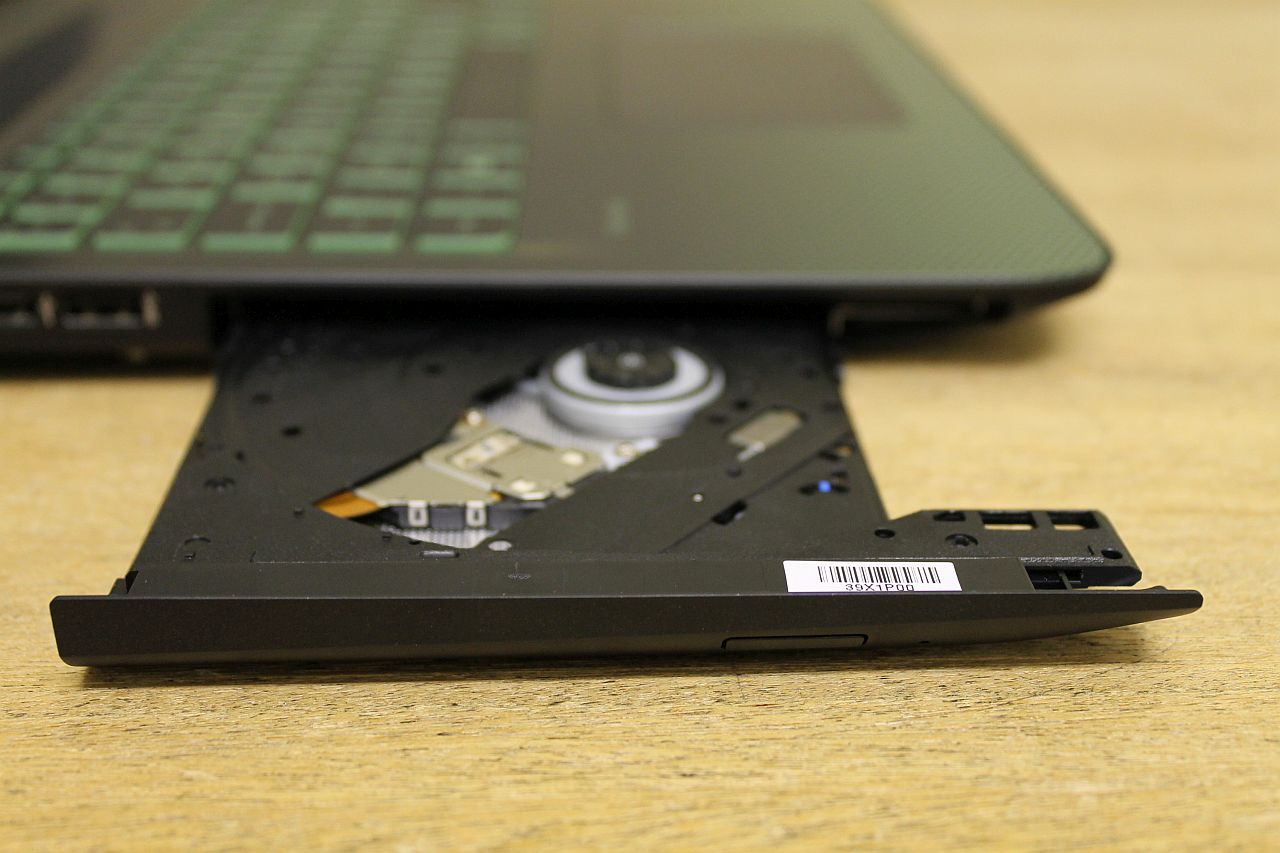