So what is all the hype about? To sum it up: the launch of Intel's first eight-core 16 threads desktop processor, codenamed Haswell-E which supports the brand new DDR4 memory. To achieve this Intel had to redesign their LGA 2011 socket and X79 Chipset, thus for Haswell-E the processor socket is now baptized as LGA 2011-v3 and the new Intel® X99 chipset is there to steer all the ongoing action in the right lanes. Take note that there is no backward compatibility with previous LGA 2011 processors. Also no die shrink has been applied as this is still done on a 22nm wafer.

The addition of two extra cores for the high end i7-5960X version will rejoice benchers, multi-task addicts and encoders. Gamers in general are maybe less impressed as the Graphics card(s) is the most vital part in their gaming setup to provide ultra smooth FPS.

Haswell-E is a solid performance upgrade over its predecessors for those that use on a daily basis multi core enhanced software. This time there will be  no more quad core entry model. The i7-4820K has to give way for an unlocked hexacore model in the form of the Core i7-5820K. This might be a viable and interesting option for a multi-GPU crunching/gaming setup as this hexacore model retails only a bit higher than the mainstream Devils Canyon 4970K quad core. Sporting 15MB of level 3 cache, a TDP of 140W and quad channel DDR4-2133 support it could become one of Intel's best sellers for this platform. The 4820K was not so popular as it hardly had any benefits over the mainstream quad core Intel processors. On top of that the requirement of quad channel memory and a more expensive LGA 2011 motherboards made this entry model a not so hot selling product.

The mid range Core i7-5930K is still a hexacore model, but the biggest difference versus the i7-5820K is the added support for 40 PCie 3.0 Lanes instead off the 28 ones for the low end model. This implies that the i7-5820K can only run Tri-SLi ( 3 x PCIe at x8/x8/x8), while the 5930K and 5960X are fully quad-SLi compatible. Yet since the days of AGP 4X versus 8X the gains on paper hardly reflect real life performance. Tri Sli with trice x8 is more than plenty. The slightly higher stock speed (3.5 versus 3.3GHz) and idem ditto higher turbo speeds can easily be circumvented by an easy overclock. Quickly comparing the i7-5930K versus its predecessor the i7-4930K: the latter had a lower base clock of 3400MHz, however a higher Turbo up to 3900MHz (vs. 3.7Ghz). The slightly higher amount of L3 cache (15MB vs. 12MB) and the architectural improvements of the Haswell series together with the usage of DDR4 memory has to provide the performance boost over its predecessor. 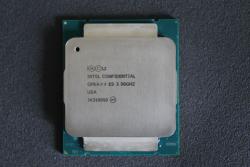 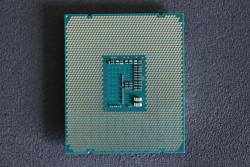 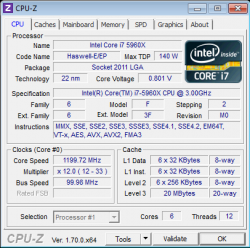 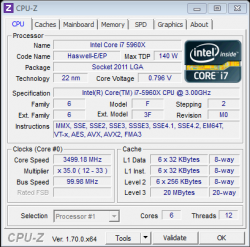 The Haswell-E flagship, the Core i7-5960X (eXtreme) is Intel's first octacore desktop processor. There are already several 16-threaded server variants, but those processors were not intended to be used by home users, while the base clock of a mere 3Ghz and Turbo speeds up to 3500MHz sound very basic, however the 8 cores/16 Hyper threaded specs might make it more interesting for those that wander daily in multi-threaded environments. The Level 3 cache has been upgraded to 20MB versus 15MB for the i7-4960X and of course again support for high speed DDR4 memory. The Die size has been drastically increased from 257mm² to 356mm² and the transistor count from 1.86billion for the i7-4960X to 2.6 billion for the Haswell-E 5960X. 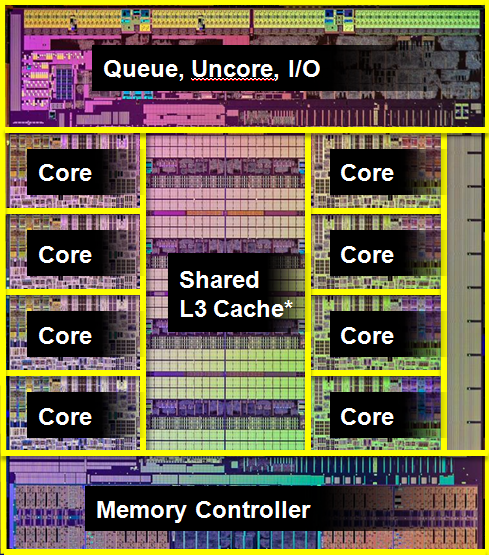 Intel is proud that the sources used to produce these Haswell-E processors are all coming from what they refer to as conflict free zones. Meaning no war, no abuse nor any conflict is going on in them regions. Do they want to avoid any association as with LEGO and Shell not so long ago ?