Gigabyte continues to release new products in their orange themed overclocking motherboard series. The first of the OC series was the immaculate X58 OC motherboard, a trimmed down on features board, however purely designed to provide the ultimate overclocking experience. Sadly the X58 OC board arrived just a tad too late on the market to become a major selling product. Nevertheless a trend was set: deliver affordable, yet customized for maximum tweaking potential motherboard series. Other brands had similar overclocking friendly boards yet retailing at far more elevated prices. The predecessor, the Z87X-OC was one of the most utilized overclocking boards during the last year according statistics expert Massman from HWBot.org. Gigabyte had to live up to its name and make the Z97X-SOC FORCE as good or preferably even better…

Overclockers usually don’t care about all the marketing gimmicks which are added to a motherboard; solid components choice, durability, efficiency and tweak abilities at the lowest price are what most are looking for. The former are all the ingredients which could be found in Gigabyte’s Z87X-OC offering. Gigabyte also had a 4-way SLI capable board in the lineup, the Z87X-OC FORCE, yet it’s pricing was far too elevated to become anywhere near as popular as its little brother did.

Today we have a look at Gigabyte’s latest installment in the orange OCing series the Z97X SOC FORCE. Yes this is the high end model, but retailing now at a similar price level as the previous non Force Z87X model. The non-FORCE Z97X-SOC retails at a price level of around 170 Euros, a mere 15 Euros less than the flagship model. The major differences between the two Z97X boards are: 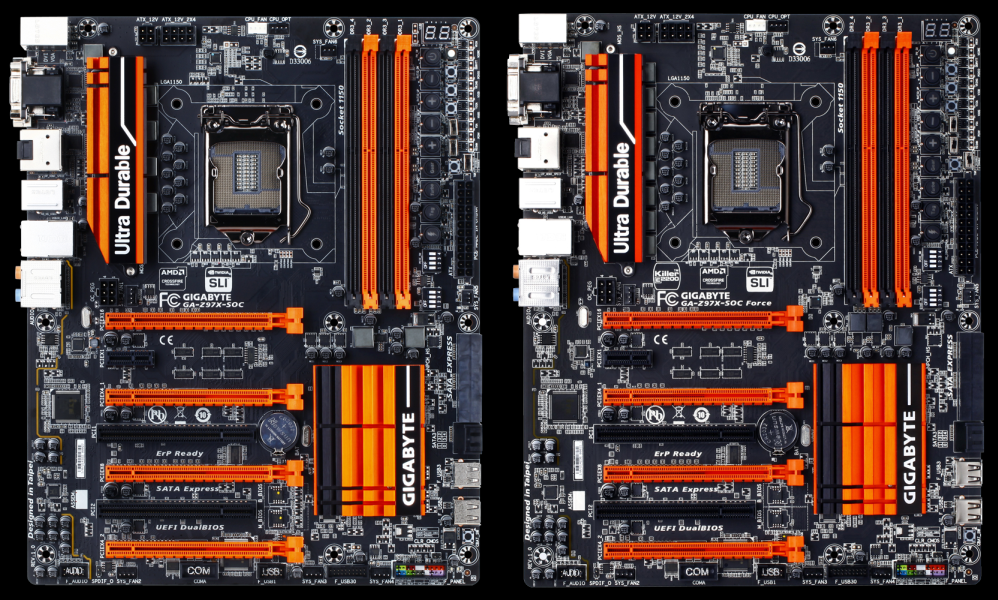 As you can see it is all about sacrificing components to keep the price tag balanced. Gamers or daily overclockers will find a good balance between OCing potential and audio capabilities with the non-FORCE model, while the die-hard overclockers could care less about this audio performance as it will be disabled from the first BIOS entry. Surprisingly the integration of the expensive Killer NIC and Bluetooth feature on the Z97X SOC FORCE remains debatable.

Gigabyte has added a 3rd member to the Z97X lineup, the world memory record breaking Z97X SOC FORCE LN2 board, a motherboard solely designed to counteract the ASUS Impact dominance in the memory overclocking category. For daily users this board has no value as no mounting holes are foreseen to mount any type of cooling device.

Back to the star of today, the Z97X SOC FORCE motherboard:

The new Intel Z97 chipset, besides the added support of the SATA EXPRESS is not a real marvel of innovation feature wise, however Gigabyte has refreshed the Z97X SOC models versus the previous Z87X OC boards. Sin0822 has created a nice picture with the important differences between the new and previous OC board series. 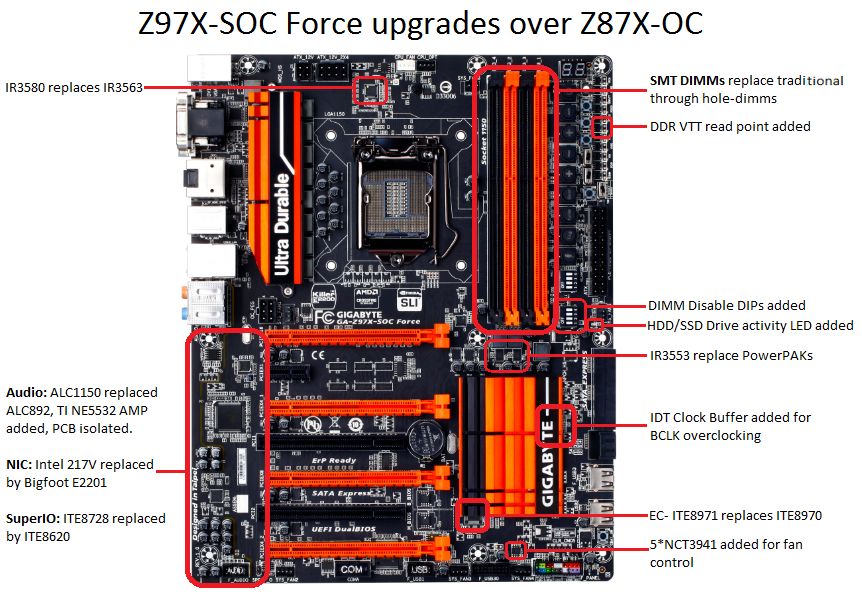 The two biggest differences are firstly the SMT DIMM technology, which replace the traditional through hole-DIMMs; secondly the possibility to disable the DIMM slots is a novelty. One of the main culprits when benching Haswell hard was condensation in the first DIMM slot. This should be an issue of the past with the DIMM disable dip switches. 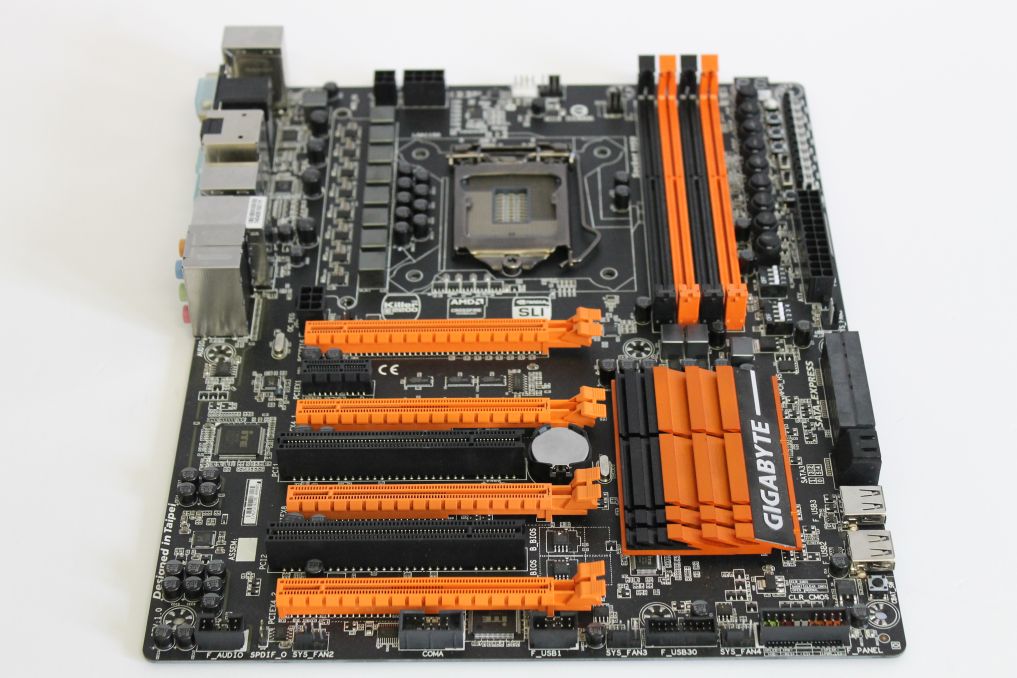 The Z97X-SOC FORCE is Gigabyte's high end entry for the overclocking community, being it daily tweakers or the die-hard extreme cooling purists, hence why this board has got a beefier 8 phase CPU solution relying on 40A ICs steered by the IR Digital power 3580 chip. All round used are black anodized 10K solid state capacitors, providing ultra-low ESR under any circumstance. 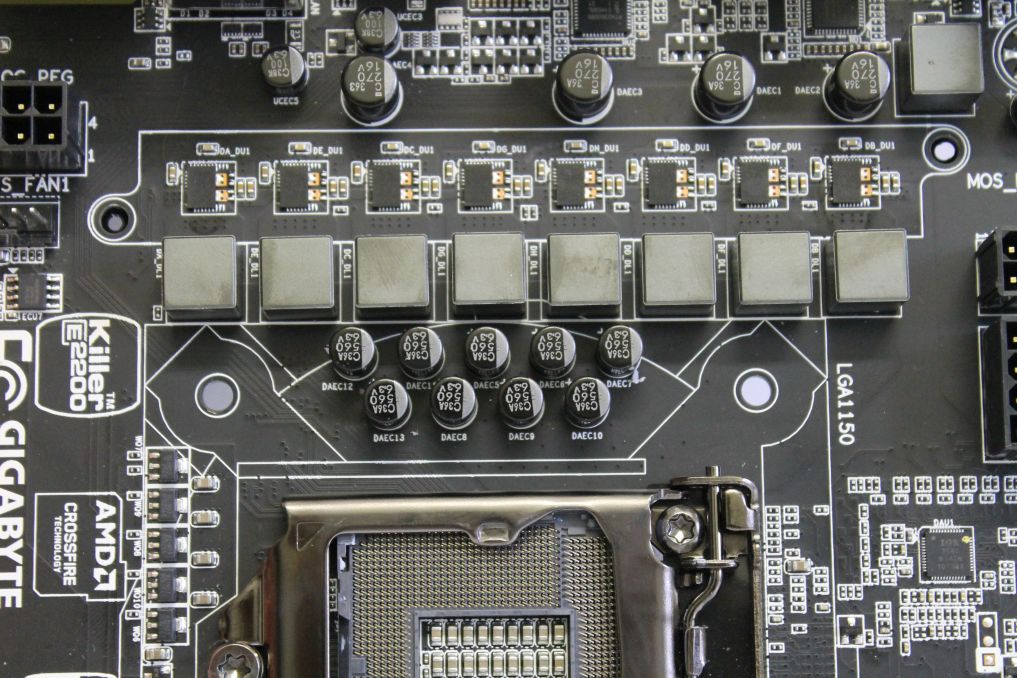 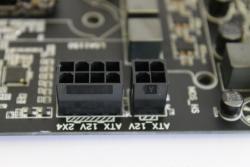 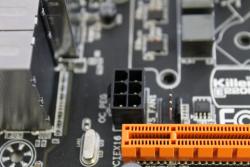 Another sign this board is designed from the ground up to be a rock stable extreme OCing motherboard are the 8+4 pin 12V ATX power. Secondly the 6 pin power PEG, located above the first X16 PCIe slot, allows more stable power delivery when running extreme multi GPU solutions.