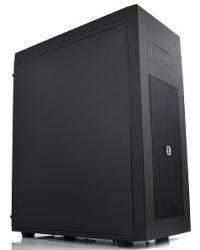 The company SilentiumPC was established in 2007 in Warsaw, Poland. Their main objective is to offer quality products at a very affordable price level;  the latter is achieved by applying cost-cutting in banners, promo gear, packaging... however not in the quality of the product itself. The SilentiumPC lineup consists of cases, CPU air coolers, power supplies, fans, notebook cooling and other accessories. Today we introduce you to the SilentiumPC Aquarius X90: a mid-tower case, designed specifically for the liquid cooling enthusiasts in mind. SilentiumPC labels it as the ultimate choice for high-end gaming systems with compact dimensions and at an amazing value.

The rear 140 fan as the three 120mm fans spin at a maximum rpm of 1200rpm, which should provide decent airflow at a very respectable noise level, especially the standard triple front fan setup is surprising for a case in this price level. If needed one can opt to replace the triple front fan setup with two larger 140mm versions; adding extra cooling is possible via the optional addition of two 120 or 140 models in the top compartment. 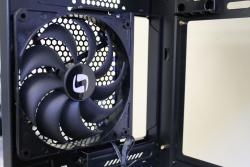 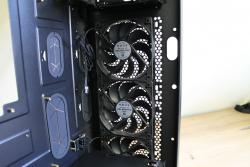 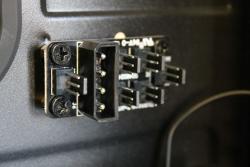 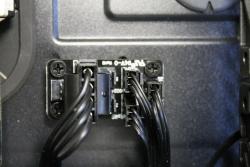 Since so many fans are included out of the box, it is pretty neat to see the inclusion of a six port fan hub. Too bad this isn't an adjustable one to allow the end user to have complete control on the rotational speed of up to six fans.

Some of the water cooling options will be covered in the build part, nevertheless how does a triple rad sound for the front, a double rad in either a 240 or 280 version in the top compartment. Plus to top it off the possibility to mount a 120 or 140 rad in the rear of the case; impressive stuff not?

Storage capacity looks at first glance sparse, with only two removable tool-free brackets. The provision to install either two 5.25" optical drives in the front part or one optical drive and a floppy drive or card reader. 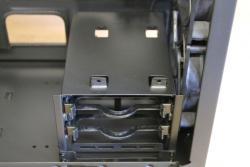 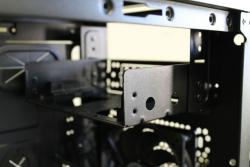 Even though SilentiumPc advertised support for up to four full blown 3.5" HDDs. The below animation tells the tale... again a very compact solution provided by the SIlentiumPC team.

To enhance the compatibility when installing a thick front radiator, the position of this particular HDD cage is adjustable.