Today is NDA day for Intel's brand new Z97 platform. Sadly there will be no launch article on MadShrimps; simple reason is because we have experienced some issues with the current Haswell refresh processors on our Z97 testbeds. MadShrimps has tested Z97 with the 4770K and did a comparison between Z87 and 297. That data is ready and was ready to be published, however the outcome we got when briefly testing the i7 4790 from the brand new refresh range is concerning to say the least. Time for a brief explanation of what happened today...

Due to the absence of Haswell refresh samples most hardware sites will have done the same as we did: testing a whole stack of motherboards on the previous flagship processor, the Intel i7-4770K. Nothing wrong with that and most unbiased sites will reveal the performance difference between the two chipsets is close to none. In some cases even a tad slower due to immature BIOSes. Nothing wrong with that at all... been there, done that.

One of the strong points of Z97 will be the integration of the M.2 and/or the Serial Express Storage solution. The eagerly awaited K skew Devils Canyon Haswell version will probably see the daylight somewhere around Computex and till now will only be fully supported by the Intel Z97 chipset based motherboards, but that marvel processor will be for later.

Back to today, we fired up two of the Z97 boards, which were flashed with the latest bios and installed the retail versions of the i7 4790 Haswell refresh processor; for your info we stress again the word RETAIL. The engineering sample is still on the way. Neither did we opt to simulate the new processors by OCing the previous released CPUs, meaning this processor and board is the same gear that you will be buying from your local PC vendor from today. 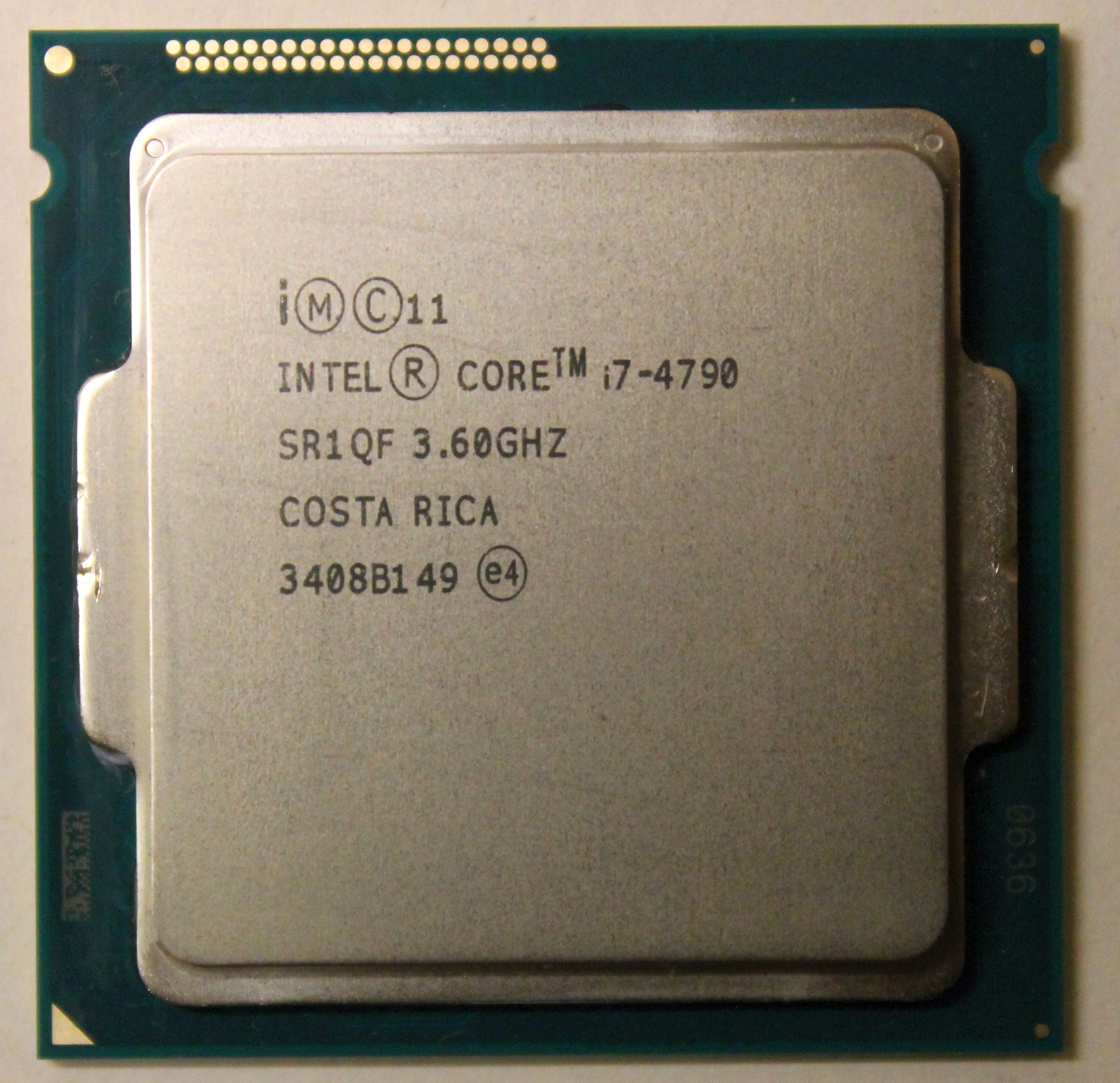 Usually we start off with single threaded tests, just to compare quickly what the extra clocks deliver; all went fine, till we launched Wprime. A multithreaded test, that stresses all the cores of your beloved processor. Strangely enough we spotted a big difference with the 4770K results: weird as the new 4790 CPU has 100MHz higher stock clocks as a similar higher clocked Turbo. We then fired up Cinebench R11.5, bummer again a slower result. What about the chess benchmark Fritz 12? Think you get our drift, yes all multithreaded scores were lower than the K skew 4770 model we retested a week ago.

Time to scratch our heads and start brainstorming what is wrong here. How can a CPU with 100Mhz lower clocks still be faster? The Windows 7 64bit Pro OS was a fresh install and patched. Latest Inf and ME drivers, including the ME Win7 patch were installed.

Time to share some of our results with the masses, the included data is comprised of the following outputs: 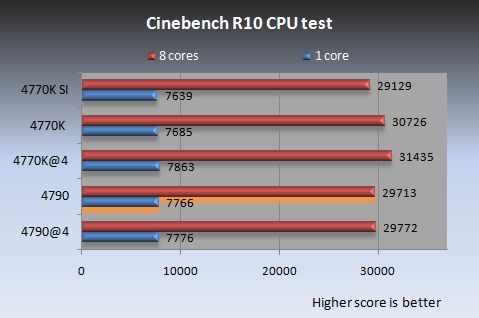 The results are all done on the Gigabyte Z97X-OC Force, as we had close to no efficiency discrepancies versus ASRock Z87 OC Formula, neither with the i7-4770K nor the i7-4790 CPU, so we left out them charts.
Looking at the Cinebench R10 test spot the performance advantage for the 4770K versus the news 4790 CPU in the multithreaded test. At stock rated speeds there's a 100Mhz discrepancy between these two processors, yet the lower clocked 4770K processor grabs the win. Then again in all of the single threaded test the 4790 takes a normal lead over the 4770K. Puzzling as the overclocked results indicate the turbo multiplier is sort of properly working as the outcome between the stock speeds (Turbo 4Ghz) is similar to the manual 4GHz setting. Last but not least when retesting the 4770K at the stock Intel Turbo setttings things look a lot better for the new 4790 processor. Thus test one concludes it is all in the Turbos :) 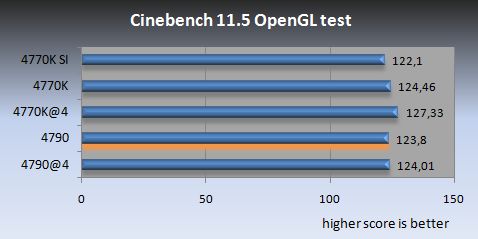 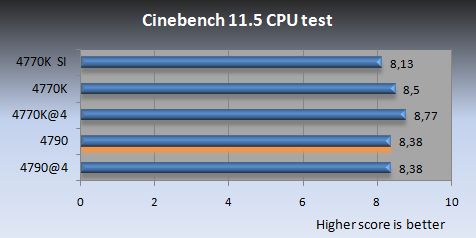 The CPU test of Cinebench R11.5 tells the same tale: the i7-4790 Turbo is working according Intel specs. The performance difference versus the aggressive Turbo of the 4770K is all thanks to the Gigabyte MultiCore Turbo implementation. Keep in mind these scores are achieved on the same testing platform. Wprime 1024 also gives a 4 sec difference at stock speeds. Increasing up to 9secs when all the 4770K cores are running at 4000MHz. Time to call Mulder and Scully and sort the BIOS code :) Testing the 4770K at the stock rated Intel Turbo speeds put everything again in proper order, thus the 4790 just outpacing the 4770K. 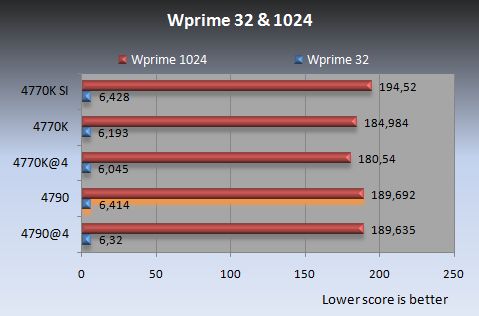 Here are some snippits of the test results: 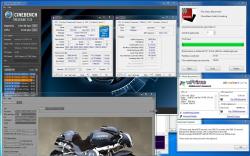 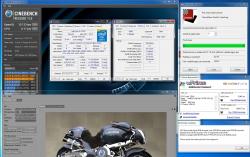 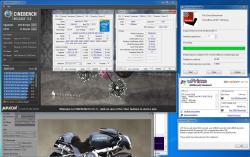 If none of the above results got you worried, you will probably remembered what happened with the launch of P67 and the immaculate SandyBridge processors. Not much performance difference was expected with the Z97 chipset release. The slightly higher clocked processors will not create an earthshattering difference either.

Though this outcome when we plugged in the retail processor was pretty unexpected. Single threaded applications were right on track, explainable by the slightly higher imposed clocks. Nevertheless why the multi-threaded applications got such a performance hit left us initially puzzled. Swapping the Z97 boards or even opting for the Z87 test board, revealed no performance jumps for the 4790 CPU. Crosschecking with some other reviewers, some had a similar experiences. Their own prerogative giving them the freedom to publish these revelations yes or no. We submitted feedback to the board manufacturers, though during the weekend hardly anything will get read or replied too.

Though initially this sounded kinda familiar and rang a bell. Recalling another brand processor which required patches or adapted software to unleash its true colors. Now really this isn't what is happening here. Something else was going on. The above tests reflect it is all related to the Turbo multipliers, power settings and how aggressively they all function together. Though it remains intriguing that the OCed tests provide practically the same outcome for the 4790 CPU versus the out of the box clocks. Something which requires a bit more investigating if the Multi-Ccore Turbo is working properly yes or no on our Test platform with the new non SKU CPUs.

In case you have got inferior performance with your 4790 processor versus the previous flagship SKU CPU, the Turbo Multi-Core enhancement for the SKU CPU is probably too blame. Either manually OC each Turbo ratio and see if performance goes up. Or just await a BIOS update that might boost the Multi-Core Turbo without the need for any manual intervention. Question is will this feature be included yes or no for these new non SKU CPU's.  This article is all about not comparing apples with oranges.

Overal the 4790 is a tad faster then the 4770K, plain logic as it is clocked 100MHz higher. However it will all depend on how the motherboard sets the Turbo values of the 4770K. At the stock Intel Turbo multipliers the 100MHz extra clock speeds of the 4790 will give a small performance advantage. Yet if the board enables the Multi-Core Turbo for the previously released Haswell SKU CPUs then this Haswell refresh 4790 CPU is far slower versus the 4770K, even with the latter running lower clocks.