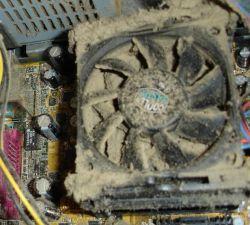 The State of CPU Cooling and Coolers in 2014

The CPU cooler market was one created by necessity, the heatsink and fan combo provided by AMD and Intel for their first processors were average at best, doing an okay job at cooling the CPU at stock speeds, but never doing so silently.

The CPU cooler market was one created by necessity, the heatsink and fan combo provided by AMD and Intel for their first processors were average at best, doing an okay job at cooling the CPU at stock speeds, but never doing so silently. The third party cooler market really took off when AMD launched their socket 462 Athlon CPU. A few years earlier Intel had done quite well with the Celeron 300A model, which was known for its over clocking potential, and thus provided performance equal to much more expensive models.

AMD Slot A CPUs did ok overclocking wise, but it was the socket version which really put AMD on the map for the budget conscious users and enthusiasts: buying a 900Mhz model, overclocking it to 1100Mhz, and saving $200 in the process. This concept of “buy the lower rated model, overclock it up to/past the higher rated model” still applies today, but the whole market around it has changed a lot. And this change has a large impact on the CPU cooler market.

In the early 2000 computer systems were bottlenecked by their CPU, a faster CPU translated immediately into a faster computer overall, thus a 20% boost in CPU clock speed was a big deal. Where for each 5% increment you paid $50-100, it didn’t take long for people to figure out how to save big bucks on the CPU upgrades. Both AMD and Intel looked the other way when people overclocked, and they didn’t encourage it, the CPU cooler/fan you received with a boxed processor was adequate at cooling the CPU at stock speeds. So thus exploded the 3rd party cooler market, in the year 2002 when Intel had launched their new Pentium 4 CPU line, we started our first CPU cooler reviews, pitting the best products of the moment against each other. The focus was all about CPU temperature under load, while noise was relegated to distant second place.

AMD and Intel did their Mhz race and TDP ratings went through the roof, topping out with a dual core Pentium 4, then dubbed “Pentium D” in 2005 which came with a 130W TDP rating, for a dual Core CPU. Today’s 6 Core, 12 thread highest end Intel model has the same rating. In 2005 AMD ruled the roost performance wise their Athlon 64 model, but the year after that Intel introduced a new CPU architecture which not only greatly increased performance, but also the heat output, and thus the once thriving CPU cooler market which focused on “lowest temperature” was changing focus.

In 2006 the Intel Core 2 Duo was easily cooled by the monster heatsinks used on the Pentium and Athlon 64, overclocking the Core 2 Duo proved also very successful and thus started the search for the best balanced CPU coolers, which provided good cooling at acceptable noise levels. The stock coolers from AMD/Intel were still inadequate if you wanted get more performance out of your CPU. After the Mhz race of the early 2000s, we now have a Core race on hour hands. But unlike the Mhz race where every % increase translates into 1:1 faster computer overall, having more cores doesn’t necessarily mean a faster CPU. Single threaded applications benefit from a higher clocked CPU, pushing more computing cycles through one “clock”, having 24 cores doesn’t change the performance of those applications. Creating multithreaded applications is not straight forward, and some processes can’t be split up, doing so would actually make them slower.

As AMD’s market share started to slip they stopped ignoring the overclocking market, in 2007 they released a “Black Edition” of their CPU, which featured an unlocked multiplier, allowing for easy overclocking potential through the BIOS. Trying to once again be the underdog as they were in the Athlon days, more speed for less money, unfortunately they also showed Intel how to commercialize the overclocking market at the same time and remove the original “more for less” idea. The Black Edition was more expensive than the none-black edition, you could say: “but you can easily overclock to match a higher rated model”. That is true, but by this time the bottleneck of computers was no longer the CPU, so having a faster CPU didn’t automatically translate into a faster computer overall! It took Intel 3 year more years to do pretty much the same, they introduced a “K” series model which also came with unlocked features, features where you have to pay more for.

So today we have computers with CPUs from AMD and Intel, with multiple cores and these two facts stand out:

The whole ideology of “more for less” has been rendered impossible with today’s hardware. You need to spend more money to get a CPU/motherboard/memory combination that allows you to overclock, overclocking said system does not translate into faster performance on a 1:1 scale as the bottleneck* of today’s system is not the CPU or memory. (*overall performance of course, specific CPU intensive tasks like encoding, rendering etc will still see a measurable and noticeable improvement)

Now what has all this have to do with CPU coolers in 2014? Remember how the market was created by necessity, we needed better CPU cooling, to make our system run faster, and in doing so not crash due to overheating, a good CPU cooler made this possible. Today raw CPU power doesn’t matter as much, which means running at stock speeds is more than sufficient for the majority of users out there. Without the need to cool better, the focus has shifted now from “temperature above all” to “silence above all”, and even there 3rd party products have a hard time making a case compared to the stock coolers. The CPUs have become a lot more self-aware, they will disable circuits they don’t use on the fly, reducing overall heat output, coupled with smart metering in the motherboard BIOS and PWM fan control this translates into smooth fan speed control based on CPU temperature, out of the box. The 130W TDP rating of that Intel 6 core is valid if you load up all 6 cores, most applications will have a hard time using more than 2 cores, which leaves 4 cores idling, in short you can use the stock Intel/AMD cooler and never be bothered with fan noise or your computer overheating.

So are third party CPU Coolers unnecessary in today’s world? Once they were high on the list of must-buys for your computer, today they have become a niche and luxury product, aimed at those who recognize the benefit of building a computer with quality components, having a bit of overhead available in case it does get hotter than usual. They are now in the same line as buying a $200 computer case, a $300 motherboard and $200 power supply, compared to their $100 or less alternatives. You can get by easily with the $100 components, but having higher graded components with more features does translates into a better overall experience.

Since raw cooling power is not the biggest focus for new platforms, a CPU heatsink today has to keep your processor running below TDP rating at the lowest possible noise level, add into a very wide platform compatibility and we can make a case for a 3rd party cooling solution.

In the future at the site we will evaluate (less) heatsinks from known companies as well as new startups and see how they stack up to today’s standards and requirements; the of them posted not long ago and pretty much a good example for a product made for today: cheap, high platform compatibility, very quiet.