Enermax is trying to establish a position in the All in One market, however battling against the big names alike Corsair with a very diverse gamma is not an easy mission to accomplish. Though Enermax is back with two new products: the Liqtech and Liqmax series, the former is the high end version, sporting a thick 120 radiator or large 240 radiator and an aluminum waterblock. The Liqmax is the more budget friendly 120mm radiator version available in a single or push and pull configuration. Enermax tries to step away from the others with some nifty features to enhance the cooling performance; secondly the aesthetics of the today reviewed Liqtech 120X have been seriously overhauled.

The Radiator design is splendid, the red rubber stripes add that extra classy touch. The radiator dimensions are 153 x 120 x 43mm. Enermax also added another touch, by integrating the heatpipes in the fin area they are able to create a 120% bigger fin area cooling surface then a similar sized radiator with a conventional fin structure. 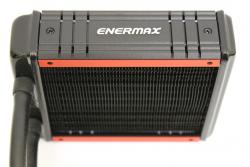 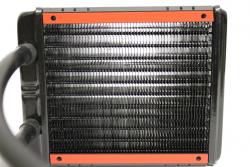 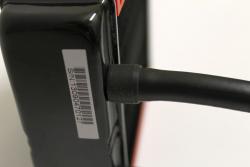 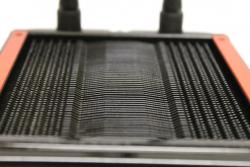 The Liqtech 120X sports out of the box two 120mm Fans for a push and pull configuration. With similar sized models the Push and Pull configuration allows for a higher heat dissipation versus a single Fan setup. The included Fans are in house design and are baptised as APS PWM contorlled Fans. One of the main issues with the previous Enermax models was the generated noise by the included Fans; with these higher pressure Fans this issue is partly addressed. Why partly ? Because to achieve high performance with a 120 radiator AIO model it has to be bundled with a high RPM Fan, thus resulting in a higher noise level. 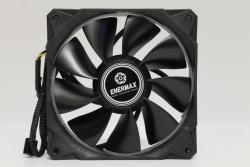 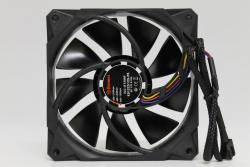 Alike the Tiwster fans of the previous AIO ELC generation , these Fans are equipped with a 3 step selectable switch, allowing the end user the choice to setup the Liqtech 120X to his needs. Depending on the CPU configuration the Performance mode is a good balance between performance and generated noise. Take note that the Fans are PWM steered, thus being able to be adjusted via either the motherboard's Bios or included software for even more tweaking. Only draw back of the selectable switch is that once the Liqtech120X is assembled it requires a disassembly of the radiator unit to allow again access to the switches.