Enermax, one of the pioneers in power supplies, has gone through some changes over the years. Alike Corsair the lineup has extremely diversified, starting with the addition of enclosures. Later on to be followed HDD enclosures, peripherals, moving on to processor air/water cooling and even notebook coolers have been added to the lineup. The TwisterOdiO 16 is a notebook cooler, nevertheless don't just consider the TwisterOdiO 16 as a basic cooling device, it has another build-in-extra up the sleeves. The included Dreambass technology and build-in speakers should be able to lift your notebook sound experience to a new level. Time to put the TwisterOdiO 16 for a spin and see what it can bring us in cooling as in the sound department.

The TwisterOdiO 16 is presented in a sturdy card board box with flashy box art. Immediately we noticed the light weight of the whole package, even thinking the box was close to being empty. The unit itself only weighs 780 grams. 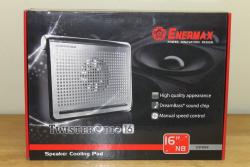 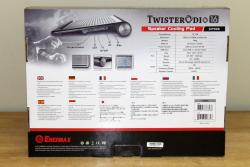 The TwisterOdiO 16 features a brushed aluminum design, making it less dull looking as many of the competitor's offering. The dimensions are 352mm x 270mm and a height of 52mm, supporting thus laptops of maximum 16" size. Putting the TwisterOdiO in a bag shouldn't pose too much of a problem. 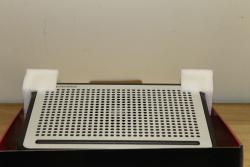 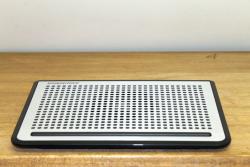 For cooling the TwisterOdiO 16 utilizes a 120mm Fan, being adjustable from 0 (off) to 1400rpm via a manual Fan speed control. Due to the fan thickness of only 18mm, the TwisterOdiO's design could be kept extremely slim. The two 40mm speakers are integrated on both sides of the housing. 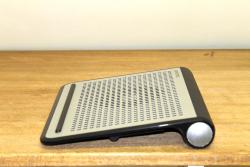 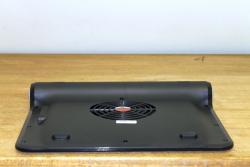 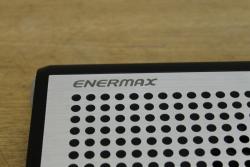 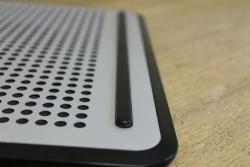 A thick rubber stripe on the bottom part of the TwisterOdiO 16 avoids that your laptop slips off this notebook cooler. Even our 17 inch, read non compatible notebook, remained firmly in place. 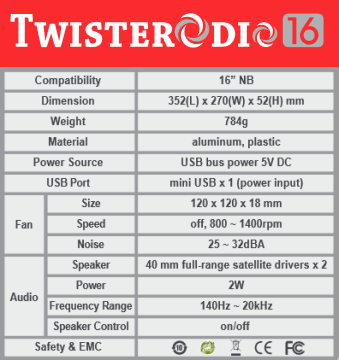