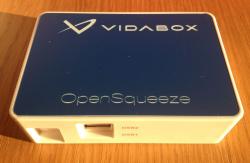 The OpenSqueeze Solo streaming media player is VidaBox's solution for the discontinued Logitech SqueezeBox community and fans. We compare this little box which has some unique and interesting feature to other popular solutions for getting audio sources played through your favorite speaker set.

Vidabox is a hardware solutions company who specialize in home entertainment. We previously looked at a couple of HTPC friendly cases, an iPad wall-mount and nifty wireless keyboard from them. Today we will take a closer look at one of their latest products, a Logitech squeezebox replacement for your home Soundsystem: the OpenSqueeze Solo streaming media player.

The first squeezebox was released in 2003 by a company called Slim Devices, in 2006 the company was bought by Logitech, they actively developed and released new versions up until 2012 when they decided to stop the production of the squeezebox. Thanks to the  cross-platform compatibility of the squeezebox some end-users have ensured that the squeezebox hardware and software solution will live on by using a Raspberry Pi based device.

This is where VidaBox steps in. They have built a hardware and software solution that surpasses the capabilities of a Raspberry Pi squeezebox device. Called the OpenSqueeze it comes with a high-end sound processing unit and plugs in directly into your existing Logitech Media Server setup. 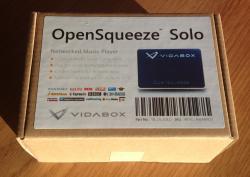 Below you can find a comparison table, pitting the OpenSqueeze against other audio streaming devices.

We have looked at Noxon products in the past, higher end products with build in speakers, able to stream media either locally from a UPnP source or over the internet using Noxon's own streaming services for radio stations all over the world. The Apple Airport Express is an internet router, but also comes with an analog/digital 3.5mm output jack. Just hook up a few speakers and you can play music through these speakers from iTunes on your PC/Mac, or directly from your iOS device. From iTunes you have access to a lot of local media, on iOS devices you can send any audio playing through these speakers (if the app supports it), this includes youtube playback, Spotify streaming audio, TuneInRadio and others. From iTunes install you can select multiple audio output devices, allowing you to play the same tune from speakers all over the house.

This is where the OpenSqueeze comes in, it is compatible out of the box with the Logitech Media Server, and once you configured a "mysqueezebox" account you can set up any number of streaming audio source, including audio stored in iTunes' media format. As with the Apple Airport Express you can configure more than one OpenSqueeze and play music all over the house, with the added bonus that you can send a different (or the same) audio stream to different OpenSqueeze boxes from ONE Logitech Media Server. This is one of the things that sets Vidabox' solution apart from the rest. Another is the high fidelity audio processing unit, the hardware is designed to reduce as much noise as possible (they include a special USB charger to further help this), and offer support for media playback up to 24-bit / 96kHz which is higher than both Apple and Noxon's solutions.

The wild card in the comparison table is the home-build/DIY device, since the Squeezebox is open source, there are several builds available for popular "small computing" devices, like the Raspberry Pi ( www.raspyfi.com ) or PlugComputer (SqueezePlug). VidaBox does point out that a Raspberry Pi by itself makes for a poor performer, allowing only 10-bit audio-output. But coupled with an USB DAC this drawback is completely removed. Of course getting such a device up and running requires a lot more effort and know-how, which makes it less accessible for the big public.