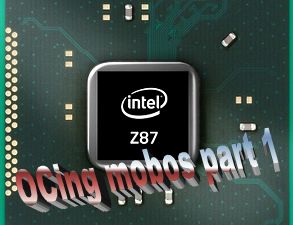 Today we will be looking at 3 high end Overclock optimized mainboards for Intel's 4th generation processors. Madshrimps received the Z87-OC Formula sample from ASRock, the Gigabyte Z87X-OC and MSI's Z87 XPOWER flagship. Three boards, although all listed in total different price categories, targeted specifically at the enthusiast crowd. Fully equipped to squeeze the last MHz out of your Haswell. Due to the specific nature of these particular boards we have adapted the review method slightly to go more into the efficiency aspect instead of listing all of the onboard features/chips.

Listing features is nice, but let's go a bit deeper what extra hardware makes this board into a real OCing monster.

Two OC buttons (+/-) are located close to the Dimm slots to quickly adjust the frequency. In windows they allow you to toggle between CPU multiplier, Cache Ratio, Core and Cache Volt. 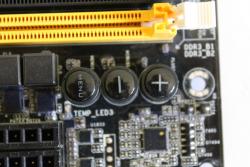 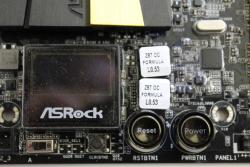 Instead of using a common Debug LED ASRock included the OLED display. Via the Menu button, next to the OC buttons, you can verify temperatures, frequencies, voltages,... .In windows it allows you to toggle between the different OC profiles. Thridly this button can also be used to go straight into the UEFI Bios.

The LN2 switch turns off the CPU's thermal protection and makes it ready for subzero pounding. A Slow mode switch can also be selected to force your CPU to run at the lowest multiplier ( 8x ). 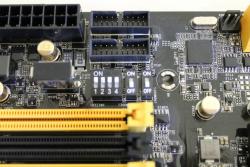 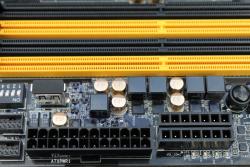 Via dip switches you can select to enable or disable the PCIe slots. No OCing board can do without a BIOS selection switch. Last but not least  Voltage checkpoints are installed too. 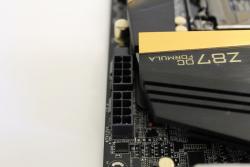 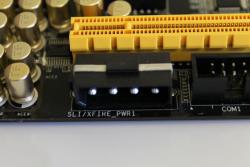 Two 8 pin CPU connectors and at the bottom of the board an extra Molex connector to feed them power hungry graphics cards.

Even though the listed hardware and features are nice, no real OCing board can do without a great BIOS. Turn the page to discover all the settings of the ASrock OC Formula board.

Comment from NordWolfe @ 2013/08/03
Finally somebody with the balls to tell it like it is. Now I would just like somebody to call-out Intel, for their woeful/unacceptable manufacturing quality control on their CPUs, and AMD, for their incompetence that permits these abuses from their rivals. At least, so it seems, AMD is now hiring the right people for their CPU division. Hope this pays off quickly so that Intel loses it’s arrogance, and total lack of respect for it’s customers. For that to happen we need many more true reviewers, such as yourself, and not Corporate Whores, such as we see in most sites, and youtube channels.
I salute your courage, integrity, and the knowledge you have on your mission.
Cheers.
Comment from leeghoofd @ 2013/08/04
Thx guys for the feedback. It's not what the manufacturers or people from the PR team want to read, but at least it's the truth based on hard facts... apreciated that my hard works is applauded