During COMPUTEX 2013 CORSAIR introduced a few new enclosures, the Carbide 330R and the 540 AIR version. While the first is more a refinement of exiting designs, the new 540 AIR sports a revolutionary design for mass production cases. The concept behind this case is that the case is divided in two halves. One side houses the mainboard, graphics card and cooling devices. The second compartment leaves room for  HDD/SSDs, optical drives and the power supply. Thus the airflow is maximized for the hotter running components of your favourite hardware. The big custom made cube cases, in particular the UFO series from Mountain Mods are the foundation for these particular multi-compartment designs. However CORSAIR seems to have pulled it off to bring this design to the masses at a fraction of the cost.

The right compartment is out of the box equipped with two front 140mm fans and one 140mm rear fan. The top part is able to house two more 140mm fans or a 240mm radiator. While the front is ready for a 360 radiator. More than plenty cooling potential in this cube sized Carbide enclosure. 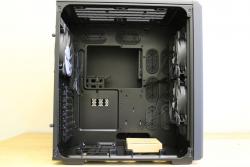 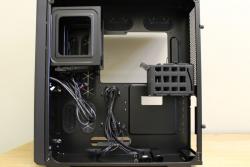 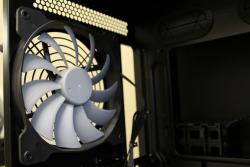 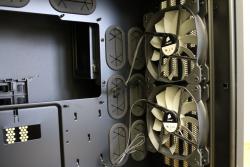 The three 140mm fans are based on the Air Flow 140 series, however being a more simplified version, this to reduce the costs. 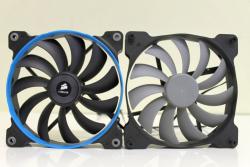 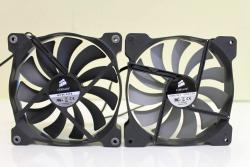 With the removal of two thumb screws the top filter mesh can easily be removed for easy acces via the top. 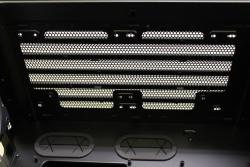 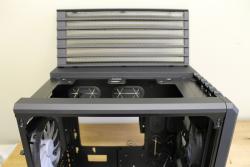 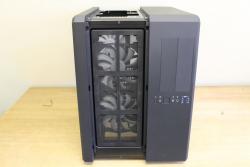 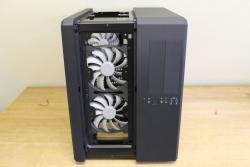 Once the top is removed, the front panel can slide out, giving access to the front cooling part. We can directly spot the two 140mm fans. The front dust filter is kept in position via several little magnets, a very neat way of keeping it all in position, well done CORSAIR! 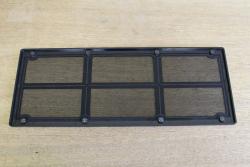 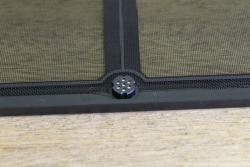