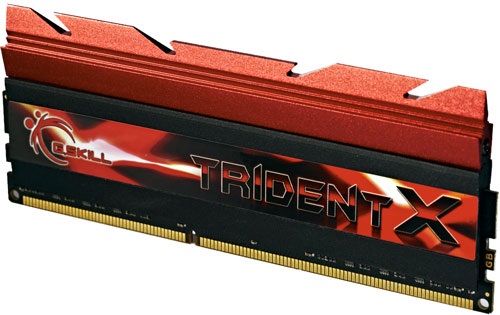 The G.Skill brand has become one of the more popular ones in the enthusiast community. This Taiwanese RAM company has won the hearts of many overclockers, especially due their binning methods and affordable price tag. Therefore G.Skill manages time after time to launch RAM kits in multiple speed/timing versions, different quantities and best of all they usually sport some overclocking headroom. G.Skill introduced simultaneously a new series of RAM, baptized TridentX, together with Intel's launch of the Ivy Bridge CPU. The RAM vendors had to readjust their binning methods, mainly due to the high ram speed support of Intel's 3rd generation CPU. Enthusiast RAM isn't solely based anymore on just tight timings, high RAM speeds is one of the new requirements. The TridentX kit reviewed today is one of the medium specced kits, comprised of two 4GB dimms running at a whopping 2400MHz RAM speed, however affordably priced at sub 75 euros. 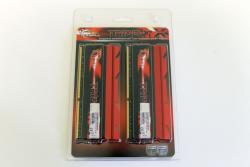 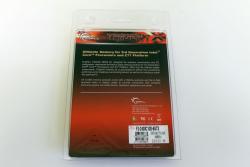 The heatspreaders are very heavy, not that lightweight package we are commonly seeing on most DIMMs, reminds me of the G.Skill Flare which sported a similar heavy heatspreader. For the overclockers, the removable top fin makes it more easier to put these sticks under extreme cold. Secondly by removing the top fin, you enhance the CPU cooler compatibility. Very slick design by the G.Skill engineering team. Be careful though, these fins are very sharp ! 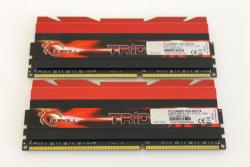 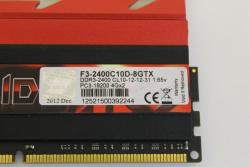 G.Skill has engraved the IC's to reduce or to make recognition as tough as it gets. Our review sample, dated from December 2012 is a double sided IC version. However there seem to be many different versions floating around. People have spotted single and double sided versions, meaning different ICs. Only thing G.Skill needs to warrant are the out of the box rated speeds. Overclocked speeds/timings can't be guaranteed of course. Yet this makes it hard for the enthusiast to accurately judge what DIMMs he's actually buying. 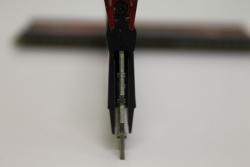