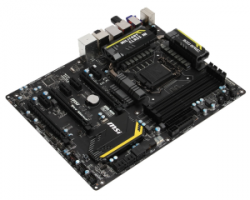 Designed for overclocking, usage of high grade military components and extreme durability are a few of the slogans the marketing people like to use to label a new product. The catchier the better, all of course to draw the attention of any potential buyer. Sometimes it's only the inclusion of an overclocking tool on the included driver CD that makes up for some of the bold PR claims. However for the enthusiast crowd almost each motherboard manufacturer has got a board or even an entire lineup specifically built with the highest quality components, OC friendly BIOSes and idem ditto board layouts. Sadly most of them boards retail at a steep price, as most OC designed boards are at the top of the lineup. Prices of over 350 dollars are quite common for an ATX format OC board. The Big Bang series are available already since the release of Intel's P55 chipset, MSI's range that are targeting gamers and enthusiasts. The Intel Z77 chipset based version is baptized as the BIG BANG Z77 MPOWER. Time to find out how this board reacts to the treatment at the Shrimps lab.

Most important for any motherboard is the CPU power circuitry. A 16-phase Hybrid Digital power enhanced CPU VRM is ready up to any task you want to throw at it. When removing the heatsink we get a better view on some of the military Class III components: DrMOS II, Hi-c CAP, Super Ferrite chokes (SFC) and Solid State Capacitors are used throughout. 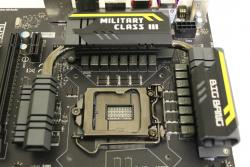 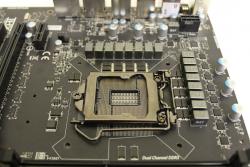 A very clean socket makes this board pretty easy to insulate, some other vendors pack far more Phases and maybe more stylish heat sinks, but are a pain to properly insulate. Job well done MSI ! For the CPU only one 8 pin power plug is foreseen, some vendors tend to include two on their flagship boards. 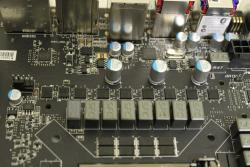 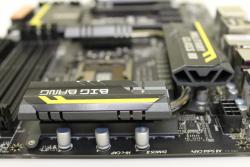 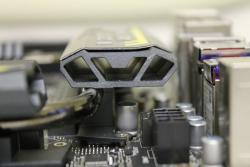 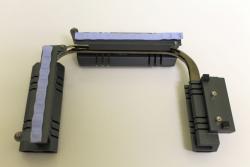 The heatsink sports a beefy 8mm heat pipe, to transfer the heat better amongst the heat sink trio. The smaller heatsink on the right hand side, is not directly cooling any chipset. As with most high end boards, the heatsinks are securely fixed by screw/spring combinations. No push pins allowed here ! 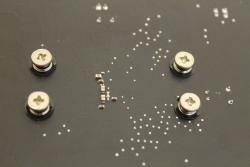 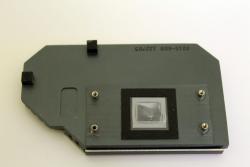 The Z77 chipset heatsink, again securely fixed, is overdimensioned for the cooling task it has to perform, aesthetics seem important :p 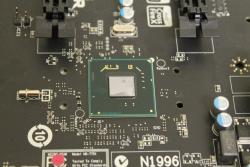 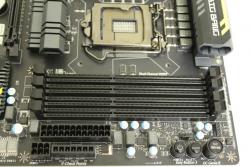 Near the 4 DIMM slots it gets quite crowded. The 24 pin power plug connector, an extra 6 pin power plug for enhanced power delivery, this when utilising multi GPU setups. Voltage checkpoints and the obligatory Power and Reset button are all located in the upped edge. MSI remains loyal to the OC Genie button ( version II btw ), by pressing this button, the MPOWER will boost your CPU's clockspeed to 4200MHz (depending on the CPU). 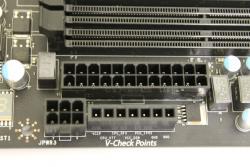 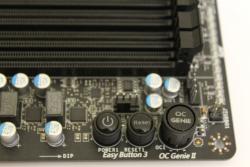