Swedish Company Fractal Design is renown for their sleek enclosures. In typical Scandinavian style their product range can best be described as: A minimalistic yet striking design, where less is more. Quality, functionality and pricing go hand in hand. Today we introduce one of their latest creations: The Fractal Design Define R4 enclosure. A mid tower case with main focus on silent operation, yet no compromises are made on configurability and functionality as the review will highlight. The Define R4 is the successor of the older R3 design. Now sporting two Silent 140mm iso 120mm version fans, improved cable management, two extra USB3.0 front panel ports and a more flexible design regarding big CPU coolers and ultra long power supplies and graphics cards. Let's unpack Fractal's latest creation.

After we removed the two panels we can clearly spot the black/white theme. This case provides excellent storage space. Via two HDD bays a total of 8 HDDs or SSDs can be installed on quick removable HDD trays. 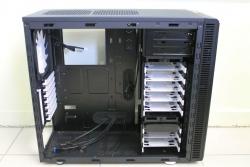 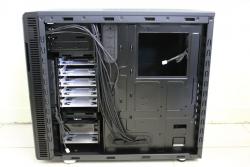 Typical for modern cases is the large cutout behind the CPU socket to facilitate installing your favourite cooler. Rubber grommet protected cutouts allow you to cleanly route your PSU and other cables behind the motherboard tray.

When reviewing silent cases, we noticed that the noise damping material is usually permanently fixed at the side panels or enclosure, thus limiting the expandability to install extra fans. Fractal's patented Moduvent design has got both worlds covered. Either leave the noise damping material in place for maximum silent operation or remove up to three of the patented Moduvent covers to install an optional fan for maximum cooling performance. ( two in the top panel and one Moduvent panel located in the side panel ) 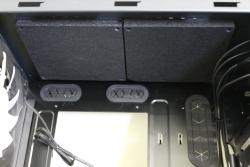 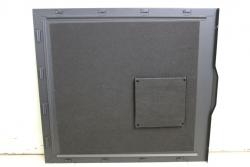 Storage wise this case is impressive as it allows up to 8 HDDs or an equal number of SSDs to be installed. The 8 arctic white quick removable HDD trays are divided over two removable HDD bays. The bottom bay containing up to three and the top bay maxes out at 5 HDDs. The top bay has the particularity to be able to being removed by unscrewing two thumbscrews allowing the entire unit to slide out. The HDD bays are, out of the box, installed perpendicular to the chassis. Though for those that prefer to have everything aligned, the two bays can be rotated 90°. 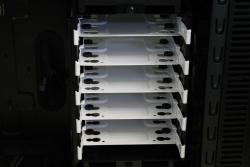 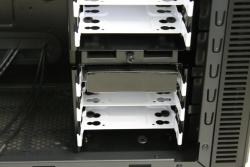 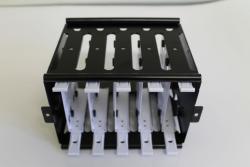 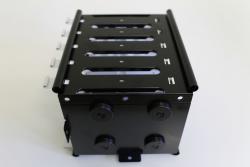 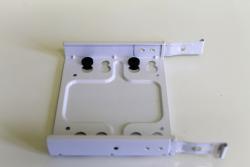 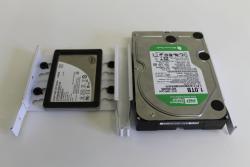 Like mentioned before, all the HDD trays support the installation of an SSD. When installing a normal 3.5 inch HDD, the storage device is damped by large anti vibration rubber grommets. 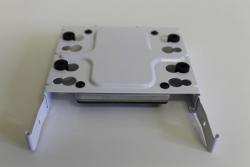 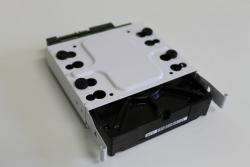