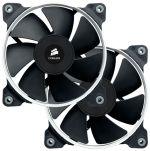 When hearing the brand name Corsair, most people will know them from their extensive memory lineup throughout the years. Yet Corsair have diversified their product line, now ranging from peripherals like keyboards, gaming mice and headsets to nicely crafted cases for every budget or need, even attacking the storage market with a decent and rapidly expanding Solid State Drive lineup. Cooling solutions going from basic air CPU coolers to all-in-one high performance liquid cooling solutions alike their Hydro H100 model.

Today we introduce the Corsair Air Series fans. Yes again a totally new product line to further enhancing performance of existing case and/or cooler designs , yet all at a more acceptable noise level. Time to discover what the fuzz is all about...

The text below is an extraction from the Corsair PR text:

3 things you need to know about the Corsair Fan series:

1) Design based on solid scientific research and engineering principles

The research in testing fans, done by the Corsair development team, showed that not many fans met the promised performance specifications. Corsair backs up their fan series, warranting the advertised performance, this based on their own solid research and sound engineering principles.

Again, via internal testing Corsair warrants that the specifications advertised, are identical to the performance the end consumer gets. No false claims, nor inaccurate listed specifications.

Corsair developed fans specifically for use as case fans and a seperate range designed for best performance as Heat Sink Fans (HSFs) and liquid-coolers radiators. 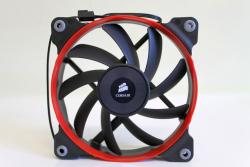 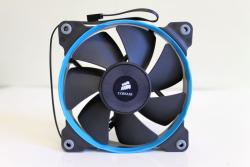 High Air Flow on the left and the Static Pressure model on the right.

But Corsair didn't stop with these two models. For each series they included a high rpm aka High Performance or a slower rpm Quiet Edition model, so that the fan choice can be optimized to suit the end user's needs and ears.

Each fan of the Corsair Air Series has it's own custom designed fan housing, by creating a duct shape housing, the airflow is directed straight onto the target. In the picture below you can spot the user replaceable fan ring. Corsair includes a red, white and blue variant in the box. 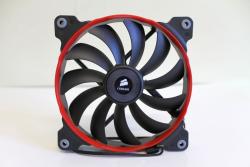 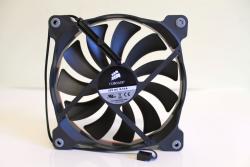 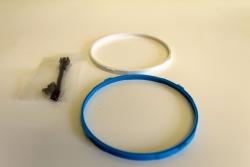 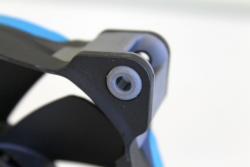 The rubber corner inserts are a nice feature to reduce the vibration created by the fan motor thus limiting the noise transfer from the fan onto the enclosure. Securing the fan via screws is however not a problem, as tiny plastic inserts are integrated in the rubber housing. Nice design by the Corsair team!

Corsair tested their blade designs with this Longwin Testbench to assure the labelled performance matches the real life one. 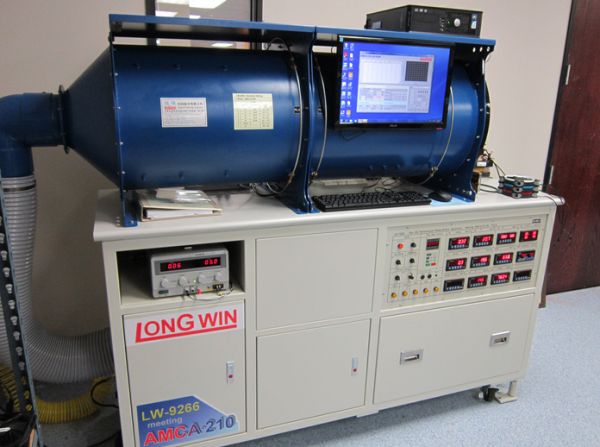 The Air Air Flow series come in a 120 or 140mm version. In a single fan or duo pack outfit ( the latter retail at a slightly cheaper price per fan ) Quiet and Performance models for the 120 mm version, however only a Quiet edition for the 140mm model. 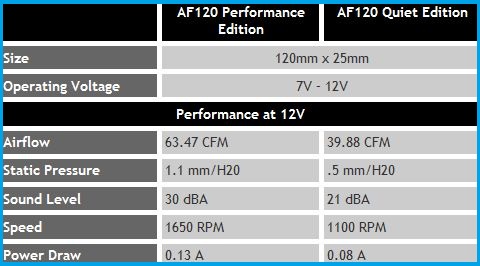 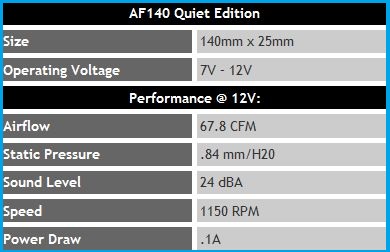 The SP ( Static Pressure ) series are only available in a 120mm model, again in Quiet and Performance configuration. 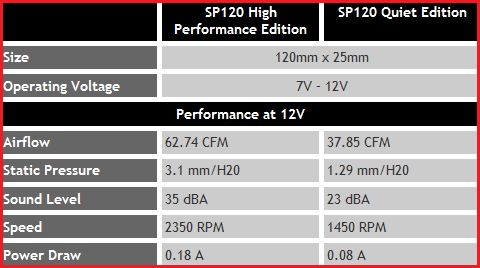