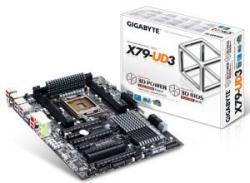 Even though main focus is lately on Ivy Bridge, let's not forget about Intel's High End range based on the X79 chipset. One of the main drawbacks of Socket 2011 is the total platform cost. Besides the quad core i7-3820, the hexacores versions cost a pretty penny. On top of that, most of the X79 mainstream boards are far from cheap. Prices of 250 euros and more are pretty common. Luckily for us Gigabyte and ASRock have got 'let's call them a more" budget friendly motherboard in their X79 lineup. Gigabyte's type numbering has always been kept pretty simple. Today's UD3 board is the entry board for their limited socket 2011 series. Limited, because Gigabyte only has got 3 boards left in the X79 range : the UD3, UD5 and a gamer orientated G1 Assasin 2 board. The X79-UD7 board has been EOL'ed. And till now there's still no sign of the X79-UD5 S(erver) version. But does a "cheap" board mean that the quality or performance is inferior ? Time to find out what this X79-UD3 has got in store for us.

We must applaud the effort from both Gigabyte and ASRock to be able to produce an X79 chipset motherboard at this price level. Both manufacturers skipped the 8 dimm slots and opted for just 4 slots. While this might sound as a drawback, you are still able to equip these boards with up to 32GB of ram. Which is more than plenty for most enthousiast users. For those that want even more RAM, they probably won't even think of buying one of these entry models and opt straight for a server or a more expensive variant. The UD3's box is pretty small in comparison with the UD5 and 7 board. Just the bare minimum is included, nothing fancy as extra USB3.0 ports, WIFI antennas or other sortlike accesoires. 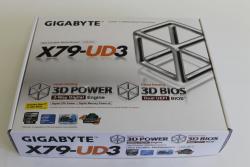 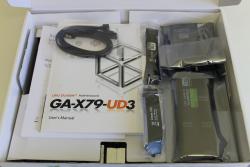 This ATX sized board is 4 way SLI or 4 way CrossfireX compatible. Yes you read it correct, this little baby can house up to 4 GPU's. All the SLI and Crossfire bridges are included in the package. Pretty darn good value not ? 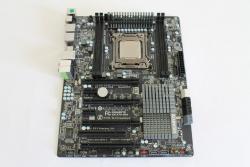 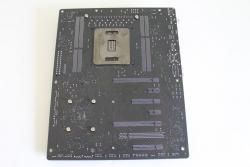 Once you go black you never go back, Gigabyte's X79 offering looks very classy with it's black PCB. The dark grey heatsinks and black plastic really give it that pro look. Of course this adds zero to the performance, but some people buy certain boards just based on their looks. 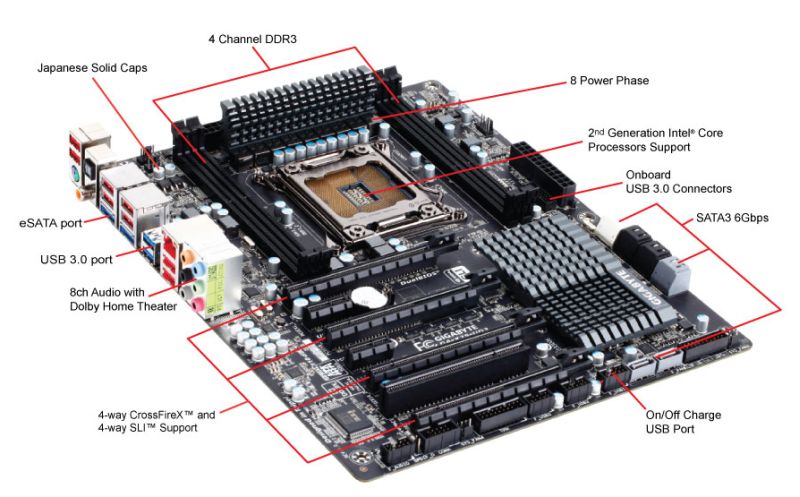 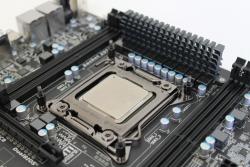 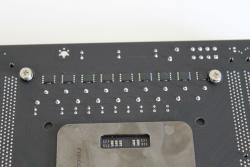 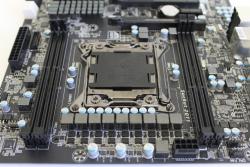 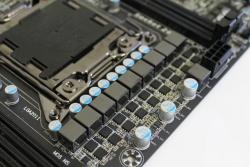 The UD3 boards sports a 8 Phase power design, luckily Gigabyte didn't do any cutback in the PWM department and equipped this board with high quality POScaps and PowerPAK mosfets. On the bottom left picture you can cleary see the 4 DIMM slots, supporting out of the box max 2133Mhz RAM. But via overclocking you can go up higher in memory divider. Noteworthy a pretty clean socket, so very easy to insulate for those that want to bench on this board.

Weirdly enough the UD3's PWM heatsink is better dimensioned then the one we found on the UD5. To be honest the UD5 heatsink looked quite flimsy. Okay the latter was connected via a heatpipe to the PCH heatsink. But this reviewer has never been a big fan of heatpipes for cooling chipsets. 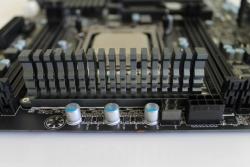 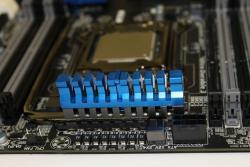 The PCH chipset is uber dimensioned and sports a very nice design. But besides it's looks, it got barely warm during SLI testing. 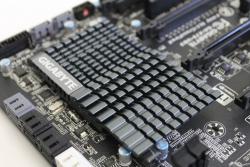 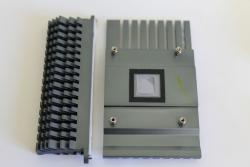 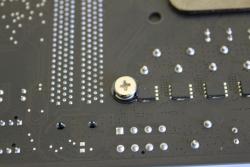 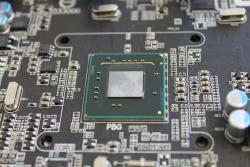 The chipsets are screwed down for a rock solid mount, no fragile push pin system. Job well done Gigabyte.