It seems more like another GPU release. If Intel keeps up this pace, we are upgrading at least once a year. The Ivy Bridge CPU is a so called "Tick" version. Which means nothing more or nothing less then a "Die" shrink of the massive popular Sandy Bridge lineup. The codename Ivy Bridge was derived from a little english town called, yep you guessed it Ivybridge. This town thanks it's name due to an important bridge that was the only one to give access to the village. This particular bridge was covered with a sort of weed, called Ivy weed. So it doesn't take a rocket scientist to close the puzzle. Most important factor for the Intel PR people was that there was always a direct link to the Sandy Bridge brand. 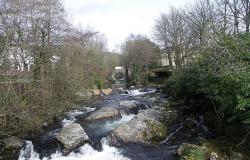 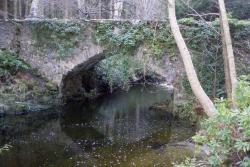 As mentioned before Ivy Bridge is a "Die shrink" of the Sandy Bridge lineup. Going from 35nm to 22nm. To give you an idea how tiny it is : you can fit over 100 million transistors on the head of a pin. Really incredible stuff don't you agree ? But Ivy Bridge is more than just a "Tick" in Intel's CPU schedule. First innovation is the brand new 3D Tri Gate transistor technology. These will be replacing the ancient planar 2D transistors in all of the upcoming processors. Intel's vision to produce a more compact, faster, yet more power efficient CPU's needed a major overhaul. Plus to adhere to Moore's Law, to double the amount of transistors on an integrated device, Intel needed to step away from the older transistor technology. Without going too technical: the Tri Gate transistors allow for faster switching, more power transfer, thus more energy efficient clock per clock. 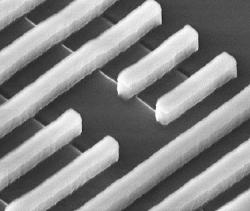 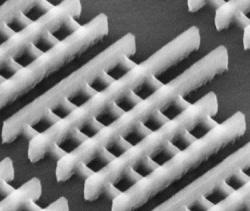 The older transistor on the left, on the right the brand new kid in town : the 3D Tri Gate transistor, Why is it called 3D ? Because the current can flow now in 3 dimensions, while before it was only in one plane. If needed Intel can insert more fins to create an even bigger power flow. Another amasing thing is that the idea of these new transistors originated in 2006. In 2008, Intel decided that this brand new technology would be be used in it's 22nm CPU's. Talk about planning ahead.

By applying the 22nm fabrication it allows Intel to put 1.60 billion transistors on a 160mm² Die. Just to compare with Sandy Bridge, which had 1.16 billion transistors on a 212mm² Die. The CPU TDP has been lowered from 95 watts to 77 Watts. According the Intel reps, the platform TDP ( CPU + Mobo ) is at 95Watts. This refers to the printed value on the retail boxes. Of course tech talk is nice, but how efficient is it performance and power wise ?

Second big novelty is the upgrade of the integrated GPU ( iGPU ) Both of todays tested Ivy Bridge CPU's have the HD4000 onboard. Sporting DirectX 11 support, own dedicated Level 3 iGPU cache, lower power consumption, and in some applications up to twice as fast as it's predecessors. Sounds too good to be true. Is Intel starting the witchunt on AMD's LLano/Trinity CPUs ? The other Ivy Bridge CPUs will sport the HD2500. The latter should be around 10-20% faster than the HD2000 Sandy Bridge versions.

At the official launch on the 29th of April only the quad core models will be available. In May the first Xeon server branded CPU's will pop up. The mobile market has to sit it out till the 3rd of June. The rest of the desktop lineup will appear in the shops early September. Ofcourse the mentioned dates can be changed on the fly...