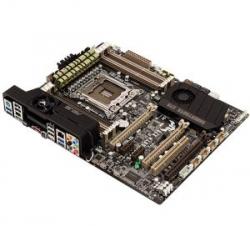 The ASUS Sabretooth lineup always has been part of a little controversy. Some had no idea why the TUF series ever had to be made. Claiming high Durability and Reliability. So the other ASUS boards were inferior then in build quality ? Wouldn't they survive the torture test that the Sabretooth series do ? I've had the Sandybridge P67 version for internal testing and must say that it was a joy to work with. Even when benching with LN2, the board remained hassle free. It was no surprise that with the launch of Sandy Bridge-E another Sabretooth would appear on the market. Today we are gonna have a look at the latest addition to the TUF series : The Sabretooth X79.

A closer look at the Thermal Armor solution. Either one 5cm fan, called Turbo Engine Fan, on the X79 chipset heatsink and passive cooling for the PWM heatsink solution. This fan will keep the chipset cooler, especially when using dual GPU solutions. To further aid heat dissipation off the MOSFET area,  you can opt to mount the included 2nd Turbo Engine Fan. 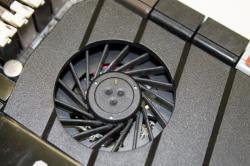 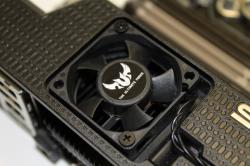 The prints on both of the heatsink solutions confirm good conductive contact. 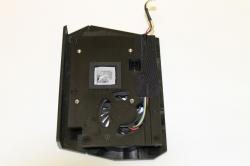 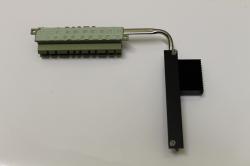 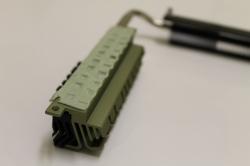 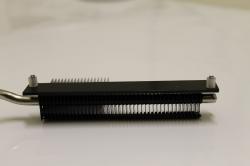 The entire cooling solution is mounted securely by spring supprted screws. No fragile plastic pins on this ASUS board. 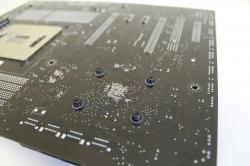 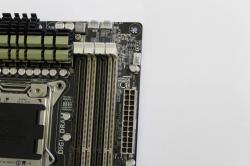 On the picture on the right you spot ASUS's MemOk! button. Very handy if you pushed the RAM too far. Just press this button and the MemOK! feature will detect failsafe settings for the used memory. It will boot your system in no time. Too bad it's positioned a bit awkward just above the 24 pin power connector. Talking about press buttons, it would have been handy if we had Power and Reset buttons mister ASUS. 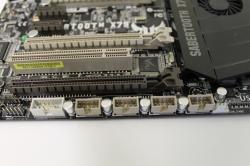 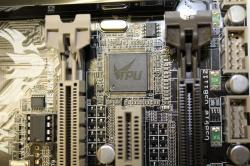 Like mentioned before, USB support is massive on the Sabretooth. 14 x USB2.0 via the X79 chipset. These are divided over 6 black ones on the IO back panel and 4 connectors at the bottom of the board. Up to 6 x USB3.0 via the ASMedia controller, with 4 blue ports on the IO panel and two via the onboard green connector near the 24 pin power connector. Only one removable bios chip on the Sabretooth, but with the Flash Back option you got an extra safety net.