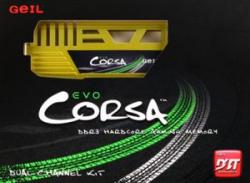 In the last few months the major hardware spotlights where briefly focused on AMD's Zambezi platform and now more and more on Intels high end Sandy Bridge E platform. Though let us not forget what Intel refers to as the mainstream platform aka socket 1155 Sandy Bridge goodness. The brand new E version requires quad channel action, it's little brethren only in need of dual channel. Todays GeIL dual channel 8Gb kit, comprises for you wiz kids out of two 4Gb dimms at 2133Mhz rated speeds. No cutbacks on timings : CL9-11-9-27 is pretty good stuff. Usually we see high quantity kits running at low speeds (1600ish Mhz) On top of that usually coincides with sluggish timings too. For those that are a bit confused by the brand name : GeIL stands for Golden Emperor International Limited, nothing more and nothing less. Pretty sure most were thinking of something else. Let's open up the kit and see what we can do with this high end 8Gb kit.

We grabbed this from the GeIL webpage :

Corsa, the Italian word for “race”, hence the name for the 3rd generation of GeIL’s DDR3 Gaming Series Memory - EVO CORSA .Which symbolize extreme speed as a race car on the track. The Metallic-Amazon-Green finish of the EVO CORSA heatspreader is derived from the famous German race track - the Nurburgring a.k.a. “the Green Hell”. The CORSA Heat-spreader is designed with MTCD - Maximum Thermal Conduction & Dissipation for superior cooling performance. Ranging from DDR3 1866MHz and up, the EVO CORSA is designed for the latest Intel & AMD chipsets for maximum performance and compatiblity. EVO CORSA is the new DDR3 performance benchmark.

Pretty bold statements there, making my enthousiast heart pound a little bit faster. Our test kit was one of the two high end versions running at 2133CL9-11-9-28. Combining the best out of both worlds for socket 1155 : high speeds with pretty solid timings. Even though timings aren't that worthwile for a gaming setup, it's always nice to have them on your side for extra tweaking headroom. The packaging is a nicely looking box with both the dimms protected in a tough blister package. No ram fan is included, but what do you expect from a sub 100 euro kit. 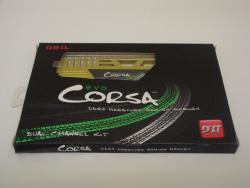 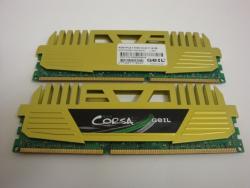 When popping the heatspreader of the dimms and thus removing the Evo Corsa Edition Heat Sink System with MTCD technology ( what's in a name lol ) we spot own (re)branded IC's. GeIl selects these IC's for their lineup via the DBT technology. DBT is the abbreviation of Die-Hard Burn Technology. What it all boils down to is that the IC's are pretested for speed and then 100% certified to run at them speeds, by testing them in a hot 100°C stress test machine. We saw a dummy of such a torture machine at the CeBIT GeIL booth ( for a piccie plz turn the page ) 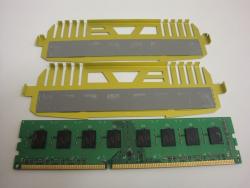 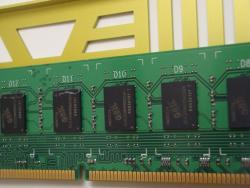 The Evo Corsa line is available in the mentioned below versions. Not as elaborate as some other manufacturers, but the main speeds/timings and price groups are covered. Only one colour scheme is available for the heatspreaders, baptised : Metallic amazon green finish. 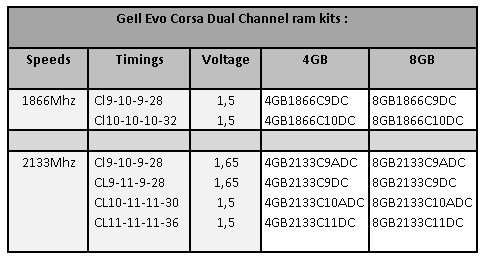 Those that strictly want to adhere to the Intel Dram Voltage specifications for Sandy Bridge CPUs have to pick out of the various 1.5Vdimm versions. For the enthousiasts the 1.65Vdimm versions offer tighter timings and at my knowledge zero risk for your SB CPU's Integrated Memory controller. I have been running 1.67-1.72 Vdimm since the launch of the socket 1155 line and had no issues on any of my CPU's.