Last week we attended a conference call from AMD. Subject of the day was the new 7 series of Radeon HD videocards. First one from the new 7900 Series is the flagship in single GPU configurations, the Radeon HD 7970. Please be aware this is only the presentation based on the official slides, the actual review will folllow soon here at Madshrimps. Let's see what the new high end AMD cards have to offer. 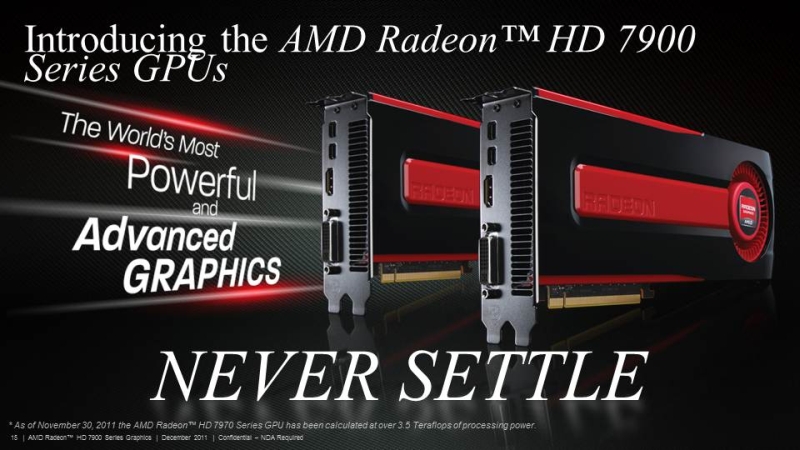 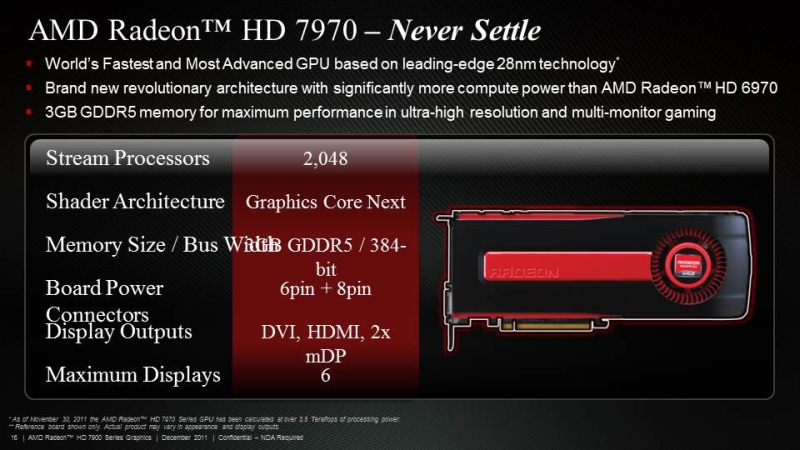 The AMD Radeon HD 7970 GPU itself has 32 compute units, for a total of 2048 individual stream processors. Each board will come with 3GB of high speed 5.5Gbps GDDR5, which is hooked up via a 384bit memory interface in order to offer a staggering 264GB/s… but that kind of memory bandwidth is what you want when you’re multi-sampling across multiple high-resolution displays, especially in stereoscopic modes. That kind of engine and memory bandwidth call for a lot of data, and this is where PCI Express 3.0 becomes important.

In terms of power connectors, the HD 7970 will have an 8-pin and a 6-pin connectors, and the board is overdesigned to use up to 300W, but will use low-to-mid 200s in standard gaming (this leaves a lot of headroom for overclocking).

Each HD 7900 Series board will have a dual link DVI-I connector, an HDMI type-A, and two miniDPs: 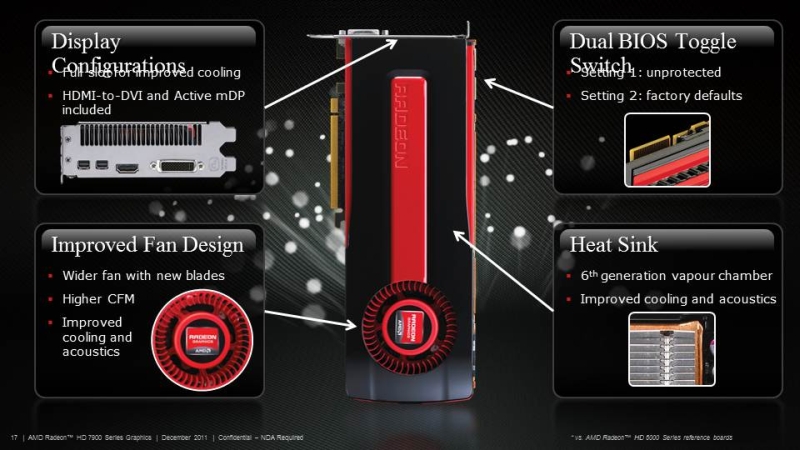 Let's start on that display configuration. The first question you might ask would be “why remove the stacked DVI connector?”. AMD says that we won't need it any more and that they will be including an HDMI-to-DVI adapter in the box, which means you can get the same functinality that you had on high end HD6000 Series boards anyways. Additionally, they will be shipping an ACTIVE mDP-to-DVI adapter with every board, so you can get three DVI functionality out of the box.

Just like on the HD 6900 Series products we have two BIOSes on every board so that you can play around with it and always have a safe setting to which you can revert.

Now that brings up to the fansink. They have moved over to a new fan design with larger, wider blades for improved air flow. This is optimized to push more air at lower acoustic levels, and gives the card great acoustics. In addition to that, they have opened up that second slot on the IO bracket to avoid any turbulence (read: noise) in the airflow. This alone is giving a 7C-8C GPU temperature benefit, which we may recall from the HD6990. This is the 6th generation that they have used vapour chamber on their high end cards, and they use a “multi-step” technology that allows them to enlarge the overall size of the vapour chamber leading to better thermal dissipation. Lastly, they have kept improving that phase-changing TIM and have squeezed out an additional 2C benefit over Antilles. 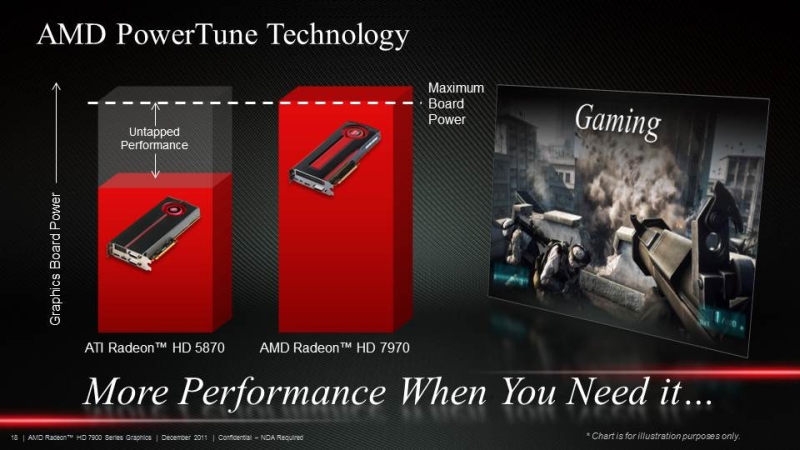 PowerTune puts the GPU in control and it can push it’s clock to fill up that thermal headroom when its available.Efficiency under load is one thing, but idle is a big part of that too.

PowerTune is a technology that they have introduced with their HD 6900 Series, and has become an integral part of our entire 28nm lineup.

PowerTune is a integrated on-die system of two microcontrollers by which the GPU can A) calculate it’s power consumption at any given time, and B) adjust it’s clock speeds up or down if it detects power headroom (or lack thereof).

Why is this beneficial? Well if you look at a product like Cypress, which was a 188W-capable board, it often used far below that. Why? Because it was a 188-W board in SOME cases, like Furmark and OCCT. Most of the time in games it only used around 140W. Our 28nm GPUs have become aware of when this happens, and have the ability to adjust their own clock speeds thousands of times per second to take advantage of power headroom. The end result? Because the GPU is aware, we can crank up that base clock speed and minimize any untapped performance.

But efficiency is not just about what you can under load. Idle is a bit part of that too, and that is where the next technology comes in. 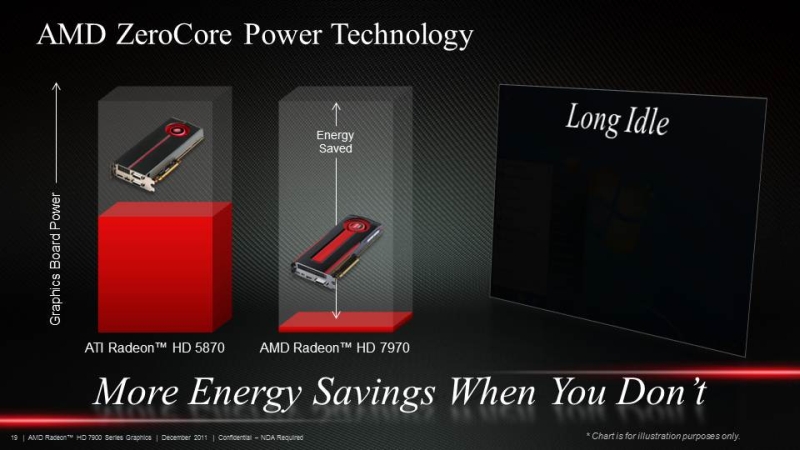 The Southern Islands family will be the first product to use a Zero Power Long Idle state.

Let's first explain what Long Idle means, then how they achieve this. Long Idle is what your system does when you leave it on and walk away. If you leave you system on overnight, if you have a media center softly purring away in your living room, or even if you go to the bathroom and Windows turns your display off after a few minutes. Essentially anytime that no active display is being driven. To benefit from this even further, we can set Windows to blank the screen after a smaller period of time, to save power.

When the driver gets that signal that the screen has gone black, voltage to the 3D core is cut and also to the memory controller; AMD puts the GDDR5 into a self-refresh mode, they cut voltage to all of our display engine, and that gets us down to a GPU power of less than one Watt, or about 2-3W at the board. All that is kept alive is the PCI Express interface, and we are able to jump in and out of this state in milliseconds.

So that is a massive leap forward compared to other GPUs for long idles, but AMD hasn’t settled on static screen power either (when the display is active). Through a few features like SCLK deep sleep, DRAM stutter mode, and frame buffer compression, they are able to get the static screen power of Tahiti down to 15W, a 40% improvement over Cayman. 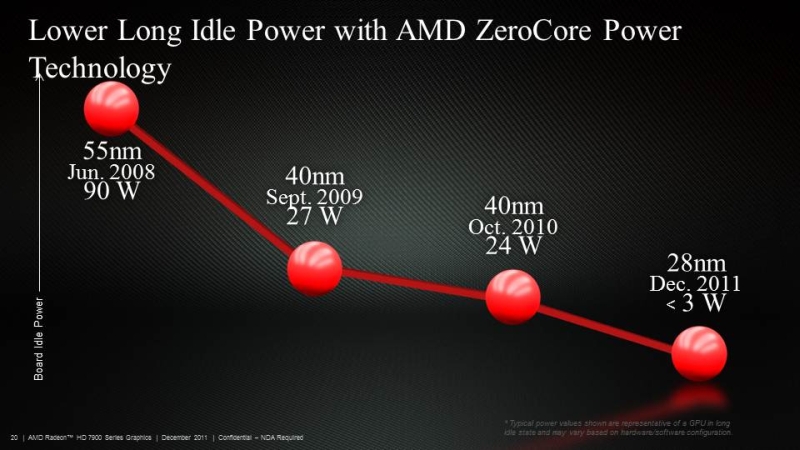 Factor of 30x over 3 years ago

So this is something that every Southern Islands user will be able to take advantage of, but here’s something else special: 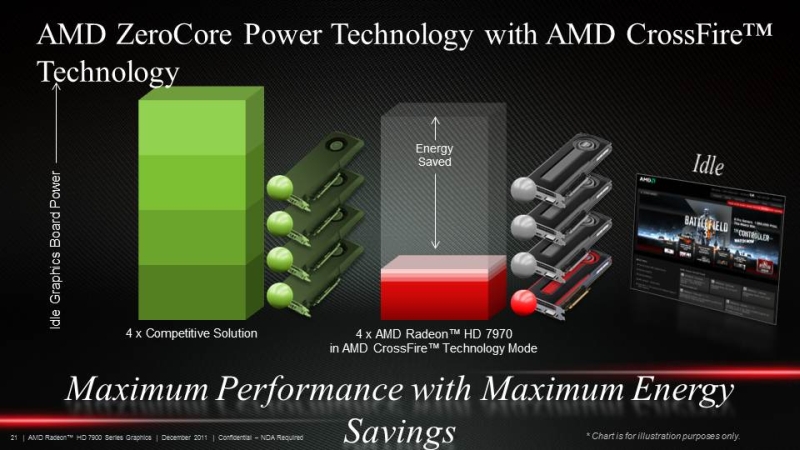 It was mentioned that these cards can enter this state whenever no display is actively being driven; well that’s perfectly suited for Crossfire.

Take a 4-way multi-GPU system as an example. If the graphics cards don’t have Zero Power, each one of them will purr away even while you’re not at the desktop, even though they aren’t doing anything. That could be up to 100W of heat and power being used while you browse the internet.

With Zero Power however, each of those slave cards will drop into a BACO state and go to sleep until they are needed. That means you can have your 4-way Crossfire system idling at roughly 20W of GPU power. That’s less than a single Cayman.

And if power isn’t enough, they're not settling for noise either. As soon as a enters Zero Power mode, they will turn the fan off to make sure it’s not producing unnecessary noise. Even if you’ve popped four cards into your system, you’ll only have one fan spinning slowly while you’re at your desktop. 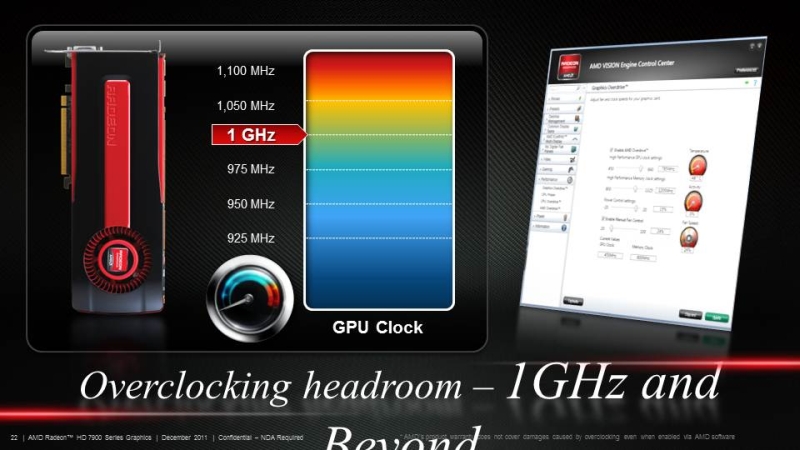 Now let’s take a look at overclocking. At default, each HD 7970 will hum away 925MHz default clock on the engine and 5.5Gbps on the memory, and that’s enough to blow away any other card on the market. But we’ve seen a LOT of headroom on these. AMD has regularly seen these cards OC past the GHz level and even past 1.1Ghz. On the memory side, they have seen boards get north of 6.5Gbps. 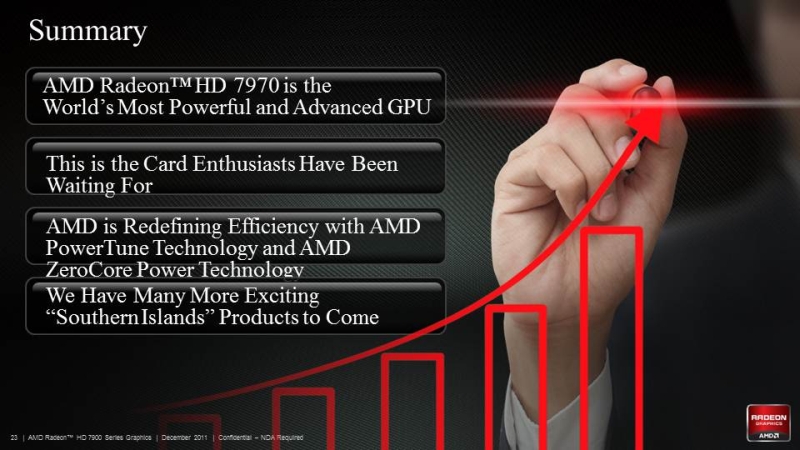 So in summary, Tahiti is breaking the boundary of what you can get out of any GPU on the market today. It has a new architecture and is packed with both graphics and compute horsepower.

Not only is it the most powerful, but it’s also the most efficient GPU on the market. It’s able to not waste any power or performance when you’re gaming, nor will it waste power or produce unwanted noise when you’re not.

There is a lot of pent up demand in the market for the next big thing, and the HD 7900 Series is ready to deliver just that – the ultimate gamer’s GPU.