The PX-PH500U3 USB 3.0 HDD from Plextor comes with a lightweight casing and sports a professional, clean design. The performance is good for a 500GB 5400RPM drive and for added value we get three separate applications already preloaded on the HDD; the applications are full versions, with the serial numbers supplied in the box. 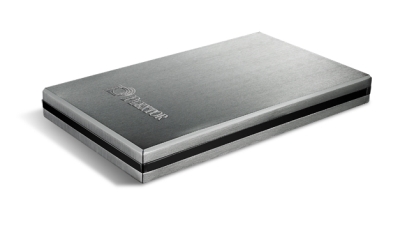 At first I would like to thank Plextor for offering a sample of their PX-PH500U3 USB 3.0 Portable Hard Disk Drive for testing and reviewing.

"The History Of PLEXTOR

The history of Plextor goes back almost 100 years. Shinano Kenshi Corporation was founded in 1918 to manufacture Spun Silk Yarn, which at the time was one of the most "High-Tech" industries in the world. The silk required a very delicate and precise production process. The right to wear silk was reserved for the highest government officials and dignitaries only, and therefore the quality standards were extremely high. In these circumstances, Shinano Kenshi developed their own business philosophy: “Never Compromise, Always Think Quality”, because only providing the best quality could satisfy their exceptional customers.

As the years passed, Shinano Kenshi embarked on other industrial markets that would grow more progressively, while maintaining its proud history in the Silk Industry.

In the 1960s, Shinano Kenshi decided to diversify its business to electric motors, a fast growing market at the time. Despite changing its core business, the company kept its business philosophy, “Never Compromise, Always Think Quality”. These ventures insights led to the successful expansion into technology-driven, knowledge-intensive fields, such as Electrical Division, Electronic Equipment Division and Printing Equipment Division.

In the 1980’s, Shinano Kenshi expanded their sub-contracting position by recognizing the evolution of the digital age with the advancement of compact discs replacing the older generation of analog tapes. The company began to manufacture their own compact disc players for the audio industry, and developed a separate brand for the department. The Electronic Equipment Division introduced its first CD-ROM optical disk drive under the TEXEL brand name in 1989. Faced with the prospects of a healthy and ever-increasing demand for its products, Shinano Kenshi identified the importance of this segment, with the Professional and IT markets demanding performance-oriented products. The company naturally transitioned into the optical disc drive industry. Through every generation of optical disk drives, Plextor has continually sought ways in which its CD-ROM's, CD-RW's and DVD+R/RW's could stimulate market demand by offering higher speed and higher reliability devices, while winning numerous awards worldwide.

While maintaining and strengthening its core competences, Shinano Kenshi continued its global expansion by establishing subsidiary companies and promoting its products on a worldwide basis. In 1982 Shinano Kenshi began to expand overseas. The United States was the first country where the company started overseas operation. PLEXTOR US was officially founded in 1990 and three years later a European branch (PLEXTOR EU) was opened.

The subsidiaries are chartered with the continual growth of Resellers and OEM's in their respective territories, who have come to rely upon Shinano Kenshi for performance, quality oriented and technically superior optical peripheral products. In 1994, Shinano Kenshi announced their new brand name PLEXTOR for their digital technology products, including optical disc drives.

Plextor CD-R/RW drives were introduced in 1998 with technologies developed by the corporation in support of the market growing demand for CD-ROM's. DVD+R/RW were added to the Plextor product line in 2003. High performance drives enable our users to write and re-write data on a stable platform that has evolved throughout the years. Plextor has also invested heavily on the certification of media to give our users a wide range of compatibility between the various manufacturers.

Plextor's CD-R, CD-RW and DVD+R/RW optical disk drives have been tested worldwide and evaluated as the "Professional Choice" to satisfy even the most discerning customers. Plextor products have been adopted by financial institutions and government agencies, which require highly reliable data storage technology. Recording studios have come to regard the Plextor products as the "drive of choice," which they can rely upon for the accurate extraction and creation of Digital Audio.

The business philosophy “Never Compromise, Always think Quality” generated from tailoring luxury silk for the highest dignitaries did not fade over time but became the company’s core value. Also in the optical storage business, Plextor provided the best quality products to high-end customers and professional users in a heavy duty environment, instead of general users. In order to satisfy these professional users and to meet their strict specifications, PLEXTOR always invested many resources in R&D and product testing before any product was released to the market. In line with its high quality standards, Plextor always offered excellent warranty conditions.

The origin of the name PLEXTOR

The PLEXTOR brand name was created in United Stated in 1993, and comes from two parts: PLEX and TOR.

“PLEX” originated from the suffix of “multiplex”. Here, “multiplex” means relating to a system of transmitting several messages or signals simultaneously on the same circuit or channel, just as making silk which is being composed of many materials and needed a precise and delicate process.

“TOR” originated from motor, which is the first product with Shinano Kenshi’s core technologies in electric industry.

The Vision of PLEXTOR

The Core Values of PLEXTOR

Confidence – Plextor takes pride in its products. We have high standards and our goal is to deliver the highest quality products to each market segment that we are serving.

Quality – Plextor stands behind every product. All our products go through stringent quality checks and intensive testing procedures before they are released to the market.

The DNA of PLEXTOR

The following characteristics describe the identity of the PLEXTOR brand: