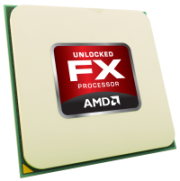 After the hectic week of testing this brand new 8 core CPU from Advanced Micro Design, it's time to go a bit deeper. In this review we are gonna retest the Bulldozer CPU versus it's main rivals. Being AMD's own Thuban 1090T, Intels 2600K and the almighty Gulftown 990X CPU. Mainly because our test suite had to be slightly updated to give the new Zambezi architecture a shot to maybe show it's true potential. But most important to show some people the real deal. I've myself read through a few articles on AMD's latest flagship. To be honest some reviews made me wonder if they were really done or just a copy paste of the marketing slides. It was also kind of funny to see some renown websites include completely GPU bottlenecked game benchmarks. Kinda hard to tell the importance of the CPU part don't you think ? Even if they call it real world scenarios, it still made my eyebrows frown as they hardly used any game tests in older reviews. Why now include them ? So without boring you too much with my frustrations, let's get it on...

First up some newer benchmarks tested on the Asus Crosshair V (Bios 9911) for the AMD CPUs and for the 2600K on the ASUS P67 Dlx and finally the i7 990X on the Asus Rampage 3 Extreme.

Cinebench Release 11 is up first. We've always used the reliable Release 10 version, so time for a new updated version. 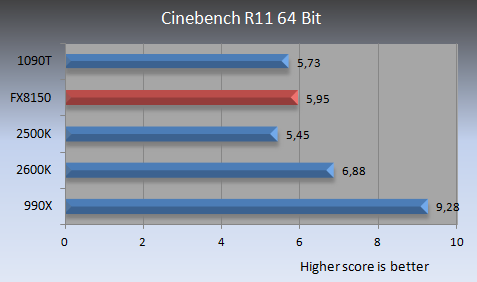 No surprises here as the outcome is similar to the older variant. Bulldozer with it's "8" cores pulling away from the hexacore Thuban 1090T and Intels 2500K. The 2600K and gulftown 990X are out of reach.

We've read some complaints about not including enough rendering benchmarks, so POVRay and Specpreview were installed on our test hard drives. That's more than enough rendering action my heart can take. 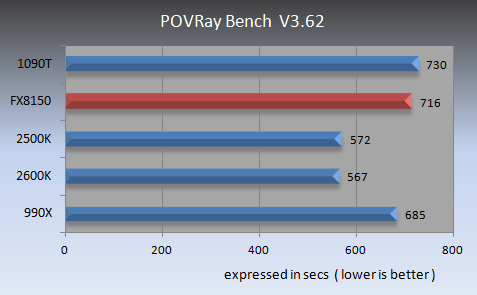 The brand new FX again pulling away from it's predecessor, rendering 14 secs faster then the 1090T. The Sandybridge CPUs are going completely bezerk in the POVRay test. The same can be concluded from the SPECpreview benchmark suite. This time the FX 8150 is near Gulftown performance. Yet it's closest main rivals price wise the 2500K and 2600K are lightyears ahead in performance. 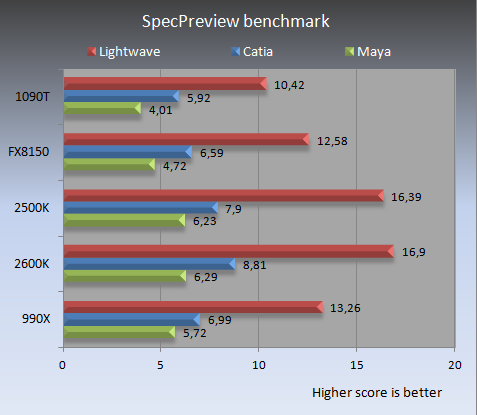 The Fritz 12 Deep Chess Benchmark clearly gives away the raw calculating power of a CPU architecture. Utilising all the cores to it's fullest potential. The Bulldozer FX-8150, ahead of the 1090T and 2500K. The latters bigger brothers are untouchable in this test. 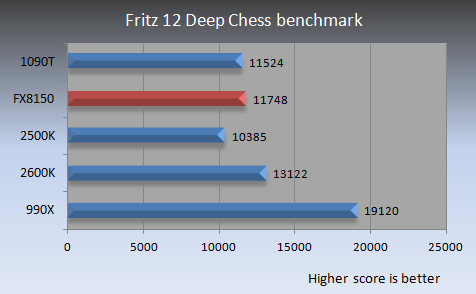 For allround PC performance Futuremarks Pcmark test suite has always been a reliable tool. Stressing the CPU, GPU, HDD's as the entire complete subsytem. The Pcmark05 suite already takes a while to complete, the 07 version is an even longer stress test. 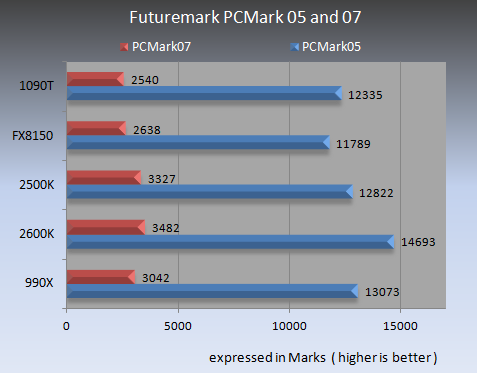 In the older PCMark 05 the FX 8150 has a hard time to unleash it's architectural potential, finishing dead last. In PCMark 07 it can just avoid that unhonourfull last place, sadly still not being able to keep up with the tested Intel offerings. 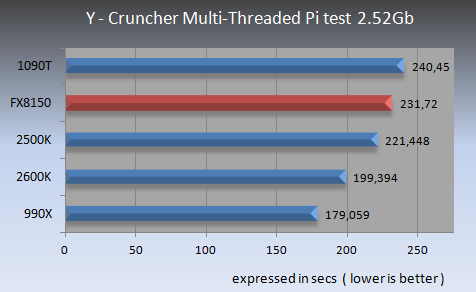 A lot of readers and forum members still have doubts about the SuperPi test. Since it's purely single threaded, they doubt the value of this benchmark. As it hardly benefits from a multi core environment. Time to pull out a multi threaded version of Superpi (on AMDs advice). We opted to use the 2.52Gb test nr 5, as it was a good balance between the available ram in Windows 7 and the installed 4Gb. ( i7 990X ofcourse had 6Gb installed in triple channel config ) While in SuperPi the FX had a hard time to come even close to the 1090T, it's the other way around now. The extra "cores" give it a slight 9 secs advantage. The Intel CPUs still outclass the AMD offerings by miles...

Latest test before we plunge ourselves in some added game titles is the latest winrar 64bit version. The included benchmark tool calculates the MB/s our beloved CPUs can archieve. The AMD FX-8150 taking an impressive victory here. Without a doubt the fastest Winrarring desktop CPU on the planet at the time of writing. 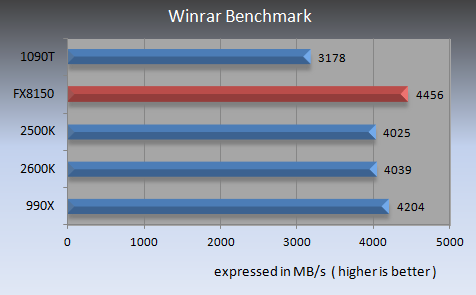 Comment from Teemto @ 2011/11/02
Always been a fan of AMD, but Bulldozer can only be described as one thing:
Epic fail.

Comment from cesariuth @ 2011/11/02
Why you test only benchmark??
some space for test soft of the real world?
Comment from jmke @ 2011/11/02
yes why not test games or compression software or rendering performance ?

Comment from leeghoofd @ 2011/11/02
First up Cesariuth I don't have resources to real rendering software, secondly it is not my interest at all and I find it already very time consuming enough. The test suite in it's current state will highlight most of the performance issues or not from a CPU/platform.

Like said in the two conclusions, this CPU can be good with specially designed software. But in most apps, and for sure with older applications it will not be up to the task to handle even the competition in it's own ranks...

Let's hope for AMD Piledriver will get a bigger boost then the expected 20% ... Piledriver will probably be what Bulldozer should have been from the start...
Comment from Teemto @ 2011/11/02
I seriously doubt it. Optimizations can help but to bridge the gap with Intel (on Sandy Bridge - not even talking about Sandy Bridge-E) they'd have to have made serious design error in the initial design which somehow has crippled performance and which can then be fixed.

But how realistic is that?

But it's not just the performance, the power consumption of this thing is also not up to current standards.

Scrap everything and start working on an FX2 with real cores instead of modules. But I doubt they have the funds to do it.

Try to add a GPU to it and make a higher end APU? But that would've only worked if the FX power consumption had been ok.

Stop with trying to make high end CPU's and focus entirely on their current APU products.

Maybe start looking into some ARM products?
Comment from cesariuth @ 2011/11/02
Thanks leeghoofd for your answer, but I think that BD have more performance in the real test vs SB , or benchmark don’t say much of the real performance of this chip...
Benchmark is always benchmark...but this is my opinion I don’t know if this is the opinion of all.

I hope that Pelidriver optimize more than 20% or close to this.

Thanks!
Comment from leeghoofd @ 2011/11/02
I know a benchmark is a benchmark, but one of the main reasons that the initial article had this follow up was due to the "rigorous" testing by some highly acclaimed websites... How to show a CPU works well : put the GPU on it's knees and see how they all score the same... that's ridiculous in my book... it was clearly in the reviewers guide shown how we should have done it it. But them proposed tests setups just looked to be more chosen to make a mainstream product look great...

Real rendering software doesn't cut my budget mate, I also have got no experience in that department. I know Flanker is doing some tests with BD at ExtremeSystems.org Though as always take everything with a grain of salt... I think you will find him in the AMD section

Comment from Massman @ 2011/11/03
It's funny how it's really hard to find these so-called "real-world" applications. No one is using those, but apparently only those hard-to-find apps are the only ones that are showing the "true power" of Bulldozer.

Fyi, you guys might want to read this: http://www.brightsideofnews.com/news...rformance.aspx
Comment from Teemto @ 2011/11/03
Seems there's others which are not afraid to tell the truth

http://www.atomicmpc.com.au/Review/2...sappoints.aspx
Comment from WebNavi @ 2011/11/29
After the hectic week of testing this brand new 8 core CPU from Advanced Micro Design, it's time to go a bit deeper. In this review we are gonna retest the Bulldozer CPU versus it's main rivals. Being AMD's own Thuban 1090T, Intels 2600K and the almighty Gulftown 990X CPU.