Time again to fire up our overclocked S775 quad core CPU. Still being able to keep up with most modern games. Ofcourse newer platforms are more responsive and will pump out higher FPS.  Yet with a modern videocard this setup still warrants hours of fierce online gaming action. Hence why we still include this platform, next year the socket 2011 CPU and probably Ivy Bridge will be added to the charts.

We compare all of Corsairs offering versus the two previous generation CoolIT products. For air cooler reference I included the Thermalright VenomousX cooler in a push and pull fan configuration. 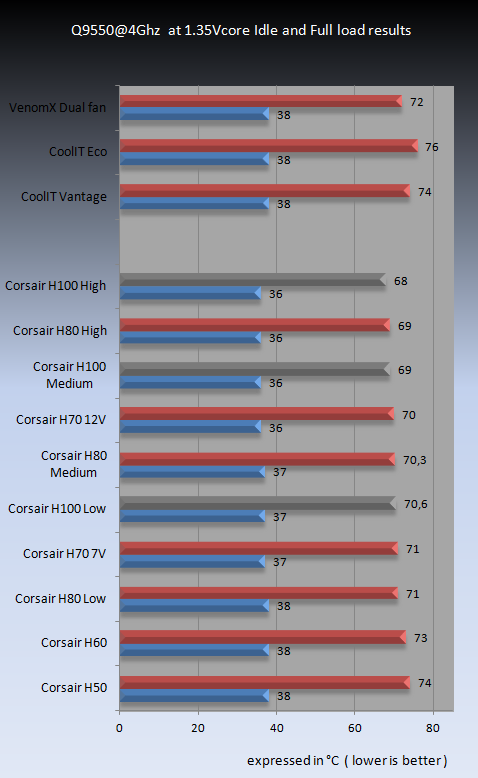 As you can see the Hydro 100 puts itself on top of the charts. When lowering the fan setting to balanced, it still manages to keep up with the H80. However the latter is running full blast, thus generating a lot more noise. It's quite obvious to the ears that the fans of the H100 are rotating at a lower speed then the H80, even when performance mode is selected. It seems the bigger dissipation cooling surface keeps the fluid temps far lower and/or the algorythm of the liquid temp vs fan speed has been fine tuned.